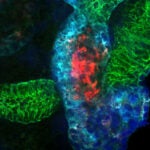 Turning off a single gene leads to a roughly three- to fivefold gain in the yield of laboratory methods for producing red blood cells from stem cells, according to a multi-institutional team led by researchers at Harvard-affiliated Dana-Farber/Boston Children’s Cancer and Blood Disorders Center.

These findings, published in Cell Stem Cell, suggest a way to cost-effectively manufacture red blood cells from stem cells; the patients who could potentially benefit include those who cannot use blood currently available in blood banks.

Previous research has shown that it is possible to force different kinds of stem cells to produce transfusion-grade red blood cells in a laboratory, but, at $8,000 to $15,000 per unit of blood, current processes are expensive. This is the first study to combine stem cells, powerful gene editing tools, and data from genome-wide association studies (GWAS).

“There’s a variation in SH2B3 found in about 40 percent of people that leads to modestly higher red blood cell counts,” Sankaran said. “But if you look at people with really high red blood cell levels, they often have rare SH2B3 mutations. That said to us that here is a target where you can partially or completely eliminate its function as a way of increasing red blood cells robustly.

“There are many patients with rare blood types or blood disorders who need very specific kinds of blood and cannot accept most donated blood,” Sankaran continued. “Also, there are patients for whom there is a possibility of using red blood cells as a way of delivering therapies.”

Sankaran, an assistant professor of pediatrics at Harvard Medical School, and his collaborators — including study co-first authors Felix Giani, Claudia Fiorini, and Aoi Wakabayashi of Dana-Farber/Boston Children’s — wanted to see if it was possible to use SH2B3 as a target to genetically increase the yield of laboratory-based red blood cell production processes (as opposed to tweaking cells in culture by adding cytokines and other factors).

Sankaran and his team recognized that their HSPC/RNAi approach would be very difficult to scale up to a level that could impact the clinical need for red blood cells. Thus, in a separate set of experiments, they used CRISPR gene editing to permanently shut off SH2B3 in human embryonic stem cell (hESC) lines, which can be renewed readily in a laboratory. They then treated the edited cells to encourage blood cell production. Under these conditions, the edited hESCs produced three times more red blood cells than controls. Again, the team could find no significant differences between red blood cells from the edited stem cells and controls.

Sankaran thinks that SH2B3s enforce some kind of upper limit on how much red blood cell precursors respond to calls for more cell production.

“This is a nice approach because it removes the brakes that normally keep cells restrained and limit how much red blood cell precursors respond to different laboratory conditions,” Sankaran explained.

He noted that in his vision, stem cells edited to keep SH2B3 turned off would be maintained in culture as a kind of cellular starter and used to produce red blood cells for treatment purposes; the edited stem cells themselves would never be used for direct treatment.

He also believes that with further development, the combination of CRISPR and hESCs could increase the yields and reduce the costs of producing red blood cells in the laboratory to the level where commercial-scale manufacture could be feasible.

“This is allowing us to get close to the cost of normal donor-derived blood units,” he said. “If we can get the costs down to about $2,000 per unit, that’s a reasonable cost.”