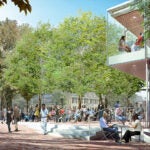 Smith project gets OK from Board of Zoning Appeal

Addressing what he called the “world’s current and future top thought leaders, researchers and entrepreneurs,” Nobel laureate Kailash Satyarthi urged Harvard students to take action in defense of abused and enslaved children around the world.

“Even a small act can dispel darkness in a room,” he told his audience at Harvard’s Memorial Church.

“You all represent so many bright sparks. Do not simply look … act,” said Satyarthi, who was honored on Friday by the Harvard Foundation as its 2015 Humanitarian of the Year.

“As the creator of the Global March Against Child Labor, [Satyarthi] ensured that both transnational awareness and organizational activism were at the center of the largest civil society movement in the world,” said College senior Irfan Mahmud in introducing Satyarthi. “As an advocate on the national level, he played a key role in the Right to Education law in India that made education not only a fundamental right for children up to 14 years of age, but also made it institutionally accessible and free.

“This is just the surface of his work. It is no wonder that the Nobel Institute found him worthy for their highest honor for world peace … And today, we are lucky enough to honor him as the Harvard Foundation’s 2015 Peter J. Gomes Humanitarian of the Year.”

For more than 25 years, Satyarthi has been a world-renowned activist for children’s rights, fighting against child slavery and exploitive child labor. He has waged a peaceful struggle to stop children being exploited as labor instead of attending school, and has contributed to the development of international conventions on the rights of children. He and his organization, Kailash Satyarthi Children’s Foundation, have rescued more than 84,000 children from exploitive conditions.

In 2014, he and Malala Yousafzai were jointly awarded the Nobel Peace Prize “for their struggle against the suppression of children and young people and for the right of all children to education.”

“Friends, do you realize that fear, not freedom, is the primary driving force for all creation in this world today?” said Satyarthi. “We obsess about money for the fear of being left out. We chase power, for fear of being labeled inconsequential. We attach ourselves to brands, heroes, and celebrities for fear of not fitting in. On the international stage we try to establish our power by making bombs, drawing borders, and sending missiles, for fear of our security and position.”

In offering a solution to combating this fear, Satyarthi urged the “globalization of compassion.” That is the key, he said. “Compassion for fellow man, regardless of ethnicity, race, religion, nationality, politics, or anything else.”

He called for “compassionate intelligence” in politics, business, and religion. “Most of all, we need to teach our bright, young, energetic, and idealistic youth the value of compassion so they don’t become disillusioned or turn to violence.” He urged his Harvard audience to “come together to not lose any more of our children to needless violence. Let us inculcate compassion, global citizenship, and universal brotherhood from the earliest ages.

“Harvard is a beacon of excellence, a repository of the best leadership in the world, representing the potential to change the world,” Satyarthi said. “The time to lead is now and this is the place. I am confident we can together make slavery, child labor and trafficking history. Let that be the legacy of our lives, our gift to the world. Freedom, freedom, freedom, for each and every one of us!” he concluded.

The award is given in memory of the Rev. Professor Peter J. Gomes, Plummer Professor and Minister in Harvard’s Memorial Church, who died in 2011.