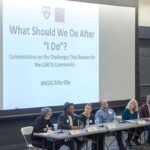 'A Return to Love' author to speak at Harvard Divinity School

For Marianne Williamson, politics is not only personal, it is spiritual. The best-selling author of such self-help books as “A Return to Love” and “The Healing of America” not only believes in this connection, she stresses that ignoring — or, worse, severing — it is leading us toward our own destruction.

“We are imperiling the future of life on Earth due to the absence of ethics,” said Williamson in a telephone interview. The California-based spiritual leader — and former Congressional candidate — will give a talk titled “On Consciousness, Spirituality, and Politics in America,” at Harvard Divinity School on Wednesday.

On the phone from Des Moines, Iowa, where the 63-year-old was speaking as a surrogate for Democratic presidential candidate Bernie Sanders, Williamson discussed the moral evolution of America, starting from its founding.

“The birth of American democracy was important not only in the political history of the world but in the moral evolution of the world,” she said. “The idea that we would develop a society in which conceivably anybody could spread their wings: that’s radical.”

It is, however, a fundamental idea that must be constantly renewed. Citing Benjamin Franklin’s quip that we have a republic “if [we] can keep it,” she talked about the need for each generation to embrace these ideals. The failure to do so, she says, is behind the concentration of power and wealth in the hands of a few. “Nations and civilization go through developmental stages,” she said, likening the current political and economic climate to a personal regression to childhood, or, in the case of America, “toward having an aristocracy.”

What is needed, Williamson stresses, is a reawakening of that original revolutionary spirit. This would not only be moral, Williamson said, it would be good politics. “Both Gandhi and Martin Luther King Jr. based their political philosophies on their moral convictions,” she said, discussing the principle of nonviolent resistance. “They demonstrated not only its moral veracity but its political effectiveness.”

Of course, these principles did not result in success for Williamson when she ran for California’s 33rd Congressional District to replace the retiring Rep. Henry Waxman in 2013. Looking back, Williamson admits she was a little naïve.

“I felt that it was legit for me to run for Congress because I felt my knowledge and understanding of the issues was such that I could hit the ground running from day one,” she said. “What I very much underestimated was the significance of the fact that I did not have extensive experience with actual political campaigns.

“Many people lose their first congressional race,” she pointed out. “Including Barack Obama.” While stating her lack of interest in a second run, she adds that the experience was useful. “It gave me tremendous compassion for those who run. It certainly didn’t diminish my interest in the issues.”

Those issues, she points out, bridge both political and spiritual concerns. “Child poverty is a moral issue,” she said. “Unwarranted invasion of other countries is a moral issue. Permanent war machinery is a moral issue. While politics matters a lot to me, it matters because it should be, as Lincoln said, touched by the better angels of our nature.”

Which is why, Williamson said, she augments her more personal self-help work with more outer-directed talks like the one she will give at Harvard this week. “There are enough of us who love, who aspire, who believe in the possibilities for America, for the human race and the planet, to become a critical mass,” she said. “But we’ve got to step it up.”

Marianne Williamson’s talk “On Consciousness, Spirituality, and Politics in America,” will be held at Harvard Divinity School on Wednesday from 7 to 9:30 p.m. in the Sperry Room, Andover Hall, 45 Francis Ave., Cambridge. This is a free public talk and a livestream will be available.