For gallery visitors, a chance to be one with the art 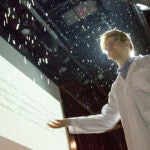 Behind the show, pages (and pages) of pain

What’s it like to walk into a living dream, one you can control with a wave of your hand? To find out, stop by Radcliffe’s redesigned Johnson-Kulukundis Family Gallery in Byerly Hall, where the interactive installation “teamLab at Radcliffe: What a Loving and Beautiful World” transforms the viewer into virtual artist.

Behind a black curtain, a vivid dreamscape springs to life as visitors pass their hands in front of projected Chinese and Japanese characters that cascade down the gallery’s walls and vanish into the floor.

As multiple visitors move through the space, the images they trigger interact with one another, creating a unique environment every few seconds. Each image has its own acoustic signature, so viewers are also virtual composers who generate an ever-changing world of sound.

The gallery has been transformed into something “entirely unpredictable” said Yukio Lippit, the Johnson-Kulukundis Family Faculty Director of the Arts at Radcliffe and a professor of the history of art and architecture, who was instrumental in bringing the show to Harvard.

Visitors, he said, will be surprised by “the degree to which they have agency in shaping this world, in interacting with it, in triggering its various mechanisms and effects to create something new.”

The brain behind the new design is teamLab, a Japan-based consortium of designers, engineers, architects, artists, mathematicians, computer scientists, and specialists in 3-D modeling who use technology to expand the boundaries of art and creativity. For the Radcliffe show, the group used characters by the Japanese calligrapher Sisyu that represent the natural world, and music by Hideaki Takahashi.

In Cambridge last week for the gallery opening, Toshiyuki Inoko, teamLab’s founder, discussed through an interpreter the genesis of the project, his vision for the work, and the importance of having its U.S. debut at Harvard.

Created in 2001 with five members, teamLab now numbers more than 400, all of whom share the belief, said Inoko, “that digital technology can expand the expressive boundaries of art.”

Inoko, an engineer by training, said art has been as important as science in the history and development of human perception. Taken together, the disciplines can help reconnect people to their physical surroundings and to one another, he said, adding that he worries that such connections are increasingly scarce in today’s hyper-connected digital world.

“In the pre-modern world, life was based in community,” said Inoko, “one understood that one’s actions were mutually interactive and consequential in profound ways. And so the interactivity of the installation is meant to evoke a kind of resonance with one another and the world, which has been lost.”

Bringing the installation to Radcliffe has been a good fit for teamLab, whose collaborative nature, Inoko said, resembles Radcliffe’s operating ethos, one that encourages interdisciplinary engagement among its fellows and visiting scholars.

“To fully explore the potential of this realm one has to work collaboratively. The digital realm is very complex, and the boundaries that separate what I am calling creativity and technology are actually thoroughly blurred.

“We come together to work out problems and think of solutions, using our combined expertise to solve problems,” he continued. “And that process is very important because it leads to the generation of knowledge and small intellectual discoveries that are then folded back into the process. … So being able to showcase our work in an interdisciplinary environment such as this one is highly meaningful.”

“I think this offers one kind of ideal model of collaboration.”

teamLab at Radcliffe | What a Loving and Beautiful World || Radcliffe Institute

TeamLab has created a multimedia installation that generates a colorful and multisensory experience that continuously evolves. Based in Japan, teamLab is a consortium of artists, engineers, and computer scientists specializing in unique “Ultra-technological” installations at the intersection of contemporary art, design, engineering, and computer science.

“teamLab at Radcliffe: What a Loving and Beautiful World” is on view and through Dec. 19.