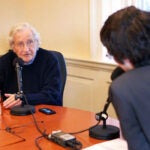 The state of the podcast

The incursion comes just days after Russian President Vladimir Putin caught many off-guard by announcing a new arrangement with Iraq, Iran, and Syria to share information in the fight against the Islamic State during the United Nations General Assembly.

Russia’s entry into the Syrian civil war adds an unwanted layer of complexity for the U.S.-led fight against the Islamic State and more broadly for American hegemony in the Middle East.

Retired Brigadier Gen. Kevin Ryan is the director of the Defense and Intelligence Project for the Belfer Center for Science and International Affairs at Harvard Kennedy School. A career military officer, Ryan served as senior regional director for Slavic states in the Secretary of Defense’s office, defense attaché to Russia, and as chief of staff for the Army’s Space and Missile Defense Command. Most recently, from 2003 to 2005, he oversaw the Army’s strategic war plans, policy, and international affairs.

The Gazette spoke with Ryan about Russia’s move into Syria, how the United States is likely to react, and how this development will affect U.S.-Russia relations.

GAZETTE: Why is Putin suddenly moving aggressively into this region, and why now?

RYAN: The immediate reason, I believe, that President Putin has deployed additional military assets into Syria is because he and his experts assessed that the Assad regime was about to fall and they want to avoid that. Now, why do they want to keep the Assad regime from falling? It’s because they see the Muslim extremist threat, and specifically they see that as a Sunni extremist threat, as dangerous to the security of Russia. All of the Muslim extremist threats that exist in Russia’s southern tier — the Caucasus and throughout Central Asia — are Sunni-based, not Shia. We know that Sunni Muslim extremists living in Russia have gone down to fight in Syria as part of a global jihad effort. The Russians are concerned that after Syria falls, these jihadists will return to Russia to restart the war there.

GAZETTE: Is that a valid concern?

RYAN: Yes, absolutely. The conflict between Muslim populations and the Russian Orthodox population is an historical one. It goes back over 100 years, for sure. And it flares up from time to time. This is the most recent flare-up.

GAZETTE: Russia maintains that these airstrikes are targeting Islamic State terrorists, yet Pentagon officials and others say the sites being bombed are areas associated with rival Syrian rebel groups who also oppose Bashar al-Assad, a regime Putin has supported militarily in the past.

RYAN: What appears to be going on is that the Russian military, with these first airstrikes, is attacking rebels who oppose the Assad regime or threaten the regime with collapse. I do not think that the Russians care whether they swear allegiance to ISIS or to al-Nusra or al-Qaida or whatever.

GAZETTE: Why publicly make the distinction then?

RYAN: Either they intend to do that and just made a mistake in their bombing yesterday, or they really don’t see a difference between ISIS and the rebel groups.

GAZETTE: Does anything suggest to you yet what kind of campaign Russia will pursue and for how long?

RYAN: Putin said today [Thursday] on TV to his people that Russia’s military operation there will consist of air support, air campaign only, and not ground troops. He has also said he’s there to support the government of Syria — the Assad regime — so that’s an open-ended commitment, I think, until such time as they can help find a political resolution to the fighting there. I don’t think that means that they’ll be there until Assad dies. I think they could see a future in which Assad steps down, but the regime remains.

GAZETTE: Doesn’t Russia’s presence greatly complicate U.S.-led efforts to push Assad out and defeat the Islamic State and other extremist groups in the region?

RYAN: I don’t think it could get any more problematic than it was before they showed up. I think it complicates things, but if the United States wants to work at this, we can probably find a way to leverage the Russian participation to our benefit. But if we can’t, if the Russians refuse to be helpful in this and go their own way, then I think we can work around it.

GAZETTE: How should the U.S. respond?

RYAN: I don’t know how the U.S. is going to respond in the long run because I’m not sure what the dimensions are of the Russian commitment. I think the U.S. has responded appropriately so far. We have agreed to “deconflict” military operations so that pilots won’t be crashing into each other, but it remains to be seen whether Russia is going to do what it says it wants to do — which is bomb ISIS rebels — or whether they’re going to indiscriminately bomb any opposition forces to the regime.

GAZETTE: What does it tell us that the U.S. appears to have been blindsided first by Putin’s remarks at the United Nations earlier this week about the “coalition” with Iran, Iraq, and Syria, and then these bombings? Is this a major intelligence failure?

I’ve read the reports and let’s assume that they’re accurate, that a Russian general officer visited the U.S. embassy an hour before the bombings began and gave us a heads-up. First of all, that’s not good enough coordination. But this is the first time and the U.S. and Russia only just days ago agreed to even discuss coordination, so I think we’ll hopefully improve on that going forward. That’s something to build on, let’s say. That’d be an optimistic way of describing it.

GAZETTE: Did the annexation of Crimea and the conflict in Ukraine — and the lack of pushback from the EU, the U.S., and others — embolden Putin to move into the Middle East?

RYAN: No, I don’t think so because I disagree with the premise. I don’t think there’s a lack of response from the United States and the EU. I think there was a very robust response to Crimea and Eastern Ukraine and there continues to be. There are sanctions and the U.S. and the EU are supporting Ukraine in a number of ways. We’ve beefed up presence in the Baltic region to prevent any similar kinds of things happening to NATO countries. So in that regard, I think our response has been pretty good.

Putin has been emboldened to move into Syria by a couple of other things. Number one is that through many years of continued investment and reform, his military is now qualitatively better than it was, say, a decade ago. So that emboldens Putin and his military leadership. And number two, as I said before, I think he was encouraged to act because he saw the impending fall of the Assad regime and he felt that if he did not take an action now, the whole regime would collapse.

As it turns out, they got to do some things in Kosovo, but in the end, it was too little, too late, and they didn’t really have any say in what happened in Kosovo. I don’t think they want to let that happen again with regard to Syria, so Putin decided to act more forcefully and sooner in Syria than they had done in Kosovo because they want to be able to shape the outcome.

GAZETTE: Is this the beginning of a proxy war between the U.S. and Russia?

RYAN: I don’t think so, in this case. It’s about Russia’s own security against Sunni Muslim extremists and it just happens to be happening in Syria. Because they had a commitment there, they have a base there in Tartus, and Putin has said this publicly and it’s true: that a lot of their extremists are fighting down there in that war. Some of them are on ISIS’ rolls and others are fighting with other groups.

GAZETTE: What does this action portend for U.S.-Russia relations? Are we entering a dangerous new phase?

RYAN: I think we entered a dangerous new phase in relations when Russia invaded and took over Crimea and began its operations in eastern Ukraine. Syria is an important issue; it’s a problem, but I don’t see that as more dangerous than what’s going on in Europe. I still believe that the situation in Europe is ultimately more dangerous to the United States than the situation in Syria — what’s already been done [in] Crimea, what’s happening [in] Ukraine, and what might happen [in the] Baltics. Altogether, it’s a very dangerous situation and both countries seem to have hard positions staked out in opposition to each other, so it does not appear that it will be easy to resolve these conflicts and these differences in Europe and the Middle East.