What ‘The Prize’ taught Newark, and its author 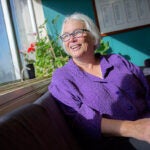 When Facebook’s Mark Zuckerberg appeared on Oprah Winfrey’s show in 2010 to announce his $100 million gift to the Newark, N.J., public schools, viewers — including the community the gift was meant to help — were both stunned and exhilarated. Could this act of generosity be the key to pull the school district, which had long been under state control, out of distress? Would New Jersey Gov. Chris Christie, Newark Mayor Cory Booker, and the city of Newark come together to enact true reform? These questions intrigued Dale Russakoff, a veteran journalist for The Washington Post, who had long been drawn to Newark and its story.

“It is a city with a tremendous amount of troubles and struggles, but it is such a metaphor for what has happened to urban America and why,” says Russakoff, who tells the story of the city’s school reform in her new book, “The Prize.”

“The where-do-you-go-from-here questions are everywhere in Newark,” she concludes

In this edition of the Harvard EdCast, Russakoff looks at the troubled education reform story in Newark and reflects on what can be learned from its failure to provide system-wide reform.

Interview with author of 'The Prize'

Dale Russakoff, author of “The Prize,” examines the troubled education reform story of Newark and reflects on what can be learned from its failure to provide systemwide reform.

As part of the Gutman Distinguished Author Series at the Harvard Graduate School of Education, Dale Russakoff discussed “The Prize” on Monday.