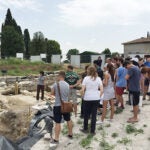 As Congress begins to debate an international agreement to limit Iran’s nuclear ambitions for the next 15 years, analysts at Harvard Kennedy School (HKS) say many questions remain that will determine the ultimate success or failure of this deeply controversial deal.

Is the agreement strong enough to truly constrain Iran, and does it prevent or promote the spread of nuclear arms in the Middle East? How should and will the United States and coalition partners respond if Iran cheats? Is the partisan divide over the deal damaging to this country and to the deal’s credibility?

David E. Sanger, chief Washington correspondent for The New York Times and a senior fellow at the Belfer Center for Science and International Affairs, put those queries and more to panelists Tuesday night on the crest of next week’s Congressional vote.

Critical of the deal, William Tobey, a former deputy administrator for defense nuclear nonproliferation at the National Nuclear Security Administration and now also a senior fellow at the Belfer Center, cautioned that recent statements by top Iranian ministers and advisers denying that inspectors will be permitted to access so-called military sites are signs the deal “may already be eroding.”

Tobey also noted that most of the meaningful restrictions on Iran fall away in just 10 to 15 years, and that the International Atomic Energy Agency (IAEA) still hasn’t gotten an explanation for a dozen possible weapons activities in which Iran has engaged.

Even supporters acknowledge the deal has some weaknesses.

“The big risk is that in year 15, most of these restrictions on the Iranian program begin to lapse, so the Iranians could reconstitute a civil nuclear program, and they could possibly use that as a cover to develop a covert nuclear weapons program. We have to mitigate against that risk,” said R. Nicholas Burns, the Roy and Barbara Goodman Family Professor of the Practice of Diplomacy and International Relations and director of the Future of Diplomacy Project at HKS.

In implementing the deal, he said the United States must take a hardline stance should Iran cheat on its end of the bargain.

“I think President Obama should be more clear than he has been about his determination that he will use military force if there’s a fundamental Iranian violation of this agreement,” said Burns, who testified before Congress four times this summer as a cautious proponent of the deal.

Matthew Bunn, professor of practice and co-principal investigator of the Project on Managing the Atom at HKS, said the deal does a “pretty good job” over 10 to 15 years in reducing Iran’s stockpiles of enriched uranium and an “even better” job on its plutonium cache and covert sites. But “over the longer term, it’s weaker, there’s no doubt about it,” than it might have been.

“Overall, the chance that we’re going to have some unstable nuclear arms race in the Middle East goes down, in my judgment, as a result of this deal,” said Bunn.

Troubling are two compromises struck very late in the negotiations process in Vienna, the lifting of a United Nations ban on conventional arms transfers to Iran in five years, and a ban on ballistic missiles, which ends in eight years, Burns said.

“I regret that those compromises had to be made,” said Burns, a former ambassador. As soon as those bans expire, the United States should push hard to reimpose them because, he said, “We cannot trust the Iranians with more powerful weaponry, given their track record.”

Panelists agreed that Iran is more likely to try to cheat at the margins, rather than do something bold. It’s a strategy that would make it harder for the United States to rally China, Russia, France, Britain, and Germany to take swift punitive action, given their trade interests with Iran.

“In some ways, the strongest reason that Iran has not to cheat is that the agreement is so advantageous to it. It gets international blessing for its program and gets to get right up to the brink of a nuclear weapon in 10 to 15 years,” Tobey countered.

Despite near-complete opposition by Republicans in both houses of Congress, Obama now appears to have more than 40 Democratic supporters of the deal, enough to prevent a veto override, assuring the deal will survive.

But the prospect of an agreement with Iran has only further stoked the deeply political divisions in Washington.

Former Secretary of State Hillary Clinton, now running for president, said Wednesday that while she supported the deal, its success will depend on the United States having a broader strategic framework with Iran. “‘Distrust and verify’ would be her approach,” Sanger co-wrote in The Times.

On Tuesday, former Vice President Dick Cheney called the deal “shameful” and said it will almost surely lead to a nuclear attack by Iran. “It is madness,” Cheney told supporters.

“I thought he overplayed his hand by saying that if this deal is rejected, we’ll have war,” said Burns. “I don’t think so at all.”

The panelists concurred that passing the deal without bipartisan support is harmful to the deal’s credibility and damaging to U.S. democracy.

Without a majority vote, Tobey said the deal is less legitimate and weakens its enforceability. “Of course, it’s bad for the deal and bad for the country if the deal is essentially the product of a vote of disapproval in both houses of Congress.”

“I’ve been disappointed, maybe not shocked, but disappointed by the partisan nature of this debate,” Burns said. “I think we as citizens in the United States had a right to expect that an issue of this gravity … that members would vote their heads and they’d vote their consciences, [and that] they wouldn’t just vote along strict party lines.”

“It seems to me,” Bunn said, that “we need to have in the United States an ability to talk about difficult national security issues in a rational way. And that’s not the kind of debate that we’re having about this deal in the last few weeks.”