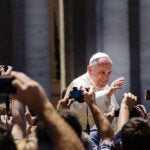 Immigrants today are integrating into U.S. society as fast or faster than those of previous generations, according to a study released Monday, with male immigrants holding down jobs at higher rates and committing fewer crimes than native-born Americans.

The study, by an expert committee led by Harvard sociologist Mary Waters for the National Academies of Sciences, Engineering, and Medicine, provides a counterpoint to some claims in the national debate on immigration. It illuminates how immigrants fare after arriving in the United States, which is important, Waters said, given that one in four Americans today is either an immigrant or a child of one.

In light of the country’s policy debate on immigrants, “whether or not they’re succeeding … is an important question for the future of our society,” said Waters, the M.E. Zukerman Professor of Sociology.

The two-year analysis by a committee of sociologists, economists, political scientists, geographers, and other experts reviewed existing studies on life for immigrants in the United States. In some areas of focus, Waters said, studies were scarce, so committee members turned to data from the U.S. Census Bureau and other sources.

The report looked at a number of different measures — including education, occupation, residential segregation, language acquisition, poverty, health, crime rates, family type, intermarriage, and naturalization — to determine whether today’s immigrants are as successful at integrating as prior waves. The answer is yes, Waters said, though she added that assimilation takes time.

“Integration is a multigenerational process.”

Among its recommendations, the report suggested further study of America’s naturalization process. Only half of eligible immigrants become naturalized Americans, a far lower rate than in certain other nations, such as Canada and Australia.

Overall, immigrants are more likely to be poor, 18.4 percent compared with 13.8 percent for native-born Americans. This is the case even though a greater proportion of immigrants work. The poverty rate declines over time, approximating that of the native-born in the second generation, and then falling to 11.5 percent in the third generation.

Young immigrant men with low levels of education commit fewer crimes than their native-born counterparts, the report said, and foreign-born men ages 18 to 39 are jailed at one-fourth the rate of native-born men. The impact of this is felt in cities where concentrations of new immigrants align with lower crime rates, Waters said.

“Integration is a neutral thing. They become like native-born Americans, better off or worse off,” Waters said.

Illegal immigration was part of the study, though Waters said the committee didn’t take a position on the issue. One in four immigrants are undocumented, she said, but they are nonetheless undergoing integration — working, buying homes, and starting families. The study indicated that having undocumented parents has a negative effect on children, who tend to have less schooling, slower cognitive development, and, as teenagers, higher rates of depression and anxiety.

One of the study’s most striking insights, Waters said, was just how powerful the assimilation process is in the United States. It works not just on immigrants, but on the rest of the population as well. One in seven marriages is across racial or ethnic lines, statistics show. According to one survey, 35 percent of Americans have close relatives of a different racial or ethnic group.

Meanwhile, as has long been the case, the country as a whole, in its customs and culture, changes under the influence of immigration.

“It’s really impressive how strong the force of integration is in America,” Waters said.