Images to act on 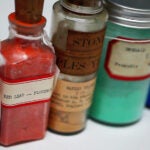 The power of the visual to change hearts and minds is undeniable. While activists had been campaigning for civil rights long before protesters marched in Birmingham, Ala., in 1963, it was the images of those protesters set upon with dogs and fire hoses that intensified public opinion and ultimately helped bring about the passage of the Civil Rights Act of 1964. But the visual impact of that struggle went far beyond the reportage of the day, combining with other burgeoning movements, from pop art to feminism, to create a distinctive moment.

Kellie Jones, an associate professor in art history and archaeology at the Institute for Research in African American Studies at Columbia University, discussed this creative flowering at the Barker Center on Wednesday, in a W.E.B. Du Bois colloquium titled “Civil/Rights/Act: Art and Activism in the 1960s.”

The decade’s innovative uses of the color black took off from the suprematist movement of modern artists like Kazimir Malevich to “directly address ideas of citizenship,” said Jones, who drew her examples largely from “Witness: Art and Civil Rights in the Sixties,” a show she co-curated last year with Teresa A. Carbone, the Brooklyn Museum’s Andrew W. Mellon Curator of American Art. 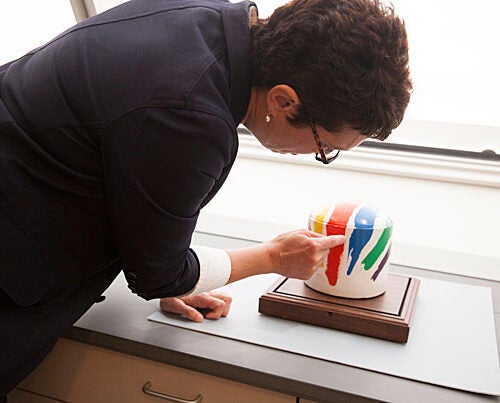 Citing the members of Spiral, a New York artists group that came together in the mid-’60s to discuss how to engage arts with civil rights, Jones noted abstract works such as Leon Polk Smith’s “Black Anthem” (1960) and Charles Alston’s “Black and White #7” (1961). Despite their lack of figurative content, in the context of the times such creations had obvious political meaning, Jones said.

Other pieces from the era were more directly political. “Awaken from the Unknowing” (1961) by Charles White is such a drawing, featuring an African-American woman apparently absorbed in a spread-out newspaper. Noting the “lush attention to the figure of the black woman,” Jones also cited the educational message of the piece. In fact, she said, the activist Student Nonviolent Coordinating Committee used a version of the image on the cover of an announcement about its Freedom School.

This activist art drew from parallel movements of the era. Barkley Hendricks’ “Icon for My Man Superman (Superman never saved any black people — Bobby Seale)” (1969) relies in part on pop-art colors and style for its power.

At times, the means of creation were a political act. Along with the rise of alternative gallery spaces as a path to “democratizing” art, Jones discussed fiber and soft-sculpture artists, such as Jae Jarrell, whose “Urban Wall Suit” (1969) combined the traditionally female medium of clothing with the populist art of the mural for a striking — and wearable — piece. Print-making also touched on such issues for artists involved in the fight for civil rights. In particular, posters, which could be mass produced and distributed, were the “quintessential activist form” of art, said Jones. Cheap and accessible, posters allowed the public to choose art as “a symbol of personal protest and aesthetic choice.”

Even as conflict arose over the social worth of abstract art, the movement grew and expanded. Citing examples beyond the visual — such as musical compositions that could “channel the ethos of protest” — Jones brought the discussion around to the current Harvard Art Museums exhibit of work by Corita Kent, whose vibrant, politically aware projects continue to resonate today.