Housing that reflects the world 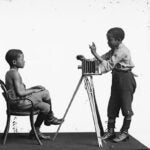 Life behind the pose

It might be time to think a little deeper when looking around your home.

The floor you are standing on is more than simply a place to put your feet. The ceiling above does more than just provide warmth and protection from the outside elements. These structures provide a clue into how communities work, how culture changes, and how discourse and policy are shaped.

These are crucial tenets behind Harvard’s Graduate School of Design (GSD) teachings on housing, and now the results of those lessons are on display for the community to see.

Initiated by GSD Dean and Alexander and Victoria Wiley Professor of Design Mohsen Mostafavi and produced by a curatorial research team of the School’s faculty, staff, and students, “Living Anatomy: An Exhibition About Housing,” a multimedia show in the lobby of Gund Hall, just opened and will be on display until Dec. 20.

The exhibit — filled with interactive models, renderings, and texts — covers the walls of the lobby. The goal is to help answer questions about how housing has become a fundamental agent of change around the world in the last 50 years. The hope is that the discussion about design and building, both for the public and for those who work and study at GSD, will grow from a stroll through the space.

“We aim to show how housing has had such a large impact globally and how the School has had an active hand in the discussions and work around it,” said Travis Dagenais, communications specialist for the Graduate School of Design.

The display was part of a four-month effort to bring together a collection of work relevant to topics studied at GSD. The team chose to look at work from 1965 to now, a period that witnessed the waning of modernism. Instead of looking at one aspect of housing, the team dug into six areas.

“We really had the whole world within a 50-year period to play with,” said Matthew Gin, a Ph.D. and member of the curatorial research team. “There really was the idea of putting together something that could speak to the different voices and the different tones and inflexions of this conversation that we are having. That meant really casting a broad net and bringing in a whole range of different projects.”

Walk through the Gund Hall doors into the lobby with Loeb Library on your left, and immediately you are hit by a large mural of a French project (Mulhouse Social Housing: Lacaton & Vassal, Paris, 2005) that depicts a living space in what looks like an old greenhouse. The idea was to introduce visitors to the space with an eye-catching piece and get them looking at the first section of work called “Inviting,” in which housing promotes social engagement, strength, and purpose. The other sections cover “Recovery,” “Territory,” “Exposure,” “Transience,” and “Discourse.”

The walls are covered with large artworks and renderings of projects by GSD faculty, students, and alumni. The displays themselves were crafted with the same respect as the work depicted, according to Megan Panzano, M.Arch. ’10, lead exhibition designer and design critic in architecture at the GSD.

“We really thought of the lobby as a kind of canvas of space that we could utilize for an array of dissection of residential space,” she said. “The scale of the spaces that [we] ended up producing makes it feel domestic. They are also meant to re-create a feeling of being in a home.”

Literature and other readings from the School are placed on tables, giving visitors a chance to dive a little deeper into the findings.