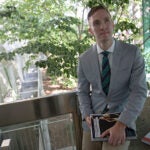 Doctors in a hard place

Departing House speaker likely to be replaced by deputy who can work with conservatives, analyst says

The surprise announcement by U.S. House Speaker John Boehner (R-Ohio) that he will step down at the end of October was met with cheers from some conservatives in his own party. Friday’s news set off a scramble to fill the third-most-powerful job in Washington and to control the House Republican caucus just as Congress heads toward another budget battle.

Despite presiding over the largest party majority in the House since 1930, Boehner spent much of his nearly five-year tenure weathering relentless criticism and fending off periodic revolts by the GOP’s conservative wing. During a news conference, Boehner said he intended to leave to avoid “prolonged leadership turmoil” in the face of what analysts predicted would be a hotly contested challenge to his speakership.

Boehner’s detractors assailed his participation in legislative deal making and his failure to advance the conservative agenda, one often marked by political scorched-earth tactics. In part, House conservatives rebelled against Boehner because he did not push their efforts at a government shutdown in 2013 and tried to cobble a “grand bargain” with President Barack Obama to extract entitlement reforms in exchange for a modest tax hike. They saw his willingness to avoid sending the country over a “fiscal cliff” as proof of ideological weakness and party disloyalty.

Douglas Heye has held top communications posts in both the House and the Senate and for the Republican National Committee. Most recently, he served as deputy chief of staff for communications for Eric Cantor when he was House majority leader. Now a fall 2015 fellow at the Harvard Kennedy School’s Institute of Politics, Heye spoke with the Gazette about Boehner’s tenure, his departure, who is likely to replace him, and what his departure means for the Republican Party in the months ahead.

GAZETTE: Why did Boehner step down? Was he pushed out?

HEYE: It was clear that there was going to be a move against him, in addition to all these other things that were going on. And this comes after he had said he was planning to leave at the end of last year. He’d already stuck around longer than he planned to. And I think he’s definitely right that if there had been a vote for him, whether he survived it or not, it’s the kind of turmoil that the [Republican] conference just does not need. And so, I think it was a smart move by him. It was also a pretty selfless move. He could have won this. I don’t think anybody really questions that. But at what price for him, at what price for the conference, and obviously, the House as a whole? The speaker’s responsibility is to the entire House, so it’s a different set of responsibilities than majority leader, majority whip, minority leader, whatever it may be.

GAZETTE: Is the current party rancor a leadership failure, or is the House GOP unmanageable right now?

HEYE: Leadership was surprised at the difficulty of getting some things done that shouldn’t have been difficult to get done — pulling votes that shouldn’t have been pulled. For me, it all goes back to late December of 2012, when we put forth what we called “Plan B” when the Bush tax cuts were expiring. We put out a plan that would basically freeze rates for anybody making a million dollars or less — so 99-point-something of all Americans, with the full knowledge, because it was codified into law, that taxes were going to go up at 12:01 a.m. on January 1 [2013]. That plan lasted less than a day before it was rejected. In some cases, there were members who said, “Well, I can vote for this January 1, because that’s a vote to cut taxes.” And so, taxes are higher today because some people defined the vote as voting to increase taxes.

It’s kind of paradoxical. I know from Democrats whom I talked to at the time that if we had been able to pass that, it would have sent a pretty big shockwave through Senate Democrats, through the White House, and had the kind of political effect of throwing sand in their eyes. Instead, the White House and Senate and House Democrats, for that matter, sat back and looked at us having difficulty doing things that should have been pretty easy. I don’t think much of this is personal, but certainly different members are going to have different priorities, and what they want to do, and how they want to do it.

GAZETTE: Who is behind this intraparty conflict? Is it Sen. Ted Cruz, as Boehner suggested on “Face the Nation” earlier this week?

HEYE: It’s tough to say. I think we live in a world where everything is nationalized. Congressional elections are more national. All politics are not local anymore, we’ve learned. I don’t think that any Senate Republicans are really pulling strings on every machination of everything that’s going on.

GAZETTE: How has this small group of hard-liners, the “Freedom Caucus,” been so effective?

HEYE: If Republicans aren’t going to get any Democratic votes on whatever your bill may be, then they can only afford to lose a certain number of Republicans. So if you lose 30 Republicans on a vote, you’ve got a real serious issue. And that could be an appropriations bill; that could be the Farm Bill; it could be a whole host of things that make it very, very tough to get to 218 votes.

GAZETTE: Who are the likely candidates to replace Boehner? Majority Leader Kevin McCarthy appears to be the favorite, but talk is that others like Rep. Daniel Webster (R-Fla.) and Steve Scalise (R-La.) may make a move.

HEYE: It’s McCarthy. Scalise will run for majority leader. Webster is going to run. He did last time; he got 12 votes. Kevin’s going to be the next speaker.

GAZETTE: McCarthy has only been in Congress since 2006, never chaired a committee, and doesn’t have much of a legislative track record. What policy priorities is he likely to advance?

HEYE: I’ve known Kevin since 1996. I can’t tell you legislative priorities, because I haven’t talked to his office about that. But he’s somebody who works with members extremely well. One of the benefits that he has is in 2009 he was in charge of recruiting candidates to run. And more than half of the Republican conference has been elected from 2010 to now.

GAZETTE: Is that the source of his power?

HEYE: You’ve got a lot of members whom he has good relationships with, that he’s worked with before they even got to Congress. Another thing that he does pretty smartly is … members raise money or leadership will raise money for people in swing districts, seats that we have to save, and so forth. But he’ll do that with any member who asks for help. Take somebody like Trey Gowdy of South Carolina. When he emerged from his primary, Kevin did an event for him. Everybody knew whoever wins that primary is going to be the member of Congress. That’s just one example. Obviously, everyone in the conference knows him. But for a whole lot of them, he’s someone who’s been there not only from day one, but before day one. I think that will really help him.

GAZETTE: Can McCarthy unify the party, or might he eventually end up in the crosshairs if he’s not able to deliver on things that Boehner said are “never going to happen?”

HEYE: You used the word “unify.” That’s what he’s running as, as somebody who can bring the party together. He’s conservative; he’s well-liked by conservative members. A lot of them, he’s campaigned for either in recruiting them to run and then campaigning for them or their re-elections — doing fundraisers. So I’m hopeful he’ll be able to do a really good job.

GAZETTE: What will be his first test as speaker?

HEYE: I don’t know yet. It’s all too new. There are a lot of people who are going on TV right now who are trying to tell everyone: “Here’s exactly what’s going to happen.” Most of those people I never saw in the Capitol. So I would take specific predictions with a grain of salt.

GAZETTE: How will a leadership change affect the party in the coming months?

HEYE: It’s tough to say. I saw an article about how this is devastating for Jeb Bush’s [presidential] campaign. I don’t think there’s a single caucus-goer or primary voter who, four months from now, is going to say, “You know, I can’t vote for Bush because of Boehner.” I don’t even know what the real link is on that. I think it’s hard to extrapolate specifics from it, especially given that we’re more than four months away from the first votes being cast. Like any other thing, ultimately whatever candidate does the best job of putting together the campaign they need to convince voters to vote for them will win. It’s easy to talk about “establishment versus this or that.” The reality is our primaries and caucuses are decided by people throughout the country, one state at a time, in every city. It’s not that a precinct boss wins a precinct, like used to happen in, say, New Jersey in the old days. So I think it’s really too soon to tell.

GAZETTE: Does a McCarthy speakership mean the Freedom Caucus now has control of the House because their guy is in charge?

HEYE: Kevin’s election doesn’t give any particular group particular power. What he’s calling members on is that he wants to bring all sides to the table, get everybody working together. So one day he’s meeting with a conservative group, the next day he’s meeting with what’s called the Tuesday Group, which is more-moderate members of the conference. I don’t think he’s looking at it from that perspective at all.

GAZETTE: Will Boehner’s departure — and the victory it represents for the hard-liners who long wanted him out — embolden some to move the party even further right?

HEYE: I don’t concede that point. We’ve been told for eight years now that Ronald Reagan couldn’t win a Republican primary [now]. We just nominated Mitt Romney, and before that we nominated John McCain. So I keep hearing that we’re getting more and more right. I don’t know that that’s necessarily true. And certainly how he would run the House is trying to be as inclusive to as many people as possible. That’s what he’s telling members as he’s calling them — and he’s calling all of them.