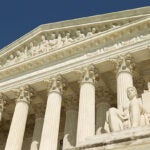 ‘One for the ages’

After 20 months of fitful negotiations, a coalition of world powers led by the United States announced Tuesday that it had reached a deal with Iran to limit that country’s capacity to a build nuclear bomb for at least a decade. In exchange, the international community will lift harsh sanctions that have had dire effects on Iran’s economy.

The agreement calls for Iran to reduce its supply of nuclear materials, places strict limits on all activities and research by Iran’s nuclear program, and gives inspectors from the International Atomic Energy Agency permanent, unfettered access to sites of known or suspected nuclear facilities and supply chains in Iran. Any violations could see sanctions “snapped back” into place within 65 days.

President Barack Obama called the deal the best available opportunity to prevent Iran from developing a nuclear weapon and possibly spurring a nuclear arms race in the Middle East. Critics say the deal clears the way for Iran to become an accepted nuclear superpower in 10 years and places Israel at greater risk.

Matthew Bunn is a professor of practice at Harvard Kennedy School (HKS) and co-principal investigator for the Project on Managing the Atom research and policy program at the Belfer Center for Science and International Affairs. He spoke with the Gazette about the accord.

GAZETTE: What’s your overall assessment of this agreement?

BUNN: I think it’s inevitably a compromise, but I think it’s a good deal. It’s a far better deal than I originally expected we’d be able to get with Iran. It cuts off the plutonium pathway entirely — that is, the plutonium pathway to a bomb. It greatly reduces Iran’s ability to move forward on the uranium enrichment pathway to the bomb. It cuts Iran’s installed centrifuge fleet by two-thirds. It eliminates 95 percent of the enriched uranium that Iran has built up, which is important because when you’ve enriched to just a few percent, you’ve done two-thirds of the work of going all the way to 90 percent enrichment for a bomb. So it eliminates material that would otherwise give Iran a two-thirds head start on making nuclear bomb material. And it greatly expands inspections.

Now it is a compromise, and there will be many people saying, “Oh, we should have gotten more.” But we have to look at the realistic alternatives. If we reject this deal and try to move back toward sanctions, the rest of the international community won’t be with us. They’ll say, “You had a perfectly reasonable deal, and it’s your fault, not Iran’s fault, that you’re not going with that.” And Iran will return to building up more centrifuges, and we’ll have less international support for sanctions to try to stop them, and Iran will drift closer to a nuclear weapons capability, and we will drift closer to a fateful decision as to whether to acquiesce or to use military force to try to set their program back.

Another option would be going straight to military strikes. But there are huge risks to U.S. and world security in that, and the consensus is that they would only set Iran’s program back by perhaps two to five years and probably convert it from a program that gives them an option to pursue a bomb to a program that goes straight to a nuclear bomb. So in the net, this agreement is much better for U.S. national security — and for world security, including Israeli security — than the available alternatives are.

GAZETTE: How much of what the U.S. and its partners were hoping to achieve did they get, and what did they compromise on?

GAZETTE: What do you make of the argument that Iran will not apply all of the capital (now freed up as a result of the sanctions being lifted) to its civilian infrastructure problems, but instead divert a portion to bolster its support for terror groups and activities in the region in order to placate the Revolutionary Guard generals? Is that a real threat and, if so, how does the coalition guard against that?

BUNN: I think Iran will make its own sovereign decisions as to how it wants to spend its money, just as it has been doing today. And it will have somewhat more money. The reality is Iran does things in the region that the United States objects to. Some of the things Iran is doing in the region are actually in line with what the United States wants. Iran is providing some of the main forces on the ground fighting the Islamic State, among other things. But there are many other things Iran does in the region — supporting Hezbollah, supporting the Bashar al-Assad regime in Syria, supporting Hamas and other groups attacking Israel — that pose real threats. But Iran has been doing that already, even under the intense sanctions that it’s under.

The United States has many options to strengthen the security of Israel and of the Gulf states, and the Obama administration has been moving forward on that already. The administration has made clear, and in fact [Israeli Prime Minister] Bibi Netanyahu has made clear, that the United States has done more to strengthen Israel’s security in a variety of ways under the Obama administration than has ever been the case before. So, it is a cost of this agreement, lifting sanctions, there’s no doubt about it. But the sanctions were imposed in order to get a diplomatic resolution to Iran’s nuclear program, and we need to be willing to take yes for an answer.

GAZETTE: Unlike the framework that was announced last spring, do the U.S. and Iran see this deal in the same way?

BUNN: At that time, it wasn’t the same document. Not everything was written down at the time in April when they issued conflicting press accounts. One of the things about this deal is that it is remarkably detailed. And I think that’s partly because of these past disagreements. They wanted to get as many things written down as possible. So those who are not technical experts will find it quite difficult to wade through the document.

I think that many aspects of the document are reasonably clear. It does establish a joint commission, which has a very interesting procedure for dealing with compliance disputes. In particular, there’s a clever approach for what’s referred to as “snap back” sanctions, whereby if there’s a dispute, the United States would be able to veto lifting the sanctions, but China and Russia would not be able to veto re-imposing the sanctions if there was a violation. That’s an interesting — and in a way more positive than I had expected would be possible — aspect of the agreement. But the reality is the United States and Iran, those two governments, deeply distrust and dislike each other. And that hostility will continue. Iran will continue to pursue what we consider outrageous behavior in the Middle East, and that will continue to be part of the international landscape. This is not by any means “peace in our time” or anything like that. This is a negotiated truce over Iran’s nuclear program, with all of the other issues between the United States and Iran still festering and still creating difficulty. But it does create an opportunity to work on those other issues.

Another key thing about the agreement, and I think one of the legitimate criticisms of it, is that while the verification arrangements and the plutonium restraints last indefinitely, the enrichment restraints end after 15 years. So 15 years from now, we’ll be in a situation where Iran can build up its enrichment capacity again, and we won’t have any bounds for complaint because that’s part of the agreement, and there won’t be any sanctions in place to deal with that scenario.

GAZETTE: Is that one of the aspects that has the potential to create problems going forward in terms of enforcement or global politics?

BUNN: Yes. I think in essence what we’ve done is we’ve bought time with this agreement. The key question now is, what are we going to do with that time? If we have exactly the same Iran and exactly the same relationship in 15 years, that will be a problem, I think.

GAZETTE: Are there other signs the U.S. will be looking for beyond the IAEA inspections to feel assured that Iran is fully complying?

BUNN: A very large fraction of verifying that they’re complying will rely on U.S. intelligence agencies. But the restraints that are agreed to will help a lot in making sure that Iran not only is complying at its known, declared facilities, but also not building covert facilities. So there are inspections of the places where Iran manufactures centrifuges. There are constraints on Iran’s ability to purchase anything for centrifuges outside of a declared, monitored channel. This shipping out of almost all of the enriched uranium would mean that a covert site would either also have to have a covert source of enriched uranium, or it would have to be three times as big or take three times as long as it would have if it had a source of enriched uranium already available to start with, rather than having to start from natural uranium. So there are a variety of things in the restraints, as well as in the inspections, that will help both the IAEA and the intelligence agencies confirm that there isn’t a covert site. I personally think it was always very unlikely that Iran would try to race to the bomb at a known, inspected site. The real deal is what happens at covert facilities.

GAZETTE: How will presumably improved relations between Iran and the U.S. affect other nations and actors in the Middle East?

BUNN: I think there will be ripple effects, but I think that in the cooler light of some weeks from now, people will realize that in fact the risk of an Iranian nuclear bomb is lower as a result of this agreement, not higher. There will be efforts by Saudi Arabia and others to try to build up some nuclear capability of their own to balance the nuclear capability that Iran is left with under this agreement. They have actually very limited capability to do that just technologically. So I think that this agreement in the net helps to prevent rather than to encourage a nuclear competition in the Middle East. But there will be an effort to build up civil nuclear programs in a number of countries. And of course, Israel has already made clear its strong objections to the agreement, but that’s been true for quite some time. I think Israeli objections are misguided and that, in the net, this is much better for Israel, as well, than the available alternatives. But they would have preferred an agreement in which Iran capitulated completely. I simply don’t think that was ever in the cards.