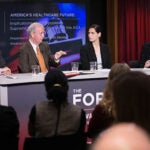 Another turning point for Obamacare

Last June, in the early days of the Ebola outbreak in Western Africa, a team of researchers sequenced the genome of the deadly virus at unprecedented scale and speed. Their findings revealed a number of critical facts as the outbreak was unfolding, including that the virus was being transmitted only by person-to-person contact and that it was mutating through its many transmissions.

While public health officials are confident that the worst of the epidemic is past, it is not yet over, and questions raised by the previous work still await answers to what it was that happened — and could happen again.

To provide some answers, a global team from Harvard University, the Broad Institute, the U.S. Centers for Disease Control and Prevention (CDC), the National Institute of Allergy and Infectious Diseases (part of the National Institutes of Health), and many other institutions sequenced more than 200 additional genomes from Ebola virus samples to capture the fullest picture yet of how the virus is transmitted and how it changed over the long outbreak. In an effort to enhance the global response to the disease, the team made their data publicly available as it was produced throughout last year.

“One of the most rewarding aspects of working in this outbreak response is the connections we have made with so many extraordinary individuals through open data sharing,” said senior author Pardis Sabeti. The global team that assembled as a result has now described its analysis in a June 18 paper published in the journal Cell.

“Our early work tracked the virus’s movements over just three weeks as the outbreak emerged in Sierra Leone,” said Sabeti. “Now, with a view of the virus over seven months, we can understand how it has been moving and changing over the long term.”

“One insight we gained from this high-resolution sequence data is that later in the outbreak, there was very little cross-border exchange of the virus,” said lead author Daniel Park of the Broad Institute. “That’s important, because the three main affected countries — Sierra Leone, Liberia, and Guinea — are often described as having ‘porous borders,’ which allowed people to travel back and forth.”

While cross-border contact helped fuel the early days of the outbreak, Park said it’s now clear that, once on the move, the virus didn’t migrate in the ways many analysts had predicted. “This is very reassuring to know that measures to contain the outbreak at borders can work,” he said. “[It] allows attention to be focused on within-country movement.”

The new sequencing also provides insight into viral evolution over the sustained outbreak. Early in the epidemic, as the virus spread rapidly, it accumulated many mutations, a disproportionate share of which could affect protein function. Last August, the researchers noted that most of these were likely to be damaging to the virus, but that the outbreak hadn’t gone on long enough for natural selection to weed them out.

The team observed that many of the mutations did not persist very long, and that the rate of change in the viral genome became more in line with what was expected over the longer term. “Ebola has never been exposed to humans for so long. And through so many transmissions, it has begun to weed out mutations that do not benefit it,” Park said.

The team also identified other changes to the virus that are expected long-term. For example, in some patients, the team saw evidence of human enzymes editing the viral genome. This had never been seen for Ebola, and previously had been seen only with viruses that had longstanding interactions with humans.

“The many mutations we saw early in the outbreak and the evolution we saw over the long term have been observed for other viruses before, and the genomic data only helps illuminate known evolutionary phenomena.” Sabeti said. “The data just remind us what we have always known, that we must get this viral lineage to zero.”