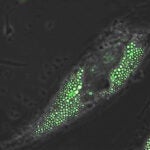 Biologist collaborates across disciplines to yield insights on structure, color

What does an engineer think about bird eggs? How about a computer scientist? Biologist Mary Caswell Stoddard wants to know.

Stoddard, a junior fellow in Harvard’s Society of Fellows, is enlisting the expertise of those in other fields to expand her understanding of a structure that grows more remarkable the deeper she looks.

Anyone who’s cracked one into a frying pan may wonder what secrets an egg could possibly hold, but Stoddard’s interest ranges widely, from composition to structure to appearance.

“An egg is a remarkable package, unbreakable in some ways, until the right moment comes along,” Stoddard said. “Harvard has been an exceptionally dynamic place for me. I’ve been able to take advantage of the brain power here on Oxford Street.”

James Weaver, a senior research scientist at the Wyss Institute for Biologically Inspired Engineering, has worked with Stoddard for the past two years examining the fine structural details of eggs: how their porosity and even pigmentation affect how they work.

“We’re very interested in understanding how the architecture of eggs affects their mechanical properties,” he said.

Researchers are interested not just in how structural details affect egg performance, Weaver said, but also in how these properties differ between birds with different nesting habits. A precise understanding of egg structure-function relationships could eventually yield applications for manmade materials, such as ceramics that break in predictable ways.

Stoddard works out of the lab of Scott Edwards, a professor of organismic and evolutionary biology and curator of ornithology at the Museum of Comparative Zoology.

“The most interesting thing to know about Cassie’s science is that it’s incredibly integrative in the true sense of the word,” Edwards said. “Although her interests are firmly in biology, she employs tools from engineering, chemistry, even genomics to get at the tough questions she is asking. She has broadened the study of avian diversity and behavior, specifically with her focus on eggs while at Harvard, to employ many diverse technical tools and software that have never before been used to ask questions in these areas. Her work is truly innovative because she is able to see connections between fields and tools that many biologists have not yet seen.”

Stoddard has also collaborated with applied physicists at Harvard’s School of Engineering and Applied Sciences and with computer scientists at Harvard and abroad. One project investigated how birds might perceive the color patterns of their own eggs.

Stoddard’s love of birds may be inherited. While growing up in Virginia, she was introduced to birding by her mother and grandmother, who share a passion for birds and wildlife. As an undergrad at Yale University, she was dazzled first by studies on bird color and plumage, and in particular by birds’ ability to see in ultraviolet wavelengths.

Ultraviolet vision means that birds see one another differently than we do them. A white bird such as a gull, swan, or tern may not be entirely colorless when viewed by another bird, for example, a fact that offers opportunities for birds to communicate using colors invisible to humans.

“There is a rich visual world beyond our imagination,” Stoddard said. “Birds might exploit certain channels for communication that would be invisible to predators, or they might evolve colors that are extraordinarily attractive or camouflaged. These ideas set the stage for my strong interest in coloration.”

In grad work at the University of Cambridge, Stoddard explored nest parasitism, whereby certain birds — cuckoos in this case — lay their eggs in the nests of other birds, letting those other birds invest resources in raising the cuckoos’ young.

To pull it off, cuckoo eggs must match the color and pattern of the host species, which have evolved highly individualistic egg patterns in an effort to foil the cuckoos’ strategy.

Being a junior fellow at Harvard — a three-year appointment that ends in the fall — has nourished Stoddard’s interdisciplinary inclinations, she said. The fellowship includes regular dinners with the other 35 junior fellows and with Harvard faculty who are senior fellows. The meetings have introduced her to people working in a whole range of fields.

“The very best part of the Society of Fellows is belonging to a community that is inherently interdisciplinary,” Stoddard said. “It’s opened my eyes to so many new kinds of scientific possibilities. … You really are given complete intellectual freedom. It allowed me to take risks in my research. That has meant the world to me.”

Stoddard’s research recently received an additional boost from the L’Oréal-UNESCO For Women in Science program, which named her an International Rising Talent among female scientists. The award, the second she’s received through L’Oreal, recognized not just Stoddard’s science — it includes a grant for research — but also her mentoring of other women scientists.

Mentoring is something Stoddard has been interested in since high school, when she turned her passion for the violin into skill she could share with middle-school musicians. As she matured into a scientist, she continued to work with younger students, in part out of recognition for those mentors who were important to her own career. At Harvard, she has met regularly for coffee or ice cream with two grad students, with the conversations touching on conference presentations, writer’s block, and any number of other topics.

“It wasn’t long ago that I was a graduate student myself,” Stoddard said. “I feel it’s my responsibility to help others make those transitions.”

Stoddard said that women have made a lot of progress toward equality in science-related fields, but gaps still exist.

“I think that women are very important in scientific discovery, in all aspects of science. Staying engaged and active at all levels is very important.”