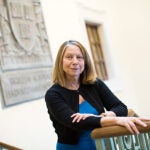 Unfulfilled as a lawyer, Robin Kelsey was drawn to photography and teaching

In an age in which nearly everyone is a photographer, thanks to Instagram and other popular apps, Robin Kelsey is going back to basics. In his new book, “Photography and the Art of Chance,” the Shirley Carter Burden Professor of Photography and chair of the Department of History of Art and Architecture inspects the art form’s rather haphazard nature. The Gazette spoke with Kelsey about his work, his career before art, his thoughts on Instagram and Snapchat, and even about the selfie.

GAZETTE: You were originally a lawyer before studying art. Why the switch from law to art, and how did your focus become photography?

KELSEY: No two people blaze the same trail, right? I went through more than a decade of vocational indecision, and only the patient support of my parents got me through. I actually spent two years in Harvard’s Ph.D. program in fine arts (now the History of Art and Architecture) before leaving to explore other futures, including the practice of law. Ten years later, I was an associate in litigation at a San Francisco law firm, having received a J.D. from Yale. The work was making me miserable. One July afternoon, as part of a program for our summer associates, I went to the San Francisco Museum of Modern Art. The pleasure and meaning I took from my time in the galleries that afternoon stood in such marked contrast to my unhappiness in the office that a switch was thrown. With the support of the woman I was dating at the time and would soon marry, I contacted one of my Harvard professors and began the process of returning to art history. Going through these twists and turns was not easy, but I have no regrets. My varied education and experience comes into play in everything I do now.

The specialization in photography was somewhat accidental. I was actually working on a landscape-painting dissertation when I decided that it would be a good idea to deliver a paper at the annual meeting of the College Art Association. The only landscape panel offered that year focused on photography, so I submitted a proposal on a survey photographer named Timothy O’Sullivan, whose work I had long admired. The paper was very well received, and I was off to the races, betting on a new horse.

GAZETTE: Your book deals with the role of chance in photography throughout history. How does chance complicate a photographic moment? Why is this fascinating to you?

KELSEY: Most everyone who has used a camera understands that chance plays a big role in photography. An experienced photographer can make a great image, but so can a toddler wandering around and shooting haphazardly. As the literature scholar Walter Benn Michaels has noted, taking a photograph is as much a matter of hoping as of trying. What does it mean that the modern world has given so much of its art and visual culture over to a technology prone to chance? Have we been honest with ourselves about the implications of this investment? These are questions that fascinate me.

Let me offer an example. In 1945, Joe Rosenthal made one of the most famous photographs of all time: his image of the flag-raising on Iwo Jima. When Rosenthal packed up the 18 exposures he made that day of the flag raising and put them on the mail plane to Guam, he had no idea that he had produced such an extraordinary image. In fact, when he arrived days later on Guam and learned that one of the 18 photographs he had taken that day had become famous, he had no idea which image it was. The fact that the image is treated as a “work” — garnering Rosenthal a Pulitzer Prize and making him famous — suggests that we have not been terribly honest with ourselves about the role of chance in photography. Would you give someone a Pulitzer Prize for a great poker hand? The issue is not how much credit Rosenthal deserves — he was by all accounts a very brave, decent, and competent man. The issue is rather that we want photographs to bear the meaning of traditional pictures even though the process that goes into them is radically different. In other words, we want from photography all the ease of automation and all the meaning of authorship, and it’s by no means clear that you can have both.

GAZETTE: How is your book relevant today? It seems that nowadays, thanks to Instagram and Snapchat, everyone is a photographer. That happenstance you talk about in your book is so prevalent today with filters, editing software, and more. What is the state of contemporary photography?

KELSEY: It’s odd. On the one hand, chance is enlisted like never before. On the other hand, this enlistment is so vast that the power of chance seems less compelling. When everything seems to be photographed, every accidental image comes to seem inevitable and therefore banal. The power of chance is eroded further by the multiplying means we have of fashioning images after exposure. There are cameras now that allow you to select your focus after the fact. With these technologies, the so-called decisive moment is increasingly something you can concoct after the fact.

GAZETTE: Speaking of social media, what are your thoughts on the ways photos are being used now? Are snaps from our smartphones killing, or at least dulling, the art of photography?

KELSEY: In the analog era, photographs were largely thought of as records or mementos. They bolstered personal and public memory. Today, many young people use photographs as a medium of communication. Here I am, in this cool place, or with my friends, or having fun, the photograph declares. There is no thought about what such a photograph will mean five days from now, much less five years. This is a sea change for the medium.

The radical surge in quantity is also changing photography. How much meaning can a single image bear when there are so many? To cope with the profusion, the reception of photographs has accelerated, and the time spent with any particular photograph has shrunk. Many photographs receive only the time necessary to “like” them or not. I’m fine with that. The random snapshot never actually deserved more. In a sense, the digital deluge has clarified that art in photography requires more than a striking picture.

GAZETTE: Be honest, have you ever taken a selfie?

KELSEY: Of course! It helps that I have long arms.

GAZETTE: What’s next for you?

KELSEY: I’m working on a book about cameras and the ’60s. We associate the ’60s with photographs of street protests, the war in Vietnam, and the psychedelic lifestyle. But many observers at the time were worried that cameras were distorting human behavior and the integrity of social institutions. In the age of the selfie, I think we can learn a lot by recalling a time when public debate raged concerning the artifice of performing for the camera.