Another turning point for Obamacare 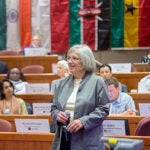 There are several ways U.S. lawmakers could avert chaos if the Supreme Court were to invalidate Obamacare subsidies for millions of citizens, but it’s unlikely they would act on any of them, panelists at the Harvard T.H. Chan School of Public Health said Wednesday.

“It would require a degree of political ability in this country not seen in recent years,” said Robert Blendon, the Richard L. Menschel Professor of Public Health, professor of health policy and political analysis, and senior associate dean and director of the Division of Policy Translation and Leadership Development.

Blendon was among the participants in “America’s Healthcare Future: Implications of the Upcoming Supreme Court Decision about the ACA,” which also featured Katherine Baicker, the C. Boyden Gray Professor of Health Economics and acting chair of the Department of Health Policy and Management; John McDonough, professor of the practice of public health; and Douglas Holtz-Eakin, president of the American Action Forum and former director of the Congressional Budget Office. The event, co-sponsored by the Harvard Chan School and Reuters, was moderated by Sharon Begley, Reuters’ senior correspondent for U.S. health and science.

The case before the court, King v. Burwell, doesn’t seek to invalidate the whole Affordable Care Act. Instead, it centers on a key provision that is intended to make health insurance affordable by partly offsetting the mandate that requires people to buy health insurance.

The government subsidy, given as a tax credit, defrays the cost of insurance for low- and middle-income people who earn too much to qualify for insurance through Medicaid.

The court case involves two different types of insurance exchanges, set up under the ACA. Less than half of the states have created their own exchanges. In the rest, the federal government has stepped in to set up the exchange.

If the court agrees, that would mean that 6.4 million people living in the 34 states where federally established exchanges operate would not be eligible for subsidies to help defray insurance costs. A ruling is expected this month.

Panelists said the potential ramifications extend far beyond individual pocketbooks. Many of those losing their subsidies would become exempt from the law’s mandate because insurance would be unaffordable, and some of that number would opt not to get health insurance, increasing the ranks of the uninsured.

With millions weighing their options, it’s likely that more of those who are sick would decide to pay the extra cost for insurance, Baicker said. This would raise the proportion of sick people in the risk pool, which would force up premiums. That, in turn, could make insurance unaffordable for a whole new group of people, increasing the numbers who become uninsured and skewing insurance risk-pools even further.

Though some states are poised to create their own exchanges if the Supreme Court rules for the plaintiffs, it’s unlikely that the solution lies at the state level, the panelists said. First of all, due to political opposition, probably only a few states would establish their own exchanges. Also, the law includes a deadline, already passed, for a state to create an exchange that qualifies for subsidies.

“I don’t see a uniform state response at all,” McDonough said.

In Washington, Republicans in control of the House and Senate are resolutely opposed to the current law, and the president holds veto power over any GOP proposal to significantly weaken it. Making matters worse, Blendon said, is the run-up to next year’s presidential primaries. The candidates will have to appeal to their bases, which tend to be more ideologically extreme — on both sides — than the general electorate.

The most straightforward fix — altering the law’s language to ensure that all exchanges, whether federal or state, are eligible for subsidies — is unlikely to get much support in Congress, where, in the event of a ruling for the plaintiffs, Republicans would finally have leverage to attempt meaningful changes to the law, McDonough said.

Probably the best response, Blendon said, would be for Congress and the president to get together and agree to extend the law’s provisions through the 2016 election, allowing the vote to be at least a partial referendum on the ACA and paving the way for the next president to work with lawmakers on a more permanent fix.

A reality of the system is that the administration has wide discretion on the vigor of its enforcement, Holtz-Eakin said. In the event of an unfavorable court decision and a political impasse, the administration could ease up on its actions significantly, essentially giving people a break without officially blessing noncompliance until the government sorts it out.

Regardless of the court’s decision and the ultimate resolution on exchanges and subsidies, the rest of the law will survive, the panelists pointed out. McDonough said the potentially affected parts of the law lie in just one of its 10 main sections. The expansion of federal Medicaid for the poorest citizens, coverage for pre-existing conditions, provisions allowing children to remain on their parents’ insurance until age 27, and reforms to streamline the health care industry would remain in effect.

“There are very much human lives at stake here in this decision,” he said.