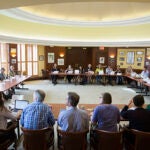 Insights on where we learn

During his two years leading the Roman Catholic Church, Pope Francis has washed the feet of inmates, proposed larger roles for women in the church, and famously shifted the institutional tone toward gay acceptance, saying, “If someone is gay and he searches for the Lord and has good will, who am I to judge?”

On Thursday he again displayed his activist side by delivering a papal encyclical, a formal letter to the world’s Catholic community, titled “Laudato Si” or “Praise Be to You,” which addressed issues involving climate change and the poor. In the nearly 200-page document, the pope ― who has a master’s degree in chemistry ― discussed how the effects of global warming disproportionately harm the poor, backed the science outlining climate change, and called for worldwide action to stop global warming.

Responding to the encyclical, Harvard President Drew Faust said, “Climate change is among the most dire and devastating threats confronting people and the planet today. It was clear from the time he chose to be named after St. Francis of Assisi that Pope Francis would demonstrate a powerful reverence for all living things, and deep compassion for the most disadvantaged among us. In showing how climate change is both a threat to the planet and to impoverished peoples across the globe, Pope Francis’ encyclical highlights climate change as one of the most urgent social justice issues of our time.”

To better understand the issues in play, the Gazette spoke with three Harvard scholars about the papal encyclical, its policy implications, and its likely impact on both the church and the international debate on climate change.

GAZETTE: What is an encyclical, and how important are they?

FIORENZA: It’s a letter that the pope writes to the whole church that has penultimate authority. The highest authority is when the church defines something as doctrine. This is not quite at that level, but it is sort of the highest teaching that the pope can give that has to be taken seriously, with a considerable amount of respect. In that sense, it’s really very important, and it’s been a priority for Pope Francis, who had announced, almost from the day he was chosen, that he would write an encyclical on the environment.

GAZETTE: Is there a history of the Vatican making statements on climate change?

FIORENZA: Your question points to why I am a little bit puzzled by the reaction of certain Roman Catholic politicians. Pope Paul VI discussed the ecological concern as a tragic consequence of human activity in an encyclical from the 1970s. The first encyclical of John Paul II warned that humans saw no meaning in the environment except for its immediate use and consumption. Pope Benedict XVI also addressed the environment. What is overlooked is that the American bishops on June 15, 2001, issued a document voted on by the whole conference of bishops titled “Global Climate Change: A Plea for Dialogue, Prudence, and the Common Good.” In it they underscored the responsibility to address global warming, the role that the human use of fossil fuels has had, and the disproportionate impact global warming has had on the poor. I am kind of surprised that people think what Francis is doing is new.

GAZETTE: Is there anything really new in this document?

FIORENZA: Yes and no. The basic moral and religious imperative is the same. He is really saying the environment is a moral and religious issue. He’s not saying you can consider it just a purely economic or political issue [so] that the pope has nothing to say about it. What’s different is the starkness of his description of the environment: He goes into detail on the increased pollution, the scarcity of water, the loss of biodiversity, the decline in the quality of human life. And he also says that the very causes of these effects are the causes that are leading to a breakdown in human society and global inequality. That is perhaps much stronger than in the other encyclicals from other popes. He also criticizes at length an excessive confidence in technology alone and says what is needed is global dialogue and international cooperation. But he balances this global emphasis with what he calls a notion of “cultural ecology.” He is saying globalization is threatening not only the environment but also local cultures, and that we must preserve the earth and those cultures for the future.

Joseph Aldy is an assistant professor of public policy at Harvard Kennedy School whose research focuses on climate change, and energy policy and mortality/risk valuation.

GAZETTE: Many have called the encyclical at odds with the work of policy analysts who recognize the need for the use of market-based policy instruments — carbon taxes and/or cap-and-trade systems — in combatting climate change. What are your thoughts?

ALDY: Having the pope say “Climate change is a major problem: Let’s acknowledge the work of all the good scientists around the world saying we are causing this problem, and that we need to act” is really important. On the policy approach, I was puzzled to find such a strong opposition to using market-based approaches like cap and trade. Last year at the United Nations General Assembly, heads of state came together to talk about climate change. We had an announcement on carbon pricing signed on by more than 70 countries, more than 1,000 businesses — reflecting this emerging view of both those in public policy and those using the technologies in the business world — that pricing carbon is the way to get us off of fossil fuels, to create that incentive for the technologies that will allow us to still enjoy the level of economic development that we aspire to, without having an adverse impact on the climate. In terms of how the pope’s letter might guide policy design and policy implementation, I think it is out of step with the scholarship and where the public policy community is going.

GAZETTE: How do you think the pope’s encyclical will affect the upcoming global climate talks in Paris in November?

ALDY: In 2009, in the run-up to the talks in Copenhagen, we had heads of state discussing the issue in their bilateral meetings, at the G-8, at the G-20, at the Major Economies Forum, and at the United Nations. This year, having world leaders, including now the pope, talking about this issue can again galvanize attention and interest and serious thinking about how we need to work together in Paris and beyond.

GAZETTE: In the document, the pope criticizes big business for its role in contributing to climate change. Will his words have an effect on how executives run their companies, or possibly even lead to the creation of more sustainable forms of energy?

ALDY: Some of what’s in this strikes me as cutting at the core of really what businesses do. So there is a question then of whether they react as if this is a leader talking about how they need to behave more responsibly, or whether this is someone who is stating that he is really in opposition to what it means to run a business. It’s a fascinating document. But I can imagine there are some who will respond by pushing to be more sustainable because of it, and others who will say this is in opposition to the way they operate as a business. This latter group may think it is doing good things for the planet and its shareholders, and this isn’t going to change the way it does things.

Naomi Oreskes is a history of science professor in Harvard’s Faculty of Arts and Sciences who has written extensively on climate change.

GAZETTE: Since climate change denial is often associated with the conservative right, and the religious right is part of that political faction, do you think the pope’s leadership on this message will sway their thinking?

ORESKES: There’s no way to know, of course, but I do think this will call the issue to the attention among groups and individuals who up until now have either been skeptical or just not paying attention. And it also shows that this is not a left-wing hoax.

GAZETTE: What do you think the scientific community’s reaction will be to this encyclical?

ORESKES: Most of the scientists I know are very happy, or perhaps I should say relieved. Scientists have recognized for a long time that climate change is a moral issue, but have felt unable to speak to the moral dimension. Now they have a revered moral authority doing it for them. It’s very helpful.

GAZETTE: Do you think the pope’s letter can really change the discourse around climate change?

ORESKES: I certainly hope so!