The women who questioned Wall Street 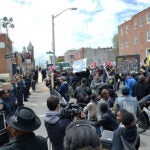 Call them the “Cassandras of capital” or perhaps, as a Time magazine cover story in 2010 dubbed the women, the “New Sheriffs of Wall Street.”

In recent years, Sheila Bair, Mary Schapiro, and Elizabeth Warren have been pictured as bold — and often unwelcome — gunslingers who fired some of the earliest warning shots about Wild West excesses and corrupt practices on Wall Street long before the 2008 Great Recession set in. After their warnings went unheeded but proved accurate, they set about trying to institute meaningful financial reforms from inside federal agencies and through politics.

Bair headed the U.S. Federal Deposit Insurance Corp. (FDIC) from 2006 to 2011, where she oversaw implementation of the Dodd-Frank Act, which sought to rein in risky bank-run investment schemes and pushed aggressively for greater transparency and accountability.

Schapiro was appointed by President Barack Obama in 2009 to chair the U.S. Securities and Exchange Commission (SEC), the first woman to hold that post on a permanent basis. As chair, she led a number of comprehensive market reforms to protect investors and minimize the likelihood of future crashes.

Warren, now a U.S. senator from Massachusetts, was a Harvard Law School (HLS) bankruptcy professor who became a progressive Democratic leader as a vocal critic of government policies that benefit Wall Street but not everyday consumers.

On Monday, the trio talked about women and power in Wall Street finance, where macho culture is celebrated. Pulitzer Prize–winning journalist Ron Suskind, now a fellow at the Edmond J. Safra Center for Ethics at HLS and director of the Project on Public Narrative, which hosted the session, introduced the panel and asked if it was gender or their reform agendas that drove the “skunk in the garden party” receptions they each received. The panelists said it was hard to be certain, and not particularly helpful to spend much time worrying about it.

“Because even if you can figure out if the issue of gender is in the room, there’s not much you can do about it,” said Schapiro, who was the target of an industry-led billboard campaign after trying to put in rules to rein in unstable money market funds. “The way you have to defeat the stereotypes and the negativity around gender, prejudice, and bias is by being really good at what you do, really clear about where you’re going, why you think the path you’re taking is the right path, so that you can always defend it. Because at the end of the day, you have to be able to support what you’ve done.”

Despite studies that say businesses perform better when women hold key roles on company boards and in executive suites, the panel said the ongoing shortage of women in top positions is a function of the clique-ish nature of the corporate world and the often-closed loop of executive search firms.

“I think of this as ‘The Club,’ ” said Warren, discussing corporate exclusiveness and the desire to protect and limit who gets to hold the levers of power. “The group who’s there doesn’t want disruption. And when you bring in people who aren’t part of ‘The Club,’ it’s very disruptive — or it can be.”

“Sure. Why not?” said Warren. “I didn’t go to Washington to try and help those guys. Believe me, they already have an army of lobbyists and an army of lawyers and plenty of friends on Capitol Hill.

“Federal policy really matters. It is not an abstraction” to regular families, she said. “And if some billionaire wants to fight me over how it’s going to cost them a little if we raise the minimum wage and lift 14 million children out of poverty, then I’m ready for them.”

As for what kind of Wall Street “sheriff” Democratic presidential candidate Hillary Clinton might be if she won the White House, the three were cautious about any predictions.

Bair, a Kansas Republican, said she’d wait to see what Clinton’s policies are, but worries about her willingness to be a reformer given her “very Wall Street–centric” track record as a past candidate.

Saying she has “no idea,” Schapiro, a Democrat, hoped that Clinton would not try to undo existing regulations around corporate disclosure and would focus her efforts on more structural reforms that ensure market integrity and promote transparency and fair dealing. Requiring businesses to disclose bonus payouts and other activities is a key component of any industry cleanup, she said.

“It’s amazing what people will stop doing when they have to tell the world what they’ve been doing,” said Schapiro.

Warren said the 2008 financial crisis flashed an unflattering spotlight on how Wall Street operates and how many federal policies look out for the industry’s bottom line rather than the public good. Even today, many people outside of Washington, D.C., and lower Manhattan view the financial services as insufficiently regulated and not completely safe.

“Hillary Clinton will have a chance over the next few months to lay out what she wants to do, and I think she has a real opportunity here,” said Warren. “I believe there’s a broad, national consensus for making Wall Street more accountable for what they do. This is a moment to seize that.”