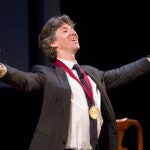 Exhibit shows how class albums evolved, and photography along with them

Later this month, graduating Harvard seniors will get a class album memorializing their years of study and play. It will have hard covers, contain 500 pages on glossy stock, and weigh about 4 pounds — 16 ounces of memories per year.

An exhibit at Pusey Library demonstrates how the first Harvard class photograph albums evolved. In the antebellum 19th century, photography was young, image technologies were changing fast (often with Boston practitioners in the lead), and Harvard students began adding the visual to the repositories of memory that for centuries had been dominated by text.

“We Carry With Us Precious Memorials,” on view through June 29, begins with Harvard’s Class of 1852. Its 85 seniors — who appear to be “breezy, jovial characters,” the curators note — were the first to have their pictures taken for a collective photographic memento.

The exhibit was a partnership of two Harvard Library departments, the Weissman Preservation Center and the Harvard University Archives. (The class albums can be viewed in HOLLIS, as well as on the exhibit website.)

Harvard’s first class portraits are striking: 85 vivid daguerreotypes set into a handsome, custom-made chest of wooden drawers. The silver-coated copper plates were the work of pioneer Boston photographer John Adams Whipple, who made daguerreotypes in their heyday, the two decades following 1839. “The daguerreotype process yielded images that were exquisitely detailed and luminous,” said exhibit co-organizer Melissa Banta, a projects curator at Harvard.

The Class of 1852 daguerreotypes were given to the University Archives, which were then just a year old. This collection of class photographic portraits was the first predominantly visual artifact of its kind, said University archivist Megan Sniffin-Marinoff. “Students at the time were using new technologies, just like they are now, to capture memories.” Before the breakthrough Class of 1852 daguerreotypes, she added, “memories for students were written” in letters and diaries.

To get their pictures taken, the Class of 1852 seniors — whisker-proud and togged out in waistcoats, starched collars, and ties — reported to Whipple’s sky-lit studio on Washington Street in Boston. Among them was Horatio Alger Jr., reputed to be the smallest member of the class, and later the wildly successful author of the “Ragged Dick” series and other juvenile literature.

Whipple used a technique he called “crayon portraiture” to give his daguerreotypes a soft, diffused quality. He also produced the first daguerreotypes of the moon, taken through the telescope at the Harvard College Observatory. From 1856 to 1859, when Harvard class albums were evolving fast in size and character, Whipple was a partner with James Wallace Black, whose pictures of Boston, shot from a hot air balloon in 1860, were America’s first successful aerial views. They showed “Boston, as the eagle and wild goose see it,” wrote Harvard Professor of Medicine Oliver Wendell Holmes.

Daguerreotypes, one-of-a-kind images, were taken for the Class of 1852. Salt-print copies were made so students could have pictures of their classmates. (Salt prints, introduced by photography pioneer William Henry Fox Talbot in the 1830s, represented the first negative-to-positive photographic technique.) To sharpen the appearance of the copied images, Whipple devised the “crystalotype” by coating his glass negatives with a thin layer of an emulsion of albumin (from hens’ eggs) and honey.

From 1853 to 1864, Whipple created salted paper prints from glass-plate negatives taken of the students for the Harvard portraits. He and others in that era continued experimenting with other coatings, including gelatin, gum arabic, wax, casein, and shellac. Starting in 1865, albumin prints (prints coated with albumin emulsion before they were developed) became the dominant technology.

Students could now gather prints together in what would become the first photographic class albums. Making so many salt prints for image-hungry college seniors required a photographic assembly line. Negatives were clamped into large wooden frames, placed against paper coated with light-sensitive silver salts, and exposed to sunlight on the studio’s rooftop. Holmes, who dabbled in photography, marveled at the scale of the Whipple & Black enterprise.

Compared with common black-and-white photographs from the 20th century, salt prints are more sensitive to light and, to some degree, more subject to fading. “We worked very hard to meet the best environmental conditions in the newly renovated cases for this exhibition,” said Weissman photograph conservator Elena Bulat, who organized the exhibit with Banta. “We have very low levels of light, relative humidity, and temperature in the cases. We also limited the time for displaying the objects.”

The exhibit is part of the Salt Print Initiative being undertaken by the Weissman. It’s a University-wide initiative to identify, conserve, study, and enhance access to the thousands of salt prints in Harvard’s archives, libraries, and museums. Programs include workshops on the history and identification of the medium, condition surveys, guidelines for housing and storage, conservation treatment, material analyses, cataloging and digitization of selected collections, exhibitions, website development, and a symposium.

These programs, as well as recent advances in material analyses, are helping to uncover a wealth of data about Harvard’s early paper photographs. The initiative, for example, is studying nine of the era’s predominant coatings, and has built a reference library to identify the coatings used in Harvard class albums. “We had great success,” said Bulat. “So far we were able to identify gum arabic, dextrin, and sandarac coatings.”

Knowing which coating was used helps conservators as well as collection managers make appropriate treatment decisions, can aid in devising preservation recommendations, and — along with other information about the object — can help with attribution.

Part of the Salt Initiative involves a new methodology to identify coatings with the help of Harvard’s Center for Nanoscale Systems. FTIR (Fourier Transform Infrared) in reflection mode does not require contact with a fragile print.

Harvard seniors assembled salt-print images in small, personalized notebooks — the eclectic assemblages of images and text that prefigured the class albums we see today. The exhibit features the notebook album of Samuel Fisher Haven, Class of 1852. It’s the size of a small paperback.

In later years, during reunions or other events, classmates continued to contribute to the official class album by adding pictures of their older selves, newspaper clippings, obituaries, and notes on occupations and war records. In addition to revisiting the official class albums, graduates could order their own custom-made albums.

By 1861, Harvard class pictures were the work of George Kendall Warren, a Boston celebrity photographer who did college album work for Yale, Brown, Princeton, and other colleges. Harvard seniors assembling their own books requested prints from an order form of 100 or more images.

Among them were views of college buildings, elm-treed Harvard Yard, and prominent faculty, including Holmes. A circa-1860 Warren portrait of Aaron Molyneaux Hewlett, on view in the exhibit, was available on the order form. Hired in 1859, he was director of the Harvard Gymnasium and the University’s first black staff member.

Images of landscapes, a Warren specialty, were offered too. Most popular were the photographer’s romantic renderings of Mount Auburn Cemetery, the nation’s first landscaped rural burial ground. Though it was a mile and a half from Harvard Square, the cemetery’s wooded rolling acres were considered a geographical adjunct of Harvard.

By 1861, seniors could also order up more quotidian images, including those of “goodies,” female dorm room housekeepers, and of colorful off-campus personalities. The exhibit includes a portrait of Niccoline, the “candy boy” of Harvard Square.

By 1864, the class albums that students customized for themselves had grown to embossed tomes 3 inches thick that could weigh 20 pounds or more. “The size and elegant production of the albums reflects the growing prestige of Harvard itself as it was transitioning from a college into a major university,” said Banta.

By 1890, she added, the era of “more intimate, customized” albums came to an end. Replacing them were printed volumes of uniform design and content — the first yearbooks of the modern era.

“We take yearbooks and class books for granted,” said Sniffin-Marinoff, who praised the exhibit for bringing together within one theme the worlds of photo curation and photo conservation. “We never think of the history.”