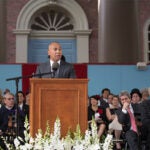 No time to rest, Patrick says

With cameos by former Massachusetts Gov. Deval Patrick, world-famous soprano Renée Fleming, and even Academy Award-winning actress Natalie Portman ’03, Harvard’s 364th Commencement could not be described as boring. But in between the moments of glamour and the reverence of tradition were deep-hitting remarks about the newly minted graduates’ place in a shifting world.

President Drew Faust reminded alumni that Harvard’s work is “about that ongoing commitment, not to a single individual or even one generation or one era, but to a larger world and to the service of the age that is waiting before it.”

Patrick, the speaker at Afternoon Exercises, told the crowd, “I want us to be uneasy about the chronic desperation of communities some of us are just one generation away from living in; about the way we dehumanize the fellow souls we call ‘alien’; about the carelessness with which we treat the planet itself.”

There were laughs, certainly tears, but as Plummer Professor of Christian Morals and Pusey Minister Jonathan Walton observed, this week is called Commencement because it’s “only the beginning.”