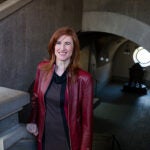 On Friday, three recipients of the nation’s highest military award ― all Vietnam veterans ― toured Harvard’s Memorial Church. They were part of an advance team for the South Carolina-based Congressional Medal of Honor Society, which will hold its annual convention in Boston from Sept. 15 to 20 and include a Harvard venue for the first time. Expected at the convention are about 65 of the 79 living medal recipients.

The church, which was dedicated in 1932 as a memorial to the Harvard students, graduates, and faculty killed during World War I, will host a private event on Sept. 18 honoring recipients who had died in the previous year. “This is the one thing that’s really important” at every convention, said Victoria Kueck, the society’s director of operations.

So far, there have been no deaths in the past year among recipients. “The count is zero,” said 30-year Navy veteran Thomas G. Kelley of Somerville. The remembrance ceremony will take place in any case.

Kelley was awarded the medal for leading a 1969 rescue mission by eight riverine assault craft in Kién Hòa Province, Vietnam. Of the years since, he said, “I picked up the pieces and moved on.”

In addition to the private event in September, organizers hope to schedule a gathering where veterans and the University’s community of active service members can meet the medal winners.

“We are all so proud of hosting this on campus,” said Thomas Reardon ’68, who served in Vietnam as an Army infantry officer and today is president of the Harvard Veterans Alumni Organization.

About 250 current students are either veterans or are in school while on active duty, he said. About 25 undergraduates are enrolled in the Reserve Officers Training Corps, which was welcomed back to Harvard in 2011 after a hiatus of 40 years.

“It’s incredible humbling,” she said of seeing three Medal of Honor recipients at once. “They’re hard to come by.”

Harvard’s relationship to military service goes well back into the 17th century, starting with the 1636-1638 Pequot War. “Our history is proud and long,” Reardon said. Over centuries of American wars, more than 1,200 Harvard students and graduates have lost their lives.

Aside from the Army and Navy service academies, Harvard has more Medal of Honor recipients ― 18 ― than any other U.S. institution of higher education. That number could grow by one, joked Reardon to Kelley, “If Tom wants to take a couple of courses.”

“I wish I had gone to Harvard,” offered retired Army Colonel Bruce P. Crandall, a Washington state resident who returned from more than 900 combat flying missions in Vietnam with his sense of humor intact. “I went to seven universities before I got a degree.”

Crandall was awarded the Medal of Honor in 2007 for flying repeated evacuation and supply missions in an unarmed helicopter during the 1965 Battle of Ia Drang, fictionalized in the 2002 Mel Gibson movie “We Were Soldiers.” Crandall, who was first awarded the Distinguished Service Cross, arrived at Memorial Church with his dog Huey, who napped through the tour while tucked into a blue duffel bag. (The Bell UH-1 Iroquois helicopters of the Vietnam era were nicknamed “Hueys.”)

With Crandall and Kelley on the church tour was 27-year Army veteran Harold A. Fritz, president of the Congressional Medal of Honor Society. Fritz was awarded the medal for directing the hand-to-hand defense of an armored column in January 1969, while surrounded by the enemy in Binh Long Province, South Vietnam.

A plaque naming all of Harvard’s Medal of Honor recipients, including eight from the Civil War, hangs on the north wall of the church, which now memorializes Harvard’s dead from World War I to Vietnam. The list of dead from World War II alone, 697 names engraved into stone, covers an entire wall, floor to ceiling.

Three of Reardon’s classmates were among the 22 the University lost to Vietnam. The University claims one Medal of Honor recipient from the conflict, Army Staff Sergeant Robert C. Murray, who left Harvard Business School to enlist. He was killed in 1970.

Thomas J. Lyons, chairman of the Boston Congressional Medal of Honor and a member of its convention committee, looked on as the three war heroes toured Memorial Church, then stood together making plans for September.

The society has held its convention in Boston twice before, in 2001 and 2006, he said. Both times the remembrance ceremony took place in Boston’s Old North Church, which played a role in Paul Revere’s midnight ride during the Revolution.

But, said Lyons, why not Memorial Church, a shrine to the dead of so many American wars? It is just a few hundred yards from Cambridge Common, where in 1775 the first American army was mustered. Walking into the solemn space, he said, “just blew me away.”