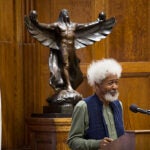 Nigeria at the crossroads

Baltimore unrest echoes some larger challenges in ties between police and citizenry, analysts and report say

The death of African American Freddie Gray in Baltimore, stemming from injuries he sustained while in police custody, sparked days of peaceful protests as well as episodes of violence and vandalism this week. The unrest prompted city and state officials to call in the National Guard and institute an overnight curfew.

Gray was arrested on April 12 for allegedly carrying a pocket knife. A family attorney said he suffered severe spinal cord injury while in police custody, but did not receive timely medical attention; he lapsed into a coma and died a week later. The state medical examiner ruled Gray’s death a homicide caused by injuries received in a police van, according to Marilyn Mosby, the state’s attorney for Baltimore. Mosby has filed initial charges against the six police officers involved.

To some observers, Gray’s death is another harsh chapter in the historically contentious relationship between the Baltimore Police Department and the city’s African-American citizens. But for others in Baltimore and beyond, the incident looked strikingly similar to recent cases in which black men died during police encounters in North Charleston, S.C., Staten Island, N.Y., Ferguson, Mo., and Cleveland.

Harvard experts who study policing suggest that while media attention has rightly focused on Baltimore’s longstanding economic and racial inequalities, less consideration has been given to the ways that policing practices and strategies, command structures, recruitment and training, and internal culture may have contributed to an adversarial relationship between many African-Americans and police around the nation.

“Injustice is criminogenic; it creates crime. So when people ask why is it that the people in Baltimore are burning down their own parts of their city, I have been really impressed with the people of Baltimore who then replied, ‘We have been protesting peacefully for nine days, and no one cared. No one was covering it,’” said Phillip Atiba Goff ’99, a visiting scholar at the Malcolm Wiener Center for Social Policy at HKS and an associate professor at the University of California, Los Angeles. “It’s an established scientific consensus that where you have a corrosion of the legitimacy of police, you also have a corrosion of cooperation with the law and compliance with the law.”

In the last 50 years, the police profession has “veered away from Sir Robert Peel’s ideal, that ‘the police are the people and the people are the police,’ toward a culture and mindset more like warriors at war with the people [they] are sworn to protect and serve,” concludes a new report published by the HKS Program in Criminal Justice Policy and Management as part of its six-year collaboration with the National Institute of Justice.

Beginning in the mid-1990s, the report says, police departments in many American cities broadly applied so-called “zero tolerance” policies that prioritized reducing the number of reported serious crimes, clearing cases quickly, and lowering incident response times, but also measured officers’ productivity in the number of citations, stops, and arrests they made, even if only for minor infractions.

“The solitary focus on reducing reported crime rates can make you look successful. Meanwhile, it can be a disaster in terms of the actual police tactics used and the effects on integrity,” said Sparrow, who has studied police performance metrics.

Sparrow worries about the persistence of “racism and brutality, arrogance, [and] authoritarianism” within police ranks, and a lack of police accountability and transparency. He questioned enforcement strategies that target low-level offenses as a means of flexing authority and meeting internal benchmarks, not community needs, as outlined in the Justice Department’s highly critical report about the Ferguson Police Department.

The 2001 terrorist attacks accelerated the shift away from community policing to current practices. “These core ideas for police strategic development have been stymied and … bastardized one way or another over the last two, three decades. And the advent of 9/11 and the focus on domestic security … helped to twist, first of all, the emphasis on problems away from local community problems to national security problems, and it also distorted the motivation for relationships with communities,” said Sparrow.

Also damaging are recruitment and academy training that too often stress technical and physical skills over critical thinking, emotional intelligence, and decision-making — all vital tools to building and maintaining the trust and cooperation with citizens that allows for preventing crimes before they happen and peaceful problem-solving, say Sue Rahr and Stephen K. Rice, the report’s authors.

Meanwhile, the standard top-down management model of police departments, where deviation from rules and procedures is strongly discouraged, “has the unintended but powerful consequence of conveying a distrust of officers by their leaders. It is no wonder that one of the hallmarks of law enforcement culture is reciprocated distrust and disdain of police leadership by rank-and-file officers,” the authors wrote. That same dynamic spills over into the streets, fostering distrust between the police in power and the citizens under their control.

Goff, whose Center for Policing Equity is assembling the first national database of police stops and arrests, said that the lack of transparency and accountability by police departments, which some critics see as institutional arrogance, is really a product of civic disinterest. “This is really the resonance of ‘Black Lives Matter.’ If we cared about those people, we would have” demanded this data, he said. “This is not a new phenomenon, and all indicators suggest that, at least in major cities, these issues are getting better, not worse. And yet, that ‘better’ is not good enough.”

Although some police have been reluctant to provide detailed information about their work to outsiders for fear it would be used against them, Goff said that’s no longer an acceptable response.

“At this point, it’s counterproductive for law enforcement to resist changes that increase transparency and accountability, because they’re coming one way or the other,” he said. “The important thing is to make sure that they’re coming in ways that actually make the relationships with those communities that have been traditionally adversarial better, as opposed to just making law enforcement more of the problem.”

The Baltimore unrest is both a microcosm of problems and tensions that exist between citizens and police in many places, and an exception to other conflicts.

“Baltimore is not alone in the way that it will respond and has responded to its police department, but Baltimore is absolutely its own unique mixture of toxic history and difficult relations and inspiring community leaders. That gets you the protests you saw and then real adults taking people off the streets around 10:30 p.m. before law enforcement got heavily involved in coercive tactics,” said Goff. “That’s not at all what happened in Ferguson.”

Goff recalled how a police chief once pulled him aside and asked for help assessing his department’s performance statistics, with the chief saying he wasn’t sure whether they suggested positive or negative trends. “He said, ‘I do know we are one dead black teenager from this whole place burning to the ground.’ And the worst part about it is you have no idea where it is because it could be Anywhere, U.S.A.”