‘Destruction across the city’ 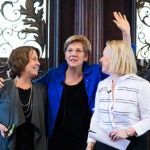 The women who questioned Wall Street

Lara Phillips, an instructor in emergency medicine at Harvard Medical School and an emergency physician at Harvard-affiliated Massachusetts General Hospital (MGH), was high in the Himalaya Mountains when the deadly, 7.8-magnitude earthquake struck Nepal on April 25.

A wilderness medicine fellow with the Himalayan Rescue Association Nepal, Phillips said the initial damage was light in the rural Annapurna region where she worked. She and her colleagues decided to close the organization’s high-mountain clinic and offer help in areas of greater need. They planned to travel through the badly damaged capital of Kathmandu and on to another hard-hit region, Sindhupalchok.

The Gazette reached Phillips via email over the weekend while she was in Kathmandu preparing for the trip to Sindhupalchok, and asked about her experiences.

GAZETTE: Where were you, and what were you doing when the quake struck? What did you see around you at that time?

PHILLIPS: During the earthquake, I was on a day hike. I was stationed at Thorong Phedi, working in a satellite clinic through the Himalayan Rescue Association and going for a day hike to high camp about 30 minutes away, [at] around 16,000 feet.

I heard a deep rumble, and the ground shook. I looked around to make sure I was not in the way of an avalanche. I had never been in an earthquake before and assumed it was an avalanche on the other side of the mountain. I stopped in a teahouse at high camp when a second quake occurred, and there was no mistaking that this was an earthquake, as everything in the teahouse was rumbling. Everyone ran outside.

Fortunately, no one was injured. By the time I hiked back to Thorong Phedi, all communication was cut off. The Internet, phones, even our satellite phone was not working for over 24 hours. It wasn’t until later that we heard the extent of damage and tragedy. The following day, when the satellite phone was working, I called my husband and parents. We then passed it around to the Nepali staff that had family and friends in Kathmandu who were anxiously awaiting to hear from their loved ones.

GAZETTE: What have you been doing since then?

PHILLIPS: A day after the earthquake, we were able to get in contact with our colleagues at the Himalayan Rescue Association (HRA). Communication was still difficult even with the satellite phone. Therefore, we descended to Manang … over the next two days, where our main clinic is located. Discussions were under way as we made a difficult decision on whether or not to close the HRA clinic.

The clinic in Manang serves the local Nepali community in addition to trekkers traveling through the Annapurna circuit. While the volume of trekkers declined after the earthquake, we still had a responsibility to the local community. Fortunately, Manang was largely unharmed by the earthquake. The volunteer doctors also felt a responsibility to assist in areas that were devastated by the earthquake. And ultimately, after discussion with the HRA, a decision was made to close the clinic for the season and send support to those villages in need. We mobilized medical supplies and departed for Sindhupalchok, a three-day journey from Manang.

GAZETTE: Why are you in Nepal in the first place?

PHILLIPS: I am a Wilderness Medicine Fellow at Massachusetts General Hospital. As part of the fellowship, I am honored to have the opportunity to volunteer through the Himalayan Rescue Association in a high-altitude clinic in Nepal. I was stationed at Manang, 11,600 feet, and Thorong Phedi, 15,000 feet, for three months.

GAZETTE: How are conditions in Kathmandu? It’s been a week since the quake; are there signs of recovery? What is the state of mind of people there?

PHILLIPS: One week after the earthquake, there is evidence of destruction across the city. Some areas have remained unharmed, while others are devastated. Many Nepalis sleep in tents, either because they lost their homes or for fear of staying in their homes during an aftershock.

Trekkers [who were] roaming through the streets are now replaced by volunteers seeking to help this country. Amidst the heartbreaking tragedy, it is inspirational to see that so many people want to help. Different voluntary organizations have been working tirelessly [launching] rescue teams, [on] delivery of supplies, and setting up field hospitals. I spoke with some people in Nepal [who] describe the state of mind of the people there as “traumatized, fearful, and frustrated.” They are grateful for the international support.

GAZETTE: What about your plans to head to Sindhupalchok? Why go there?

PHILLIPS: We plan to head to Sindhupalchok, as the area suffered massive losses of human life, housing, and livestock. The area is reported to be devastated, with 80 percent to 90 percent of buildings rendered uninhabitable. We are planning about a five-day visit to assess medical needs and provide medical outreach. We will be in communication with the HRA by satellite phone and may extend the trip or move to another location in need.

GAZETTE: A week after the quake, what do you think it’s important for the Harvard community to know?

PHILLIPS: I want the people at Harvard to know that they are a part of an incredible community. Yesterday, a team from MGH arrived to help with relief efforts. It also took less than 24 hours for the doctors in the emergency medicine department to cover each others’ shifts, making it possible for others to deploy to Nepal. It’s a horrible tragedy, but inspirational to witness the selfless actions of others.

The Harvard T.H. Chan School of Public Health will conduct a live webcast from 12:30 to 1:30 p.m. Thursday. “Humanitarian Response to the Crisis in Nepal” will offer insight as experts discuss what was predicted to occur in Kathmandu in the event of a major earthquake — even before one occurred. Post your questions in advance at communications@hsph.harvard.edu, or online during the event via Twitter using the #HarvardNepal hashtag.