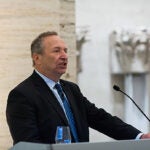 Health as an economic engine

Navigating a cluttered environment at high speed is among the greatest challenges in biology. Yet it’s one virtually all birds achieve with ease.

It’s a feat that David Williams is working to understand. A former postdoctoral fellow in the Harvard lab of Charles P. Lyman Professor of Biology Andrew Biewener, and now a postdoc at the University of Washington, Williams is the lead author of a study that shows birds use two highly stereotyped postures to avoid obstacles in flight.

The study could open the door to new ways to program drones and other unmanned aerial vehicles to avoid similar obstacles. The study is described in a paper recently published in the Proceedings of the National Academy of Sciences.

“This was somewhat surprising to us,” Williams said of the results. “In lower-order animals like insects, we think of these very stereotyped motor programs where you stimulate your muscle, and the passive dynamics of your exoskeleton or the tendons attached to that muscle control most of the motion.

Here pigeons use the wings paused and wings folded postures to squeeze between a set of obstacles. The paused case is used more where gaps are larger and allows faster traversals with less height loss. The folded case, used in tighter settings, is significantly more resistant to collision-induced loss of control. Video credit: Ariah Kidder

While most other research into bird flight has focused on what scientists call “clear-sky” flying, Williams’ study was focused on understanding how, once birds identify gaps between obstacles — whether those are buildings, cars, or trees — they adjust their in-flight posture to squeeze through those spaces.

“A big part of biological motion is energy minimization and robustness,” he explained. “You want to be able to get around without exhausting yourself, and if you do hit something, you don’t want it to be something that’s unrecoverable. You don’t want to fall to the ground, or to break a wing.”

The expectation, Williams said, was that birds would adopt a myriad of postures to allow them to fit between obstacles of varying sizes. The reality, however, was more interesting.

In the first posture, what Williams calls “wings paused,” the birds’ wings are held wide out, at the top of the upswing of their flapping. In the second, the birds tuck their wings back against their bodies, almost as if they were perched on a branch.

“The paused posture … interrupts their wing beat cycle for shorter periods of time, so they tend to lose less height, and their wings are ready to hit the air running, so to speak,” Williams said. “We thought maybe they were using the ballistic posture in cases where they want to get smaller, but it doesn’t actually make them much smaller from a forward angle. What it does do is reduce the amount they’re going to rotate or be disrupted if they do collide with anything.”

To understand the birds’ in-flight postures, Williams and colleagues built a 20-meter-long flight corridor — essentially an obstacle course consisting of a number of vertical poles — for birds to fly through.

Researchers then fitted pigeons with small backpacks that powered a series of tiny, infrared LEDs, which were placed along the birds’ backs, at their wingtips, near their wing joints, and on their heads. As the birds flew through the corridor, the LEDs were tracked by an array of five high-speed cameras, allowing researchers to determine their postures precisely.

Going forward, Williams said, researchers hope to expand the study to include horizontal obstacles similar to tree limbs. The findings in the current study may offer insight into how unmanned aerial vehicles could be programmed to avoid obstacles.

“When most people think about drones, they think about quad-copters … people are getting better at controlling them through very narrow and complex obstacle courses, but there are experimental flight devices that feature adjustable wing-aspect ratios,” Williams said. “This suggests that if we can build the brains into the material structure of an object, rather than into the computation controlling the object … we can change the stability through that mechanism.”