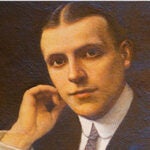 Evening presents a cross-section of vivid artistic experiences at Harvard

On a misty evening, the ramp connecting the Carpenter Center for the Visual Arts and the Harvard Art Museums was electrified by the words of Harvard scholars past and present.

“Harvard Voices,” an interdisciplinary arts production sponsored by the Harvard University Committee on the Arts, was performed April 9 by eight students and two alumni. Produced in partnership with the American Repertory Theater (A.R.T.), the event offered dynamic literary, theatrical, and musical experiences inside and outside both arts venues.

“We wanted to juxtapose a number of Harvard perspectives,” said Allegra Libonati, A.R.T.’s resident director. “We thought theater, with its incorporation of visual and textual media, and its ability to share different times and voices, was an interesting way for audiences to encounter the shape that interdisciplinary ideas about the arts have taken on Harvard’s campus.”

The performance captured the attention of an audience departing from an earlier, related event at the Carpenter Center titled “Staging Ground for the Visual Arts: A Conversation with Martin Beck and Liz Lerman,” in which the artists shared their experiences producing site-specific works at Harvard, during a discussion with James Voorhies, the John R. and Barbara Robinson Family Director of the Carpenter Center.

“Harvard Voices” was an example of that artistic approach, and highlighted the strength of the University’s involvement in the arts, as well as the strong partnerships between the University community and the two Quincy Street art institutions.

“Harvard Voices” began at the Carpenter Center’s first-floor doorway, where a small audio speaker projected a 1986 reading of the poem “Villanelle for an Anniversary,” by former Harvard professor and poet-in-residence Seamus Heaney. The audience was then ushered outside, and toward various stops along the ramp to watch more student performers and listen to other recordings of poems by Harvard professors and alumni.

These included T.S. Eliot’s “Burnt Norton” (selections), James Laughlin’s “What the Pencil Writes,” and Adrienne Rich’s “Burning Oneself Out.” Chosen for their relevance to each performer and to locations along the ramp, the poems were ordered in a manner that brought listeners on a journey, both figuratively and literally, Libonati said, as they approached the Harvard Art Museums’ entrance on Prescott Street.

After the final reading, the audience was invited into the museums’ Calderwood Courtyard for a brief musical performance. Composer, conductor, poet, and pianist Matthew Aucoin ’12 and bass operatic vocalist Davone Tines ’09 presented the night’s finale: two selections from Aucoin’s new opera, “Crossing,” an A.R.T. commission that will premiere at Boston’s Shubert Theatre on May 29. Beneath the courtyard’s glass ceiling, Aucoin struck delicate, ethereal notes on the piano, and Tines’ powerful voice was rich and resonant.

“It’s fun to come back to Harvard,” said Tines. His career as an opera and concert performer takes him to venues around the world, but “as an alumnus, it’s great to know that I’m able to come back here fairly often for arts-related events.”

The roving event took full advantage of the new physical union of the Carpenter Center and the Harvard Art Museums. Architect Renzo Piano connected the two buildings by joining Le Corbusier’s sweeping Carpenter Center ramp with a new one extending from the redesigned museums. Bookended by visual art, the transition between the structures now feels seamless.

“Partnering with groups on campus is an important part of our mission, and we were delighted to join campus arts groups in support of ‘Harvard Voices,’” said Thomas W. Lentz, the Elizabeth and John Moors Cabot Director of the Harvard Art Museums and a member of the Harvard Committee on the Arts. “It was a dynamic reminder of the combined power of Harvard’s visual and performing arts institutions on Quincy Street.”

The timing of “Harvard Voices,” immediately after Beck and Lerman’s earlier Carpenter Center talk, felt like a logical extension of the artists’ discussion. Both have used architecture as a setting for one-of-a-kind performances and installations, and found inspiration among Harvard’s academic resources and intellectual community.

Lerman, a choreographer, performer, writer, educator, and speaker who founded and led Dance Exchange for more than 30 years, staged “Healing Wars: Early Explorations” at the Carpenter Center in 2011, while she was an artist in residence at the University. The site-specific performance of sound, projections, and dance examined the impact of war and trauma.

Beck, an artist in residence at the Carpenter Center through October 2016, is in the midst of presenting “Program,” a sequence of interventions, installations, events, and publications that draws upon the history and aims of the center and the Department of Visual and Environmental Studies to pull the past into the present.

Both the artists’ discussion and “Harvard Voices” were part of the Harvard Committee on the Arts’ larger “John Harvard Projection” series, organized in association with a commission by Krzysztof Wodiczko, a contemporary artist and professor in residence of art, design, and the public domain at Harvard’s Graduate School of Design. Wodiczko’s “John Harvard Projection,” on view evenings from April 20 to 27, is a large-scale installation that animates the John Harvard Statue in Harvard Yard with faces, voices, words, and gestures of Harvard students. Like “Harvard Voices,” as well as Lerman and Beck’s work, Wodiczko’s projection will serve as an example of public art with creative influences that transcend time.