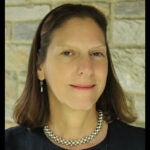 Speaking to an audience at the Harvard Ed Portal, Federico Cortese, senior lecturer on music and director of the Harvard-Radcliffe Orchestra, wondered why Americans have such a unique relationship with Gustav Mahler, the composer who conducted both the Metropolitan Opera and the New York Philharmonic before his death in 1911.

When he came to the United States from his native Italy, Cortese said, “Mahler was at the pinnacle of the pantheon of symphonic music, much more so than Europeans were ready to accept. I can assure you that there is nothing more exciting for students, no matter how advanced, than to play a Mahler symphony. Why Mahler and not, for example, Strauss?”

The phenomenon goes well beyond youthful exuberance, Cortese said during his April 14 lecture, adding that most hunts to hire music directors in America require some experience performing Mahler, almost as a central point of music. “The understanding of Mahler as the defining music composer here in the U.S. is so deeply rooted,” he said. “Why is that?”

At first, Cortese believed it originated in Mahler’s years of work in the United States. After completing his tenure with the Vienna State Opera in 1907, Mahler experienced a meteoric rise in America, with appointments as the conductor of the Metropolitan Opera in 1907 and as director of the New York Philharmonic in 1909.

In Vienna, Mahler had developed a reputation as a passionate, hypersensitive, and demanding leader. “In 10 years in Vienna, he fought with everyone,” Cortese said. “He would work singers to the point of exhaustion. He was hypersensitive and very kind, actually, but very difficult to deal with.”

In America, Mahler was known as a hard-working visionary, one who expected the best of everyone in his company, especially himself.

Cortese noted that, in addition to sometimes displaying anti-Semitism, European audiences could mock Mahler for his sweeping, expressive conducting style. But American audiences of the time embraced it, and that dynamic quality of conducting is accepted throughout the world today.

“The theatrical gestures of Mahler, the rich orchestration — this all appealed to American tastes, so Mahler may seem strangely familiar to American audiences in terms of sound,” he said. “But the fact remains that the love Americans have for Mahler is both generous and not quite clear. We don’t know exactly why it exists. And don’t get me wrong: I love Mahler. But it’s a curious phenomenon.”

Mahler’s apex in America didn’t last. Professional conflicts and a turbulent marriage took a toll on his career and health. After conducting his last concert at Carnegie Hall in February 1911, he returned to Austria, where he died.

One of the most profound factors in America’s embrace of Mahler, Cortese said, may lie with one of Mahler’s greatest champions, Leonard Bernstein.

“I think a lot of it has to do with Bernstein,” Cortese said. “He advocated for Mahler with a passion, and Bernstein turned his passions into missions. If you listen to a recording of Bernstein conducting Mahler’s music, you’ll hear that his interpretation is very personal. The fascinating thing is that, as with all love affairs, there are no clear answers.”

Robert Lue, faculty director of HarvardX and the Ed Portal, and professor of the practice of molecular and cellular biology, said the portal was thrilled to have a conversation with Cortese.

“What is particularly important is the experience that Federico creates in understanding music, in understanding the performance of music and the conducting of music, in collaboration with our students in the Harvard-Radcliffe Orchestra,” Lue said.

Speaking after his lecture, Cortese expressed his thanks for being able to speak directly to members of the Allston and Brighton community at the Harvard Allston Ed Portal.

“The role of any university, but especially an institution like Harvard, can be broad in the sense that it can go from the highest level of research to teaching students, and reaching out to the greater community members who are interested in a variety of subjects. It’s very important. Working with communities like Allston and really reaching out to them — that’s what it’s all about.”