The future of world religions 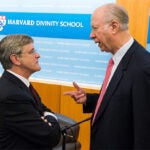 God and the White House

As head of religion research at the “fact tank” Pew Research Center, Alan Cooperman deals heavily in numbers. But he also knows that “numbers seldom tell the whole story,” and that students and scholars at Harvard are the people who can provide invaluable insight and context to his work.

“To tell the whole story, to bring the numbers to life,” he said, “we need — we rely on — the kind of qualitative, sociological, historical, ethical, and theological explorations that are done so ably and with such integrity by the faculty and the students at Harvard Divinity School.”

Cooperman, director of religion research at the nonpartisan Washington, D.C.-based center, spoke at HDS during the Dean’s Leadership Forum on April 17, just two weeks after Pew released a sweeping report, “The Future of World Religions.”

The report details population growth for the world’s major religions through the year 2050. One of the report’s major takeaways is that if current projections of rates in mortality, fertility, religious switching, and other factors hold, the number of Muslims will exceed the number of Christians in fewer than 60 years.

Cooperman said that once Pew researchers, who spent six years working on the report, discovered that the Muslim and Christian populations will reach near numerical parity by 2050, they looked a little further and found the shift. Once the Muslim population eclipses the Christian population around 2070, the population rates for the two groups climb together all the way until the end of the century.

“A greater share of Muslims are young, and a population that starts out young is going to grow faster and is going to have more people entering those prime childbearing years,” he said.

Thirty-four percent of Muslims worldwide are under the age of 15, said Cooperman, compared with 30 percent of Hindus and 27 percent of Christians.

The number of Muslims is expected to grow at twice the rate of the world’s projected population climb because they are concentrated in the areas that are growing fastest, such as sub-Saharan Africa, whereas Christians are spread all across the globe and are expected to grow at the same pace as the anticipated world average. What’s more, the groups with the lowest life expectancy today, like Muslims, will be the groups that see the greatest improvement in life expectancy in the next few decades.

“In a country like the United States, where people are living 79 to 80 years on average, to get each additional year added to life expectancy requires a lot of investment in medical care, whereas in places like sub-Saharan Africa, a little bit of investment, a little bit of improvement, results in a much longer lifetime,” said Cooperman.

While the report’s projections can serve as a valuable tool, Cooperman said that factors such as war and technological advancements can cause its findings to change.

“By trying to peer into the future, we actually can sometimes see with greater clarity what’s happening today,” he said.