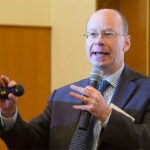 The future of world religions

It’s no secret that the American educational system today lists under the weight of some massive, seemingly intractable burdens such as poor college preparation, modest achievement results compared with other nations, high dropout rates, significant teaching and performance disparities across racial and socioeconomic backgrounds, and a deficit of graduates equipped with the necessary skills for tomorrow’s workforce.

Experts say this crisis is caused by a profound disconnection, whether between different educational levels, between schools and communities, or between education and social institutions. Such disconnections can undermine the nation’s competitiveness, increase social inequality, and diminish well-being and outcomes related to health, income, and even social engagement. It’s an urgent situation, and analysts say fresh educational strategies are urgently needed to address it.

To begin sketching out the task at hand, the Harvard Graduate School of Education (HGSE) held a special Askwith Forum panel last Thursday hosted by Fernando Reimers, Ed.M. ’84, Ed.D. ’88, the Ford Foundation Professor of International Education and director of HGSE’s Global Education and International Education Policy Program, to consider how to make education more relevant, how to get schools to be better at reaching their goals, and whether those goals are, in fact, the appropriate ones.

The talk was part of a multi-day, think tank–style gathering, “Education for the 21st Century,” organized by the Advanced Leadership Initiative (ALI) with faculty from across Harvard, along with national and global experts, educators, and students. Thursday’s panel featured some of Harvard’s top experts in the realms of leadership, strategy and infrastructure, sustainable development, religious pluralism, and public health education, who identified some of the biggest global challenges and offered ideas of what it will take to recalibrate how schools prepare students to face and confront them.

Because the challenges are vast and multifaceted, and involve many stakeholders, education must adapt and enter into the “problem-solving era” where active learning that relates to a student’s community replaces old modes of “received wisdom,” said Rosabeth Moss Kanter, who holds the Ernest L. Arbuckle Professorship at Harvard Business School (HBS) and is the ALI chair and director.

“We need to have education be about solving real problems” so that students “see it leading to something; they’ll feel a sense of efficacy and mastery, and we will be able to tap all this talent and idealism … to solve these big problems,” said Kanter. “After all, they’re going to inherit the Earth; we should engage them now in making it a better place.”

Ensuring sustainability means identifying fundamental core assets like natural capital of air, land, and water; human capital of people’s ability, health, and education; digital and hard infrastructures such as roads and bridges; and intangible capital of social connectedness, institutional trust, and knowledge that must be built up or retained so it is available to future generations, said William Clark, Harvey Brooks Professor of International Science, Public Policy, and Human Development at Harvard Kennedy School (HKS).

Scholars today grapple with questions about “asset management”: “How do we decide what to weigh and which trade-offs are best to make long term?” he asked. To begin, students must learn how to question the status quo, think about how global connectivity produces side effects and unintended consequences that require expansive thinking, and abandon notions of rugged individualism or paralysis in the face of institutional power.

The unprecedented migration of people from one part of the globe to another has prompted urgent questions in many countries, including the United States, about how people should deal with ethnic, racial, cultural, gender, and religious diversity, and the role that education should play.

“The fact that students could go through a whole 12 years of education and not know if an imam was a person, place, or thing is really one of the things that needs to change and has begun to change,” said Harvard Divinity School Professor Diana Eck, who studies religion in India and heads the Pluralism Project, which looks at the religious impact of immigration in the United States. “It’s important to have some knowledge of the religious traditions of the people with whom we share our planet.”

“Pluralism isn’t just diversity. Diversity is a fact across society; pluralism is something we have to achieve,” said Eck. “How do we live together in some positive way with difference? And unless we can solve that problem in various societies, we’re in trouble.”

Given the broad, interdisciplinary nature of public health, as well as the personal and communal effects it has on human well-being, students can always find something to embrace, whether it’s the move toward clean air and water, developing healthy eating habits, or wearing bike helmets.

“Public health is much more than what a doctor does for you in a doctor’s office,” said Howard Koh, professor of the practice of public health leadership and director of the Leading Change Studio at the Harvard T.H. Chan School of Public Health. Koh served as assistant secretary for health in the U.S. Department of Health and Human Services from 2009 to 2014.

Health and education have a direct relationship because public health is ever present. “I like to say health starts where people live, labor, learn, pray, and play,” he said.

But changing American education to confront these difficulties will require a broad coalition and new approaches, the panelists said.

Schools first need to figure out what matters and then help people to develop accompanying skills, said Reimers, who co-chairs the ALI with Kanter. “The instruments that we use to define success for our students and to give them feedback on success are so blunt and so imperfect,” he said, that they don’t tell people much about what will be necessary to help them lead a good life.

Clark said the biggest challenge facing most countries is figuring out which institutional structures will be relevant and effective in the coming decades to assist communal decision-making. “We don’t know how to shape common purpose,” he said. If changes can’t be made through existing institutions, creating new ones will require a rethinking of higher education and its role within the community.

“I’m very struck … by how interested people seem to be in the pluralism, inclusion, diversity — how we build common purpose and one sense of community,” said Kanter. “I’m very struck by that and also very encouraged because … we know this is what we need. More divisiveness and partisanship isn’t going to get us anywhere on these problems.”