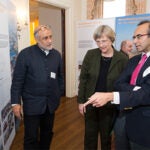 Former Maryland Gov. Martin O’Malley, a possible rival to Hillary Clinton for the Democratic Party nomination for president in 2016, proffered a vision for U.S. economic reform that includes a pathway to citizenship for undocumented immigrants and a $15 national minimum wage during a speech at Harvard Kennedy School (HKS) on Thursday night.

Introduced by Maggie Williams, director of the Institute of Politics at HKS and a former chief of staff and assistant to Hillary Clinton and President Bill Clinton, respectively, O’Malley politely laid out a familiar, populist-themed agenda that focused on middle-class economics, calling for “common-sense choices” that were “not radical, not brash … not unproven” but would move the country toward “the future we prefer.”

O’Malley, 52, endorsed immigration reform not as a tactic to satisfy the political demands of particular voting blocs, but as a matter of sound economic policy.

“The economy isn’t money, the economy is people. It is the work, the imagination, the grit, the desire, the skill, the love of family, the creative capacity of every person that actually drives our economy and makes our country stronger.”

He also called for penalizing and prosecuting those on Wall Street who took irresponsible and unscrupulous risks with the investments of ordinary Americans, reinstating the Glass-Steagall protections undone during the Clinton administration, and breaking up so-called “too big to fail” banks rather than bailing them out or allowing them to water down existing regulatory efforts.

“Explain to me how it is that you can be pulled over for a broken taillight in our country, but if you wreck the world’s economy, you’re somehow untouchable?” O’Malley asked, referencing the motor vehicle stop that resulted in Walter Scott being shot dead by a police officer in North Charleston, S.C., on April 4.

Touting his executive skills as a former city councilor and mayor of Baltimore in the 1990s to early 2000s, O’Malley favorably compared that waterfront city’s economic, educational, and civic turnaround in recent years to Boston’s rebirth. O’Malley, who left the governor’s office in January after serving from 2006 through 2014, was one of the inspirations for Mayor Tommy Carcetti, a fictional character from the acclaimed HBO crime series “The Wire” who rises from city council to mayor and then governor on an ambitious platform of government reform and urban renewal.

Like Clinton, O’Malley said he supports a constitutional amendment to overturn the Supreme Court’s decision in the Citizens United case and to restore campaign finance limits that favor smaller donations as a way to beat back the outsized influence that large donors have on elections.

Despite hiring staff, traveling to early primary states such as Iowa and New Hampshire, and attending fundraisers — including one at a café and wine bar in downtown Boston immediately after his Harvard appearance — O’Malley insisted that he has yet to decide whether to challenge Clinton, but acknowledged that it is something he’s “seriously considering” and will decide on by the end of May.

“It’s a colossal undertaking, and there are many different components of it — organization, policy, personnel. It’s a lot to put together,” he told reporters before his speech. “I’ve never run a bad race, and I don’t intend to start now — if I were to do this.”

He took a mild swipe at Clinton when asked about her recent public declarations in favor of allowing undocumented immigrants to obtain driver’s licenses and for marriage equality to be the federal standard.

“I’m glad Secretary Clinton’s come around to the right positions on these issues,” O’Malley said, touting Maryland’s status as a national leader on the two questions. It was the latest in a string of remarks that political pundits have seized on as oblique criticisms of Clinton, who enjoys a large advantage over would-be competitors in public approval ratings, name recognition, campaign organization, and fundraising.

When a College student asked if O’Malley thought a Hillary Clinton presidency would be able to accomplish his economic vision for America, he paused briefly to much laughter and applause before praising the “very skillfully constructed question” and then sidestepped it, saying “That will be up to the American people.”