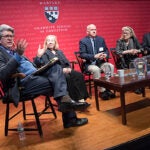 In Kennedy School address, Japanese Prime Minister Abe touts his reformist agenda, says he will continue to push it

Japan’s Prime Minister Shinzo Abe spoke at the Harvard Kennedy School (HKS) today, explaining his efforts to resolve the country’s numerous economic and political challenges. He discussed bolstering relations with the United States, China, India, and Russia, and he boosted more tourism for Tokyo, site of the 2020 Summer Olympics. 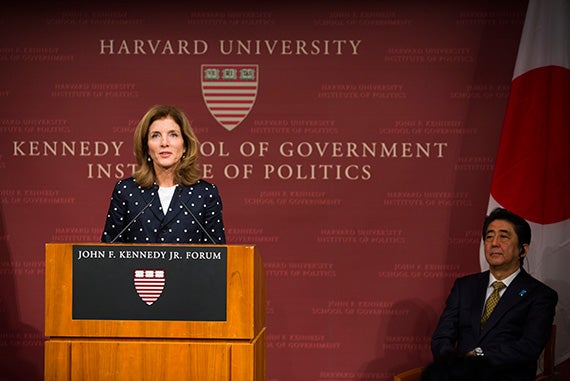 “When my mother and uncles created this institution as a living memorial to my father, they imagined days like this when global leaders, both men and women, would engage students on the critical issues of the day,” and they imagined “that engagement would inspire the students to enter public life, committing themselves to public service,” said Kennedy, who called Abe “a once-in-a-generation leader.”

Abe’s morning stop in Cambridge followed visits to the John F. Kennedy Library in Dorchester and the Boston Marathon bombing site in Boston’s Back Bay. His visit was part of a strategic eight-day state visit to several U.S. cities that will culminate in a speech before a joint session of Congress in Washington, D.C., on Wednesday, the first ever by a Japanese prime minister. The trip comes amid some public criticism of Abe’s handling of contemporary domestic affairs and the country’s treatment of women during World War II.

Pushing ahead with major economic, political, and social reforms, Abe strongly defended his ambitious governmental agenda during a nearly 9-minute address in Japanese to HKS students, faculty, and dignitaries. Acknowledging frequent criticisms from what he called Japan’s “vested interests” and the historic difficulty leaders have in successfully pushing forward more than one or two meaningful reforms, Abe said he’s confident that those who support what he’s doing constitute a “silent majority.”

“I have tenaciously engineered a succession of reforms coming one after another, and I will be fearless going forward. It is because now, more than at any time before, I believe there is in Japan among its people a strong and growing desire to pursue reforms,” Abe said through an English translator. Noting the country’s economic troubles, including prolonged deflation and flagging consumer demand, as well as an aging population that has tilted Japan’s macroeconomic balance, Abe said, “My role in these circumstances is to lead the nation to think of itself again as ‘the little engine that could.’”

Taking inspiration from the notion of “grace under pressure,” Abe said he doesn’t intend to back down from his policies. He called for a “more robust” alliance with the United States through trade deals such as the Trans-Pacific Partnership, and he encouraged more foreign capital investment, steps designed to improve the economy by “changing diehard business habits.”

“Reform never comes without resistance. There will always be pressure from society to suppress it,” he said. “Still, once you have reached a decision after of course having given it much thought, you must carry through on it.”

Security was tight at HKS, as Abe’s address came just days after Japanese police arrested a man suspected of landing a drone carrying traces of radioactive material on the roof of the prime minister’s office building. Abe was out of town at the time of the incident and unharmed. According to reports, the suspect said he was protesting Japan’s nuclear energy policy.

During and after the speech, about two dozen demonstrators stood outside HKS, holding signs that called on Abe to formally apologize for the Japanese government’s role in the sexual enslavement of thousands of women who were forced to work in military brothels as so-called “comfort women” during World War II. Inside, Harvard College sophomore Joseph Lee Choe asked Abe to address the issue.

Abe said, “My heart aches when I think about those people who were victimized by human trafficking and who were subject to immeasurable pain and suffering beyond description,” a feeling “no different” than previous administrations. He said he “upholds” the 1993 Kono Statement on the issue and noted that at the United Nations General Assembly last year, he pledged that Japan would help to lead the international community to fight against sexual trafficking and has contributed $34 million since then to that effort.

The statement was Japan’s first acknowledgment of the coercion of women into military sex camps, and it was a controversial apology that some conservatives want retracted. In 2007, Abe had said he didn’t agree with the statement’s findings and ordered it to be reviewed in 2014, leading some to accuse him of trying to whitewash history in the name of national pride and political advantage. But that review left the statement intact.

In an interview via email after Abe’s speech, Choe said he wasn’t satisfied with the response.

“Yong Soo Lee, a former comfort woman, spoke to a group of Harvard students yesterday about how she was literally dragged from her home and forced into sexual slavery by the Japanese military during World War II,” Choe said. “Hearing her speak and seeing her tears made me empowered to seek justice for her and other former comfort women. What the Japanese government did was horrific, and an apology is the least they can do to give closure to women like Yong Soo Lee.”

When asked about Japan’s relationships with Brazil, Russia, India, and China (the BRIC nations), Abe said he hoped Russia will reach a peaceful agreement with Ukraine, and expressed a strong desire for a peace accord between Japan and Russia, noting the 70 years since the end of World War II.

He was optimistic about strengthening relations with India, saying that he talks frequently with Prime Minister Narendra Modi and that the two countries are eager to expand economic and national security ties.

Concerning China, that country’s rapid development is a “major positive” for Japan and the world, Abe said, but he added that China’s conduct in the South China Sea and East China Sea and its “military display” there concern Japan and other nearby nations. “As a responsible major power in the region, I hope sincerely that it would find a peaceful answer to its challenges,” he said.

Lastly, Abe touched on a favorite theme: bringing more women into the Japanese government and workforce, particularly in leadership roles. He touted a goal he set for government ministries to field at least 30 percent of female candidates for executive positions, a benchmark all have now cleared, he said. Further, while the number of women in the National Diet, or Japanese parliament, is still “very small,” Abe said women hold two of three major party posts. And in the two years since he took office, companies listed on the Tokyo Stock Exchange have doubled the number of female directors from 90 to 180, he said.

Abe said he hopes that companies will build upon that effort, “not because of social policy, but because hiring women would improve the corporate performance,” he said.