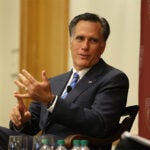 On Sunday, in a sermon at the Memorial Church at Harvard, congregants got an intimate glimpse at how one incident 50 years ago changed race relations in America forever.

“I was there, at a tipping point in history,” recounted the Rev. Clark Olsen, S.T.B. ’59. On the night of March 9, 1965, in Selma, Ala., Olsen witnessed a murder that persuaded a reluctant Congress to pass the landmark Voting Rights Act, signed into law five months later. It barred literacy tests, opened challenges to the practice of poll taxes, and eliminated other traditional Southern impediments to black suffrage.

That March night in Selma, Olsen had just finished dinner with two other Unitarian Universalist ministers, James Reeb and Orloff Miller, both from Boston. All three were white, and had come to town for “Turnaround Tuesday,” an event designed as a peaceful answer to the “Bloody Sunday” march on the Edmund Pettus Bridge two days before. Martin Luther King Jr. had called on clergy from across the country to attend the March 9 protest. More than a thousand appeared — nuns, priests, rabbis, and ministers.

Olsen, then a minister with the Berkeley (Calif.) Fellowship of Unitarian Universalists, had seen graphic television coverage of Bloody Sunday, a mayhem of tear gas, whips, clubs, and charging police horses that wounded scores of protestors and awakened a nation.

After witnessing the violence from his living room, and propelled by a Unitarian tradition of action and advocacy, Olsen answered King’s call (with the aid of airfare from two friends). “It seemed like the right thing to do,” he said.

That Tuesday night, Olsen and his companions were just passing Selma’s Silver Moon Café when three or four men, shouting racial epithets, raced across the darkened street and attacked. From behind, one of them swung a club with full force against the left side of Reeb’s head. Miller dropped to a prayer position ― pacifist training he had received that day. Olsen, late getting to Selma, missed the training. He ran. One of the assailants chased him down and punched him, knocking his glasses into the street.

Reeb, 38 years old and the father of four children, lay in the street babbling incoherently. There was no blood, but his skull was fractured and the internal bleeding was massive. A run of bad luck and bad blood slowed the ambulance ride to a Birmingham hospital 93 miles away: a flat tire, a broken radiotelephone, a car full of harassing white supremacists, and an indifferent state trooper. Early on, at a blacks-only infirmary near the scene of the beating, Olsen held one of Reeb’s hands during his last moments of consciousness. The dying minister “squeezed and squeezed” his friend’s hand as the pain intensified. “Then his hand went limp,” said Olsen.

Reeb’s death 37 hours later, on March 11, set off a chain of protests in U.S. cities and at 80 American embassies overseas. It propelled the United States into a new era of civil rights. It awakened the public to race hate.

Olsen said his friend’s death set in motion dramatic legal changes. He also lamented that the death of a black man three weeks earlier had gone unnoticed in the seats of power. The February death of 26-year-old Alabama church deacon and voting rights activist Jimmie Lee Jackson — shot during a peaceful protest ― did not occasion a single call from or to the White House, said Olsen. But within a few days of Reeb’s demise, President Lyndon Johnson made or received 57 phone calls about the incident.

Of the disparity, Olsen wrote later: “Surely that was a stark lesson about the problem of race in America.” (Jackson’s killing did have an effect on history, however. It inspired the Selma protests that, in turn, changed the world.)

By March 15, during a televised address to a joint session of Congress, LBJ equated Reeb’s death with other turning points in American history, including the battles of Lexington and Concord, and the Confederate surrender at Appomattox that ended the Civil War.

It has been 50 years and one month since Olsen turned around and saw a man swing a club against Reeb’s head. He has told the story hundreds of times to tens of thousands of people. He recounted it in “Murder in Selma,” a 1998 film on CNN. He still feels anger and sadness and guilt about Reeb’s death, and he is abidingly puzzled by the failure of Alabama justice in 1965. (An all-white jury acquitted the perpetrators.) But Olsen has distilled the incident into what he called a message of “justice and love.”

To his listeners in Memorial Church, Olsen offered the central lesson he’d learned as a witness to a pivotal moment in American race relations: “Whenever you see any instance of injustice, stand up,” he said. “Don’t be a silent witness.”

Olsen’s visit was part of a two-day commemoration of Selma, and the Civil Rights era, centered on the 2015 William Belden Noble Lecture by documentary filmmaker Stanley Nelson Jr. Nelson screened his film “Freedom Summer” (2014) in Boylston Hall on Sunday. On Monday at 7 p.m. he’ll deliver the Noble Lecture at the Memorial Church Sanctuary following a conversation with President Drew Faust.

Before his sermon, Olsen participated in an intimate mid-morning Faith and Life Forum in Memorial Church’s Pusey Room. “Being here is a gift to me,” said Olsen, who spent 1955 to 1959 at Harvard, and last preached in Memorial Church as a student 56 years ago.

The conversation revealed the origins of the man who witnessed that murder in Selma, and his lifelong desire to break out of the boxes culture had created for him. He was the boy of 12 who spent six months in bed with rheumatic fever; the boy of 16, sick again, who was not expected to live to be 21. “I was glad to be alive,” Olsen said, a feeling that has stayed vividly with him. “I felt the gift of life, the gift of possibilities.”