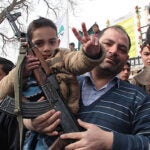 How do we tackle the global health issues of the day? How do we get ahead of the problems that threaten tomorrow? Through engagement and prioritization, said Chelsea Clinton, vice chair of the Clinton Foundation.

On Thursday, in a talk webcast from the Harvard T.H. Chan School of Public Health’s Snyder Auditorium, Clinton, the daughter of former President Bill Clinton and former Secretary of State Hillary Clinton, sat down with Atul Gawande, a professor in the Department of Health Policy and Management at the Harvard T.H. Chan School of Public Health and executive director of Ariadne Labs. The occasion was the presentation of the Next Generation Award, which Clinton, the award’s inaugural recipient, conferred on Blake Mycoskie, founder and “chief shoe giver” of TOMS. Before the presentation, Clinton and Gawande discussed public health challenges, approaches, and priorities.

The award, which was established in 2013 to mark the school’s centennial, honors an individual age 40 or younger whose leadership and commitment to health as a human right inspires young people to make “health for all” a global priority. Mycoskie was recognized for his “one-for-one” business model, in which every product purchased helps a person in need. Mycoskie’s company — which includes TOMS Roasting Co. and the TOMS shoes, eyewear, and recently launched bag collections — has provided 35 million pairs of shoes to children, restored clear vision to more than 300,000 people, provided 70,000 weeks of clean water to developing communities, and is helping mothers around the world safely deliver their babies.

During their 45-minute talk, Clinton and Gawande espoused systemic approaches to public health issues. Starting with her father’s first major public health campaign, to raise awareness and provide treatment for HIV and AIDS, Clinton talked about the utility of partnering with both global governments and corporations. For her own work, fighting childhood obesity, she drew some laughs as she described working with the fast-food giant McDonald’s as well as school systems.

“We’ve needed to engage some unlikely partners,” she acknowledged, to connect with children and their families where and how they eat. The larger goal, reducing the obesity that is leading to health issues worldwide, is “not just … a moral imperative but a security and economic imperative.”

Key, both Gawande and Clinton agreed, is setting up systems that can be shared and replicated. For Clinton that means “to try to be more open-source, to be more transparent, about what we’ve done, about what works at a very granular and practical level so that others can learn.”

“Success,” she said, is “when there’s a transfer of skills, wherewithal, and systematic understanding so that, in the best sense, we’re no longer needed.”

Introducing Mycoskie, Clinton explained how he fits this idea, illustrating with his actions how a “business model — the one-for-one model — is a viable model for achieving social impact.”

For Mycoskie, the sustainability of his business model was key from the start. The entrepreneur talked about how a vacation in Argentina first brought a public health problem to his attention. In Buenos Aires, he said, he saw barefoot children running on the streets, exposed to glass and other debris. He soon became involved in a shoe drive for a local village, where children could not attend school without the shoes that were part of the mandatory uniform. He was there when the donated shoes were delivered and saw the joy they brought. The shoes represented “that someone believed in them, that someone cared about them,” he said. “They would have shoes for the school year that was about to start.”

That, however, led to the question: “Who’s going to give them the next pair?” Instead of asking for more donations, Mycoskie decided that the answer was to start a for-profit company where for every pair sold, one was donated to the needy. Nine years later, TOMS has expanded to cover eyewear and eye care, drinking water, and resources for pregnant mothers and their newborns. He has also opened a shoe factory in Haiti (at Bill Clinton’s urging) and is working to help save the African elephant.

“The simple mission of TOMS is to use business to improve lives,” Mycoskie concluded. “How we do it is our one-to-one model. Why we do it: It’s a real simple desire to care for one another.”