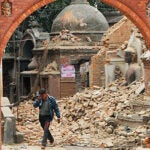 Physician Renee Salas was in a small, two-bed clinic just below the Mount Everest Base Camp on Saturday when a massive, 7.8 magnitude earthquake struck Nepal, crumbling buildings nearby and sending an avalanche through the camp.

Salas, an instructor in emergency medicine at Harvard Medical School, is in the final weeks of a two-year Wilderness Medicine Fellowship at Harvard-affiliated Massachusetts General Hospital. Since last month, she has worked with the Himalayan Rescue Association in Pheriche, a small village in the Khumbu Valley, a six- to eight-hour hike from the base camp, and nearly 14,000 feet above sea level.

The Gazette reached Salas by email today, and she shared her account of the unfolding disaster and the efforts to treat the wounded who streamed in during the days that followed. She described the challenges the medical and rescue teams faced, and the needs Nepal has now.

GAZETTE: Where were you and what were you doing when the quake struck?

SALAS: It was just after noon, and my colleagues and I were in the living space of the Himalayan Rescue Association (HRA) clinic in Pheriche … As the realization set in of the events that were occurring, we ran outside to see nearly all of the buildings of the small village of Pheriche crumbling, at least partly. About a third were completely destroyed.

In the midst of screams and dust clouds, we quickly circled the village after the earthquake vibrations had settled to see if there were any injured. Amazingly, the only injury was one small head laceration. If this disaster had occurred at night, I fear the injury rate would have been much higher. The village came together, as everyone comforted one another and assisted those who had completely lost their houses. Some even began rebuilding their stone walls after the initial waves of aftershocks.

GAZETTE: What did you experience or think at the time?

SALAS: Due to the severity of the damage and the strength of the earthquake we had experienced, we were very concerned that the gravity of the event as a whole was severe. This was my first experience with an earthquake, and the severity of the earth’s movement was astounding. I felt as if I was on a boat at sea. [Our] immediate thoughts and concerns were for the status of the families of the Nepali workers here and to our HRA colleagues in Everest Base Camp and Manang.

Unfortunately, we had few means to gain credible information. We had been without Internet contact for the few preceding days and this remained inoperable. We attempted to reach Everest Base Camp with the radio system we had in place but were also unsuccessful. Through conversations my Nepali friends had with family and the HRA headquarters in Kathmandu, we learned that it had affected the city but had no understanding of the severity. We then began to assess the damage to the clinic, which had thankfully affected only a portion of the living quarters and left the patient treatment area unaffected.

The numerous aftershocks we experienced caused the villagers to remain outside for a good portion of the day. Unfortunately, it was snowing with moderate winds, which made this situation more difficult.

GAZETTE: What have you been doing since?

SALAS: This is exactly the type of situation that my emergency medicine and wilderness medicine training prepared me [for]. The first patients from Everest Base Camp were two climbing Sherpas who arrived about nine hours after the earthquake, as they had immediately descended via foot and by horse.

We saw and treated them — one moderately injured who was admitted overnight and one minor who was treated and released. We began to understand the gravity of what had occurred at EBC [Everett Base Camp] as they recounted their experiences. We initially remained awake, believing that more would be arriving late that evening, but soon retreated to the sunroom (a building across from the clinic) to sleep, given the continued aftershocks.

We were awakened the next morning a little before 6 a.m. to the sounds of helicopter traffic heading up the valley. We received word that they would be evacuating the critically ill and wounded from EBC to our facility and quickly began preparing for the possibility of significant patient volume.

Our clinic has two inpatient beds, one consult room bed, and another extra bed in our research room. Our physician staff includes myself, Andrew Nyberg from the U.S., and Katie Williams from the U.K. Meg Walmsley from Australia, one of the Everest E.R. physicians, descended via helicopter that morning to assist with the large patient influx. Gobi Bashyal, our clinic manager, leapt into action and began making the necessary phone calls to the surrounding areas and country officials to obtain the necessary manpower and helicopters, while Thaneshwar Bhandari, our assistant manager, began assisting us with preparations.

We quickly mobilized the sunroom into a patient facility, and the owner of the Panorama Lodge next door, whose lodge was one of only two that had been unaffected by the quake, graciously donated his dining room. We received approximately 10 critically ill patients first and placed them in the clinic and sunroom — many on makeshift beds placed on the floor. There was a mix of Nepalis and international patients from around the world. Approximately 20 to 30 more suffered major injuries and were unable to ambulate. In total, we saw and evacuated an estimated 73 patients, including many “walking wounded.”

We utilized disaster training and placed large white stickers on patients with their names, injuries, vital signs, and medication administration times. Our resources here included intravenous fluids, medications, and an ultrasound. However, we are a remote post without access to blood products or the ability to perform sub-specialty procedures that many patients required. Luckily the weather cleared, and we were able to arrange further evacuation down to Lukla to the hospital there, which had increased resources. Numerous helicopters, including an MI-17 which could hold 16 to 18 patients, made numerous trips, as all patients were evacuated over a five-hour time period.

The local and international community here in the region came together in a way unlike anything I have experienced. Locals from the village and neighboring town of Dingboche assisted with patient transportation, arranging supplies, and giving patients and volunteers tea and food. International trekkers with non-medical backgrounds who were in the region assisted selflessly with patient transport and donated first aid supplies and materials. We had numerous international physicians, nurses, and EMTs who spontaneously arrived and quickly set to work seeing patients, checking vital signs, and administrating medications. When the last patient was evacuated, the nearly 100 to 200 people who had assisted all cheered and hugged one another for the amazing team effort … and then people dispersed back to their villages, while many international trekkers continued their descent to lower villages.

We have remained open and continue to see locals and trekkers until our job here is done. This will likely be until Everest Base Camp is cleared and then we will convene with our Everest E.R. friends and colleagues and determine the next best course of action. We have shared stories with those descending from Everest Base Camp about their experiences on that fateful day and tried to assist individuals as they try to learn about friends and loved ones. It has still been a very surreal situation that hasn’t truly hit home yet. There have been continued aftershocks that have served as jarring reminders that the danger is still ongoing. Helicopter traffic has been constant between EBC and Pheriche, as climbers from Camps I/II and EBC are being evacuated as well as the bodies of the deceased.

GAZETTE: What do you think is important for the Harvard community to know now about the situation there?

SALAS: Until we had access to Internet yesterday evening, we have been in a vacuum with limited knowledge of the gravity of the situation within the remainder of this amazing country that has become our home for the past two months.

This is a country full of loving people, and the innately welcoming culture has created a collaborative and selfless post-disaster environment here in the Khumbu Valley. However, this a country with very limited resources. We had spent the first week of March in Kathmandu for orientation before our acclimatization trek here, so I know parts of the city well.

The situation in Kathmandu sounds grave, as medical facilities have been quickly overwhelmed, and they have struggled to take care of patients in buildings in the continued wake of aftershocks. The situation in the more remote outlying villages is also unknown. As food and water resources dwindle and the lack of sanitation grows, the risk of epidemics is high, which will turn an already dire situation into a nightmare.

The country will require basic needs such as food/water and medical and infrastructure personnel and supplies. Any assistance, depending on your resources and abilities, would be greatly appreciated, including prayers. Similar to the Haiti earthquake aftermath, which I participated in, this will be a marathon and not a sprint, as further pitfalls lie ahead as we attempt to rebuild this country.