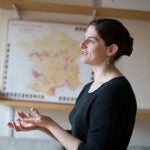 Jay Winsten ratchets up the campaign against distracted driving

In January, a Minnesota court sentenced a National Guardsman to a year in jail after the pickup he was driving killed a mother of two. She had been riding her bicycle, towing her 4-year-old and 1-year-old daughters behind her. He had been processing a bank transaction on his cellphone.

That same month, a Pennsylvania woman was sentenced to two weeks in county prison for hitting a pedestrian, whom she hadn’t seen because she was reading a text message. The impact fractured the pedestrian’s face and collarbone. According to a media report, the case was one of three that day in the same court that sent young mothers to jail for distracted driving.

Society is slowly awakening to the problem of distracted driving, but still is not taking it seriously enough, according to Jay Winsten, associate dean for health communication and Frank Stanton Director of the Center for Health Communication at the Harvard T.H. Chan School of Public Health. Winsten and the center spearheaded the U.S. designated-driver campaign of the late 1980s and early 1990s, which took hold amid growing public opposition to drinking and driving, and which helped to change social norms around the behavior.

Winsten has identified distracted driving as a significant public health problem and a center priority. He is working to understand it, to make it less acceptable through a similar change in social norms, and to craft how to communicate public health messages more effectively in today’s fragmented media market.

The Gazette spoke with Winsten, who last week briefed members of the Massachusetts House on the situation and some possible solutions.

GAZETTE: Can you tell us about the event at the State House last week, and what the main message was?

WINSTEN: The event was hosted by Rep. Cory Atkins, who has introduced legislation to ban the use of handheld devices when behind the wheel. The event was organized by the Harvard T.H. Chan School of Public Health’s Center for Health Communication to provide a briefing for members of the state Legislature and their staffs. We had about 60 people in attendance.

The advantage of a hands-free law is that if the police officer notes that someone is holding the device while driving, then that is per se evidence of the infraction, so they don’t need to go about proving what the driver was doing. It’ll make enforcement easier and the deterrent effect significantly stronger.

GAZETTE: Do you think a hand-held ban would help with distracted driving in Massachusetts?

WINSTEN: On the one hand, it doesn’t address another serious form of distraction, namely, cognitive distraction. So it’s not a panacea. But it would certainly help with enforcement of the texting ban, and would extend the range of that ban. We’re not taking an advocacy position in favor of any particular bill. We’re trying to inform the process on the basis of available research. This legislative briefing was the kickoff of what will be an ongoing series of working luncheons sponsored by the center, most of which will be held back at the School. We’re going to bring together researchers, policymakers, police, district attorneys, and corporate representatives.

GAZETTE: How big a problem is this? What have we done so far to stop it?

WINSTEN: The problem is of tremendous concern. New technology and digital devices have widespread availability, tremendous popularity, and some would even say addictive qualities. It’s certainly a felt need on the part of a lot of people that if they’ve got an incoming message they’ve got to read it right away.

According to federal statistics, there are over 1 million crashes each year attributable to distracted driving, over 400,000 injuries, including a hefty number of life-changing injuries, and a little over 3,000 fatalities a year.

What you see on suburban roads and rural roads is a lot of head-on collisions. It doesn’t take much when you’re separated from the oncoming driver by just a double yellow line. If the cars in each direction are going 50 miles an hour, you’re closing on each other at a combined speed of 100 miles an hour.

It takes 4.6 seconds on average to draft and send a text message. At 50 miles an hour, that’s the equivalent of driving the length of a football field blindfolded. Obviously, no one would ever knowingly do that, but in effect they’re doing it all the time when they’re texting and driving.

It’s tough to regulate because of the rapidity of change in the technology. Forty states have a ban on texting while driving, and 14 also have a ban on handheld devices. But, for example, does that include the Apple watch that was just released? Is that a handheld device?

And [what about] the infotainment systems that are being installed in new cars? Take Tesla, with a 17-inch touchscreen mounted on the dashboard. And Volvo, known for their preoccupation with safety, they’ve got a 9-inch touchscreen with a tremendous array of capabilities.

Volvo has removed almost all of the buttons from the dashboard in its new XC90, and replaced them with functions that you regulate on the touchscreen. That means you have to take one hand off the wheel, you have to take both eyes off the road in order to look to the right at the touchscreen, and you have to work your way through different levels of menu to get to where you want to be.

GAZETTE: Is responsibility shared with automakers and cellphone makers? Who’s at fault here?

WINSTEN: I guess progress is at fault. The rapid evolution of technology created the problem, but will eventually provide the ultimate solution.

General Motors reportedly plans to install tracking devices in 500,000 cars over the next three to five years that will use an array of cameras and algorithms to detect when the driver’s head is turned away from the road for more than a specified amount of time, and will sound an alarm.

Other technologies will monitor and autocorrect when a car drifts out of its lane of traffic. And, in 10 to 20 years, we’ll have driverless cars and will be free to text to our hearts’ content. But the transition period between now and then may well be characterized by an awful lot of carnage on our roadways if we’re not careful.

In the short term, auto manufacturers and manufacturers of these devices and the software that runs them — such as CarPlay from Apple — have shared responsibility. So do the parents of young people who are, like it or not, serving as role models. Their kids are watching.

GAZETTE: What is the role of the Center for Health Communication?

WINSTEN: The role of the center is to both study and directly engage in activities aimed at mobilizing mass communication to influence behavior around disease and injury prevention and to help inform public policy.

In addition to the working luncheons on distracted driving in Massachusetts, we intend to extend what we’re doing to a national audience. At the same time, we’re developing a new media campaign that will be a counterpart to the center’s previous designated-driver campaign.

Over the past several years, there’s been a lot of media activity sponsored by the U.S. Department of Transportation, in collaboration with the Ad Council, and, notably, AT&T Wireless has had its own media initiative, spending $16 million per year on its “It Can Wait” campaign. Those combined efforts have succeeded in strengthening public awareness of the problem, but they’ve not yet had any kind of significant impact on crashes, injuries, or fatalities.

GAZETTE: How do you get it to the next level? Is it going to take some huge tragedy that grabs headlines?

WINSTEN: I don’t even think that would make a difference. Among young people, number one, they believe they’re going to live forever. Number two, 80 percent of young adults tell pollsters that they are better drivers than average — which of course literally can’t be true — and that they are really good at multitasking.

So the communication campaigns are going to have to back up and really explain, so it’s understood in a visceral way, that a driver may be looking straight ahead, but the brain may not process what the eyes are seeing if the driver’s mind is elsewhere. What’s not yet widely understood is that there are three elements to distraction: visual distraction, manual distraction, and cognitive distraction, which may be the most serious of all.

One aspect of cognitive distraction is inattention blindness. A driver may be looking straight ahead when a traffic light turns red and not react to it because the brain’s processing capabilities have been usurped by a phone conversation. The driver is looking but not “seeing” and is not consciously aware of that.

Another aspect of cognitive distraction is tunnel vision, in which the distracted driver’s field of vision becomes constricted so they’re not scanning left and right. If a pedestrian enters a crosswalk, a distracted driver looking straight ahead may not notice it. You have children being struck down on the way to school, in crosswalks in school zones. You’ve got police at road stops having to duck for their lives because of oncoming distracted drivers. Likewise workers in work zones, and motorcyclists are in big trouble.

GAZETTE: How can you reach people with that information?

WINSTEN: Well, it’s tough to break through. We’re talking with NASCAR, for example, about joining our media campaign. We’re hoping to get their top drivers involved. We want to reach young people through YouTube, which already is on board as a partner.

When we started the designated-driver campaign, there were only three TV networks, and if you had relationships with all three, you were in business. Today there’s not only an extreme fragmentation of the media marketplace but a very short attention span on the part of the public.

So, even if you have a breakthrough creative idea that captures a month’s worth of high-profile media attention, that only buys you 30 days. To change social norms is a multi-year process. So the challenge is how do you put together a series of peaks of synchronicity to sustain the effort over time? That’s what we’re going to try to figure out.

It turns out there are some alternatives that provide efficiencies in reaching out to today’s fragmented media universe. For example, there are a small number of firms called multichannel networks, and one of the largest is Fullscreen, co-owned by AT&T Wireless and by Peter Chernin’s group. Peter, the former president and chief operating officer of News Corp., has been a good friend for many years, and he’s helped us to bring Fullscreen on board. Fullscreen represents the creators and developers of 50,000 YouTube channels. And that provides a degree of one-stop shopping for mobilizing widespread support within the new media environment.

We have two goals with the distracted-driving initiative. Number one, we want to prevent injuries and save lives. Simultaneously, our media campaign provides an opportunity to experiment with the development of new sustainable communication strategies for public health and, hopefully, to help reinvent the model of public health communication for the 21st century.