God and the White House 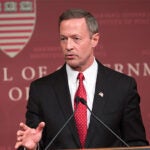 The talk was a centerpiece of the Dean’s Leadership Forum, an annual event that brings together scholars, students, and leaders from Harvard and beyond for discussions on critical issues in religion.

Gergen got his start as a speechwriter in the Nixon White House. He went on to serve in the communications department for Gerald Ford, as director of communications for Ronald Reagan, and as an adviser to Bill Clinton.

Gergen said it was important not to overstate the impact of religion on the decisions of the chief executives for whom he had worked, yet he marveled at the influence that the Rev. Billy Graham has had over presidents since Harry Truman. He detailed Graham’s relationships, strong with Dwight Eisenhower, Lyndon Johnson, and Ronald Reagan, more distant with John F. Kennedy and Bill Clinton, though they valued his counsel. Graham’s most complicated relationship was with Richard Nixon, Gergen said.

“Graham found Nixon tough on the surface, but underneath … he had a compassionate side,” Gergen said. “He tried to work with him, but he was shocked when the Watergate tapes came out. … They never met during the last year of Nixon’s presidency.”

Hempton noted that religion and political partisanship are deeply intertwined in the United States, and asked how these two aspects of American life became so strongly connected.

Gergen said that Christian Evangelicals, disenchanted by prohibitions on prayer in schools and the success of the abortion rights movement, came off of the political sidelines in 1976 to vote for Jimmy Carter, who spoke openly about his faith. When Carter disappointed them with his stance on social issues, however, conservative Christians flocked to Reagan. Gergen pointed to current events to demonstrate their continuing place in the base of the Republican Party.

“I wasn’t surprised when Ted Cruz went to Liberty University,” Gergen said of the recent launch of the Texas U.S. senator’s presidential bid. “Jerry Falwell and Pat Robertson’s influence on the party is still very strong.”

At the same time, Gergen said that social issues are less dominant in U.S. politics than they were even 10 years ago. He noted that Americans have made tremendous shifts in their acceptance of gay and lesbian rights.

“I think it’s terrific,” he said. “But it’s shrunk the influence of the social conservatives and Evangelicals. Republican candidates for president need to get to the middle now. The politics of religion are changing rapidly.”

Gergen, who was deeply involved in an Aspen Institute report on American religious pluralism with former Secretary of State Madeleine Albright, talked about the project’s findings and recommendations. He said that the group explored whether the United States could ever experience the sectarian strife that rages in some parts of the world.

Happily, they concluded that despite occasional tensions like those over the building of a mosque in lower Manhattan, there was little threat of large-scale religious conflict in the short term. Gergen said that it was critical, though, for the United States to act proactively and build a culture that could withstand an event like the terrorist attacks of Sept. 11, 2001.

“Extremism in the Middle East has taken such a virulent form that we have no choice but to be vigilant,” he said. “But we also need to strengthen our commitment to pluralism. We need to do far more with young people, the media, nonprofits, religious organizations, and, at the government level, strengthen understanding and appreciation of one another.”

As the talk moved to religion’s influence on foreign affairs. Gergen said he was deeply disturbed by the current of anti-Semitism rolling through Europe in recent months. He also said that he, like most American diplomats, was taken by surprise by the Arab Spring revolutions of 2011.

“No one could have foreseen that the self-immolation of a street vendor in Tunisia would set off a revolution,” he said, referring to Mohamed Bouazizi’s act of protest.

Gergen expressed concern about the lack of religious literacy among U.S. diplomats and policymakers. Few really understand the differences between, say, Sunni and Shia Muslims, he observed.

“We knew so little about Iraq when we went in,” he said. “That decision reflects the fact that diplomats are, by and large, not well-trained.”

Gergen said that he was most worried about the degree of disorder unfolding globally. He shared an acronym that West Point faculty members use to describe the world their students are inheriting: VUCA — volatile, uncertain, chaos, ambivalence.

He said that the greatest short-term threat to world stability and security was sectarian violence in the Middle East. The greatest long-term threat, however, is how the United States copes with the rise of Asia.

Former Harvard Kennedy School (HKS) Dean Graham Allison “talks about the Thucydides trap,” he said. “The Athenians watched Sparta’s rise with anxiety. When Sparta started to flex its muscles, it led to war that eventually destroyed both states. Allison looked at 19 instances in history where there was a rising world power. In 11 of 12 cases, they went to war.”

With that ground covered, Hempton surrendered to the temptation to ask the longtime presidential adviser the “big question” about the 2016 presidential election: “Who’s going to win?”

Gergen laughed. He said it was hard to pick the next president more than 18 months before the election, and shuddered at the campaign ahead. Then the one-time adviser to George H.W. Bush’s 1980 presidential bid shared a joke.

“I like what California Sen. Dianne Feinstein said recently: ‘I just heard [former Florida Gov.] Jeb Bush is serious about running for president. Now we know what the Bush family really meant when they said no child left behind,” he said.

Hempton closed the conversation by bringing it back to campus. He noted the common efforts of the Divinity School and HKS to make the world a better and less violent place, and asked how the two institutions could best collaborate to advance these goals.

Gergen said that the way forward for the Kennedy School was expanded collaboration with HDS and other Schools at Harvard. He ended with an African proverb that’s a favorite of the staff at the Bill & Melinda Gates Foundation: “If you want to go fast, go alone. If you want to go far, go together.”

In Conversation: Religion in Public Life