Drilling down on corruption 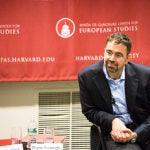 As he concludes lab study of the issue, Lessig reflects on lessons learned, and challenges remaining

When Harvard Law School (HLS) Professor Lawrence Lessig was named director of the Edmond J. Safra Center for Ethics in 2008, he said he would create a limited-time project to research the problem of institutional corruption in the United States. He launched that project, the Edmund J. Safra Research Lab, in 2010, as a five-year effort to study the issue and come up with tools to understand it and respond to it better.

On Friday and Saturday, a two-day conference called “Ending Institutional Corruption” will mark the end of that project, with dozens of speakers from academia, law, government, media, mind sciences, and citizen groups discussing the topic. The conference is free and open to the public, but registration is required.

In addition to concluding the lab, Lessig is stepping down as the center’s director. (He will be succeeded by Danielle S. Allen, who has been appointed to the Faculty of Arts and Sciences as a professor in the Government Department.) Lessig, author of the 2012 book “Republic, Lost,” which addressed congressional corruption, will continue teaching at HLS as the Roy L. Furman Professor of Law and Leadership.

He also will remain active in the Mayday PAC, which he launched last year with the goal of reducing money’s influence on politics and government. Harvard Law Today spoke with Lessig recently about the lab and his future plans.

HARVARD LAW TODAY: What were your specific goals when you set up the lab?

LESSIG: I think the most important goal was to create an awareness of the kind of corruption that people are likely to miss or not think of as corruption. You can have an institution filled with totally non-corrupt people, but the institution itself has become corrupted because it’s opened itself to inferences that undermine its purpose or undermine the public trust in the institution. That’s the dynamic of corruption we’re trying to make salient, and to think about in a wide range of contexts, from the academy to scientific research, to the way courts function, to the way Congress functions, to any institution in principle that could be subject to this kind of corruption. We’re trying to find a way to understand it and respond to it.

HARVARD LAW TODAY: Was the creation of the lab connected to the work you were doing in researching and writing “Republic, Lost”?

LESSIG: I think of the lab as applying the problem that I wrote about with Congress to a wide range of institutions. Congress, I think, is a paradigmatic example of a corrupted institution, in the sense that it’s not necessarily filled with any criminals, but it’s become so focused on the objective of raising money to fund its campaigns that that dependency conflicts with the intended dependence — on people generally, and not on the funders of campaigns. That’s the dynamic I call dependence corruption, which is a perfect instance of this example of institutional corruption more generally.

HARVARD LAW TODAY: To what extent do you think you’ve been successful in raising this awareness?

LESSIG: It’s been incredibly successful in giving people an idea of this different sense of corruption and opening up a bunch of different research around it. Also, I think it’s been successful in just offering a vocabulary that has given people a way to talk about this without making it personal. If you talk about corruption, people’s immediate reaction is, “I’m not corrupt,” and the response should be, “I’m not talking about you; I’m talking about this institution and the way this institution is being defeated in its objectives.” I think that has turned out to be a really powerful way to think about a bunch of different institutions and the problems they face.

HARVARD LAW TODAY: What’s your assessment of Mayday PAC after its first year of operation?

LESSIG: Mayday PAC was an experiment, and remains an experiment, about ways that we can intervene to bring about a change in Congress to address this issue. We did one version of that experiment last year, and we’re launching another one this May 1 and will continue to experiment with ways until we find one that works.

We were involved in eight races [in the 2014 mid-term elections], successful only in two. We were testing whether we could make this issue salient in the context of a partisan election. We could see a move to the ball, that people were much more focused on this issue than they were in other districts, but not enough to change things in a partisan fight. So that sent us back to thinking about other ways to address this issue.

HARVARD LAW TODAY: So what happens May 1?

LESSIG: We’re basically engaged in a pretty massive citizen lobby campaign to recruit members [of Congress] to co-sponsor reform. So it’s not about engaging political campaigns; it’s about trying to close the gap between the majority and the number who are committed to reform. The idea is that makes it easier to imagine actually winning when it comes to 2016.

HARVARD LAW TODAY: Do you have any more books in the works?

LESSIG: I gave a series of lectures at the University of Chicago last year that were on the subject of institutional corruption. The title was “America: Compromised,” and I’m publishing a book of those at the end of the summer. And there’s a version two of “Republic, Lost,” that will be coming out in January.