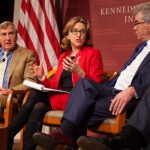 Former secretary of state concentrated on knowing her opponents, and what they wanted

The value of a clear understanding of your country’s objectives and the power of personal relationships — along with the wisdom of not drinking too much lemonade — were among the insights former U.S. Secretary of State Madeleine Albright shared with a Harvard audience Thursday.

Albright was a guest of the American Secretaries of State Project, a joint effort by the Harvard Kennedy School’s (HKS) Future of Diplomacy Project and the Program on Negotiation. She was joined on stage by the project’s three faculty directors: Nicholas Burns, professor of the practice of diplomacy and international politics at HKS; Robert Mnookin, Samuel Williston Professor of Law at Harvard Law School (HLS); and James Sebenius, Gordon Donaldson Professor of Business Administration at Harvard Business School (HBS). The three faculty members co-teach the “Great Negotiators, Effective Diplomacy, and Intractable Conflicts” class, and their students were in the audience and able to press Albright further on key points.

While introducing the panel, HBS Dean Nitin Nohria said the project is a perfect example of the One Harvard philosophy, aimed at bringing together the University’s various Schools and communities.

The program at HBS’s Spangler Center, which ran for more than three hours, focused on Albright’s negotiations around key foreign policy issues, including the conflicts in the Balkans, relationships with Russia and China, attempts to reach a peace settlement between Israel and the Palestinians, and efforts to secure a deal with North Korea over its nuclear weapons program.

Throughout, Albright returned to the importance of establishing personal relationships with her counterparts and using personal elements carefully to ease the heavy mechanisms of international diplomacy. To attain an objective, she said, it was indispensable to have a clear understanding of what the other side wanted out of negotiations. But it was also invaluable to understand the person on the other side of the table. “You don’t have to like everybody, but you have to learn what makes them tick,” she said.

She talked about how her relationship with Russian Foreign Minister Yevgeny Primakov was helped by a duet they performed at an ASEAN diplomatic conference. But as the first female U.S. secretary of state, Albright said she felt that sometimes men, such as Serbian and Yugoslav leader Slobodan Milošević, believed they could establish that relationship through charm alone. It was not a good tactic. “I ultimately came to be known as not being a pushover,” she said dryly.

Albright talked about the efforts made during her tenure to manage the United States’ relationship with Russia, and the great efforts made to respect that nation as it dealt with the consequences of its declining power in the ’90s.

The United States made a large mistake by saying it had won the Cold War, implicitly painting the Russians as the losers, Albright reflected. “They felt like Bangladesh with missiles,” Albright said, repeating a striking phrase she once heard uttered by a Russian man interviewed not long after the breakup of the Soviet Union. The world is, in a way, now dealing with the consequences of that, she said.

Albright also revisited negotiations between Israelis and Palestinians. She mourned the lack of political will by those countries’ leaders to create the conditions for a lasting peace, which many observers thought was almost reached at the Camp David talks in 2000. But she also regaled the audience with tales of moody negotiators, holed up in rooms and asking for sightseeing trips to Civil War sights.

The oddness of the negotiations was summed up by her experience with former Syrian President Hafez al-Assad. She had been warned by her predecessors of Assad’s use of “bladder diplomacy.” He would constantly offer tea and lemonade during negotiations, hoping the other side would call for a bathroom break and therefore lose face. Albright politely declined any beverage, she said, and won that small battle.

Albright was the fourth U.S. secretary of state to speak to the project, after Henry Kissinger, George Shultz, and James Baker III. Colin Powell, Condoleezza Rice, and Hillary Clinton have also committed to participate.

“The most important thing we can do as academics is to be rigorous in learning the lessons and then trying to make sense of those lessons for students and future generations,” Burns said. “I think that’s the great value of this project.”