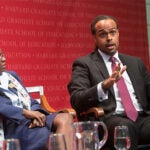 Every 12 years, where the Ganges meets the Yamuna River in Allahabad, India, a city of millions appears, made entirely of just six things: canvas, corrugated metal, bamboo, nails, screws, and rope.

It is a massive undertaking, one whose impermanence is underlined by the fact that the site is inaccessible just months before, claimed by the river during monsoon floods, and dismantled shortly after.

The city is the site of the Kumbh Mela, a Hindu religious festival at which millions of pilgrims bathe at the confluence of two physical rivers, the Ganges and the Yamuna, and one spiritual one, the Saraswati.

At the last Kumbh Mela, in 2013, among the pilgrims was a team of some 50 people — faculty, students, and researchers — from Harvard. The team was making an in-depth study of a gathering that is not only a remarkable religious experience, but also a remarkable exercise in urban planning, public health, government administration, security, and commerce.

On Thursday, the Harvard Kumbh Mela team gathered at Loeb House to reflect on the experience and to launch a book on their findings, “Kumbh Mela: Mapping the Ephemeral Megacity,” as well as an exhibition by the same name.

Tarun Khanna, the Jorge Paulo Lemann Professor at Harvard Business School and director of the South Asia Institute, which sponsored the Harvard investigation, said he was struck by the general feeling of happiness and peace at the Kumbh, despite having so many people jammed into one place.

Khanna, born in India, set aside his professorial mien when he took his parents to the festival and took a ritual bath in the river water. His experience was echoed by others who were touched in different ways, even as they conducted their research.

“I can’t say it was clean,” Khanna said of the dip in the river. “It was clearly not clean. But people lost themselves in the moment. I just loved it. Loved it.”

Harvard President Drew Faust hailed the effort as an example of interdisciplinary collaboration and the cooperative spirit embodied in the University’s emphasis on One Harvard. So many of today’s most intractable — and most interesting — problems, she said, are complex and require the insight and expertise of people in several different fields. The Harvard team at Kumbh Mela included faculty and students from the Divinity School, the Graduate School of Design, the T.H. Chan School of Public Health, the Business School, and the Faculty of Arts and Sciences.

Harvard’s efforts, Faust said, made the temporary city a permanent addition to our body of knowledge and, in addition, gave her an answer to several common questions people ask about Harvard.

The Thursday event featured a panel discussion by faculty leaders on the project: Khanna; Professor of Comparative Religion and Indian Studies and Frederic Wertham Professor of Law and Psychiatry in Society Diana Eck; Professor of Urban Design and Planning Rahul Mehrotra; and François-Xavier Bagnoud Professor of the Practice of Health and Human Rights Jennifer Leaning.

During the Kumbh Mela, the Harvard teams fanned out, exploring different aspects of the megacity, from religious practices to public health to environmental impacts. They brought the data back with them and have been analyzing and publishing the results since. The exhibition, whose descriptions and large, striking images are displayed on collapsible frames, was created in the spirit of the city it describes, Mehrotra said. It was designed to be stored in six boxes and will travel for the next couple of years, he said.

A lot of work remains, panelists said. A key area of exploration, Mehrotra said, involves the inclination of problem-solvers to seek permanent solutions to what may be temporary problems. Mehrotra said the research is continuing, looking at other types of temporary gatherings, from the celebratory, like Nevada’s Burning Man, to those of refuge, as in camps for the displaced.

“There are many lessons,” Mehrotra said. “We’re just beginning this research.”