The Crimson in Seattle 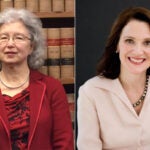 Karen Moore to lead Board of Overseers

Area alumni connect with the city and each other

Harvard President Drew Faust shared Kacyvenski’s story before 250 alumni and friends during her opening remarks recently at Your Harvard: Seattle at the Seattle Art Museum. The Your Harvard events comprise a global series organized by the Harvard Alumni Association (HAA) that will occur throughout The Harvard Campaign.

After starring as a linebacker for the Crimson, Kacyvenski was drafted by the National Football League’s Seattle Seahawks in 2000 and called the Emerald City home for the majority of his professional career. In Seattle, Faust says, Kacyvenski “discovered an unassuming metropolis ‘full of great minds and great people,’ a community that celebrated and rewarded ‘hard work, passion, and heart.’”

Kacyvenski was hardly the first recent graduate of Harvard to call Seattle home. The city and the rest of the Pacific Northwest are increasingly popular destinations for young Harvard alumni, with more than 5,000 of them in the Puget Sound and Western Washington region alone.

Alumni gatherings in Seattle date back to 1892, when a local group of alumni invited Harvard President Charles William Eliot to visit. The current Harvard Club of Seattle has operated since 1974.

Originally from Scarsdale, N.Y., Andrew Petschek ’12 refers to Harvard as his second home. Soon after graduation, Petschek found a third home when he moved to Seattle to work for Microsoft. “I didn’t know anyone when I came out here,” he said. “I naturally gravitated to those who had a shared … Harvard experience, because we all took part in that, the love and joy of Cambridge. My very positive past experience has been reincarnated out here.”

Like Petschek, other Harvard alumni were drawn to Seattle to work for major brands based in the area, including Microsoft, Amazon, Starbucks, Nordstrom, and Boeing, among others.

A Nebraska native, Tiffany Thalassa Niver ’08, M.B.A. ’12, worked in Boston before moving to Seattle to work for Amazon. Niver credits the Harvard alumni clubs in both cities for their efforts to replicate the intellectual conversations and the networking opportunities that are part of the fabric of Harvard life. “What’s unique about Seattle is, because Seattle’s a smaller community much further away from the core, you really get to know people on a deeper level,” she said.

Sean Meeker ’03 and his wife, Bryce Meeker ’03, left New York City just over a year ago to be closer to family in Seattle. While he hasn’t lived in Seattle long, Meeker, a portfolio manager at Vulcan Capital, can already differentiate between the Harvard alumni community in New York and its counterpart in Seattle. Due to both the way of life and the larger contingent of alumni in New York, the alumni network there has to be more structured, Meeker said, whereas in Seattle, “maybe not shockingly for the West Coast culture, it’s a little more relaxed.” He describes the Seattle alumni group as a vibrant community with particular benefits for younger alumni. Regarding alumni events such as Your Harvard: Seattle, Meeker added, “If you go to one of those events for five minutes, you’re going to have an email list 10 to 15 people long. You’re going to come away with a passion about a lot of things you didn’t know about before.”

A number of younger alumni turned out for the Your Harvard event, which they attributed to having a peer, Ling Lin ’12, as president of the Harvard Club of Seattle. Lin, who grew up in Boston and moved to Seattle to work for Amazon soon after graduating, said she became involved with the Seattle club because she didn’t want to lose the close connection she felt with her Harvard peers. She equates Harvard with opportunity, which she continues to see play out in her role as club president. “Any new ideas I had for the club have been very positively received.”

James Carter ’01 traveled to the event from his home in Portland, where he works as a financial analyst for the city. He credits Lin’s leadership in adding more recent graduate representation to the club’s board as well as the diversity of events that the club sponsors to encourage alumni of various ages to engage more as a community.

Sonia Dara ’12 echoed Carter’s praise of Lin’s efforts to increase the involvement of young alumni in Seattle. Originally from Atlanta, Dara relocated to Seattle after Commencement to work for Microsoft. Moving to the Northwest, she said, was an opportunity to go outside her comfort zone, having always lived on the East Coast and not really knowing anyone in her new city. “I equate living in Seattle to being in part of the Quad. You’re further away from the concentration of everyone, which makes your ties a little bit stronger to one another — your House pride, if you will. That’s why we have a lot of Seattle pride.”

“It’s wonderful to see the number of young alumni not only active in the Harvard Club of Seattle but also attracting other alumni to get involved,” said Philip Lovejoy, executive director of the HAA. “There’s a genuine sense of connection among the young graduates in Seattle, something we are starting to see more of in many other Harvard communities as well.”