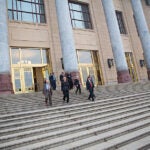 New models are being tested and used to harness potential of digital age, speaker says

Just as Amazon has gone from selling books to exploring package delivery by drone, higher education in the digital age is radically rethinking the models by which it delivers its content, the leader of a higher education technology association told a Harvard Graduate School of Education (HGSE) audience on Wednesday.

The upshot is that more and more people across the world will be engaged by education in ways previously unimagined, said Diana Oblinger, president and CEO of EDUCAUSE, and a Dean’s Distinguished Visiting Fellow at the School.

“It’s higher education in the connected age, where we can connect with anyone and anything, anytime,” she said.

Oblinger spoke on “The Digital Ecosystem and Higher Education’s Future” as part of the Askwith Forum series at the School. Joining her at Longfellow Hall to discuss the issue was Christopher Dede, Timothy E. Wirth Professor in Learning Technologies at HGSE.

Oblinger launched the Next Generation Learning Challenges program, which, with the support of such organizations as the Bill & Melinda Gates Foundation and the Hewlett Foundation, has awarded nearly $55 million in grants toward applied technology in schools to boost college readiness. She most recently edited “Game Changers: Education and Information Technologies,” which spotlights the ways in which new educational models made possible by advances in technology enable more learners to be reached, with greater impact.

At the Askwith Forum, Oblinger described the technology-driven revolution that is transforming college.

She cited a new application called zSpace, a desktop virtual-reality platform with stylus and eyewear, which turns using a computer into a 3-D exercise. “If you were studying anatomy, you could look at [2-D] images or have this immersive experience,” she said. “Which one do you think is the more engaging?”

New simulation- or gamelike learning spaces — echoing the SimCity video game — will deepen learning by placing students in complex environments in which they can track data while interacting with others, she said. In the “digital ecosystem” of the future, she said, expect to see “more and more of these gaming environments — probably more accurately termed ‘experiential learning spaces’ — because they do situate you in a very immersive, engaging kind of experience.”

Oblinger drew on the Amazon analogy to describe the “radically different” alternative models that are changing assumptions of how education is delivered.

She cited the new Minerva Project, which offers a liberal arts education to students using an online learning platform. The for-profit venture aims to offer an accredited education at the relatively low cost of $10,000 a year, admitting all students who qualify. “Rather than having the campus experience, students are buying into the notion that they will have a global experience,” she said.

She spoke of working learners, or “plate-spinners,” who juggle work and children and need education for their life and job, and who constitute a market three times as large as the traditional post-secondary education market.

College for America, a branch of Southern New Hampshire University, was designed to serve people who are working on factory floors or in entry-level corporate jobs, she said. Under this model, she said, the college recruits not students but employers, who buy seats for their workers. Teaching is done at the workplace, with coaches. The pricing is $2,500 for “all you can eat” in a certain period of time.

“The first graduate of this program was a guy who was older, a factory worker in a Slim Jim plant,” she said. “He received his associate’s degree by working really, really hard for three months. That’s an affordable education for someone we might not ever have been able to reach with some other programs.” The employer, meanwhile, creates “a workplace that’s full of opportunity rather than one that has a revolving door.”

She also touched on MOOCs, or massive open online courses, describing a master’s program in computer science offered by Georgia Tech as “an interesting marriage between massive and intensive.” The master’s program, offered for $7,000 with an open-admission policy for anyone qualified, currently has 2,300 students, many of them “very impressive” and doing work in artificial intelligence and other innovative fields. The student-teacher ratio is 200-1, “so they have a lot of T.A.s,” she said. “The real action is in problem-solving and mentored learning.”

In the “changing ecosystem of higher education,” Oblinger said, “it’s not either/or. There are a lot of different niches where different kinds of programs are emerging.”

Oblinger was asked to predict how the higher ed “digital ecosystem” might look in a decade.

“I think it will be a highly immersive environment,” she said. “The place where I put the emphasis would be on the connectedness of the environment. ‘In class’ is being connected to ‘out of class,’ the physical to the virtual, the student who is in school to someone who is out of school. Literally anything and everything is connected.

“It’s not just about digital. We are all present, and you’ve got millions of minds in the world. It’s higher education in the connected age, where we can connect with anyone and anything, anytime, for different purposes,” she said. “If we’re smart about how to marry the digital with the best of what we do face-to-face, education will move to a new level for everyone.”