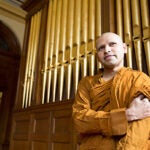 Former New York Times editor teaches her craft at Harvard, where she learned its rudiments

Jill Abramson, former executive editor of The New York Times, returned to Harvard last fall as a visiting lecturer in the Department of English. Here, she recounts her transition back to where her news career started.

Some days, walking through the Barker Center, my new professional home, I’m not sure whether I am 20 or 60. When I get a latte in the cafe, where students tap happily on their devices or listen silently to their streaming songs, I suddenly feel like a timid freshman, carrying my plastic tray in what was then the freshman union, looking for a friendly face to sit by.

I teach my “Introduction to Journalism” creative writing seminar just steps away from where I wrote my first articles for publication, in the Harvard Independent, which was on the top floor of the union. I can practically hear Alison Mitchell, my editor, complaining that my review of Robert Altman’s masterpiece, the movie “Nashville,” has to be cut by 200 words.

So what is it like, after a long, fruitful, and sometimes tumultuous career at The Wall Street Journal and The New York Times, to be back at Harvard?

It’s heaven. What better salve for a battle-scarred reporter and editor than to be reminded of what made me fall in love with journalism in the first place. How wonderful to share the reportorial rigor of Isabel Wilkerson or the splendor of Gay Talese’s writing with a dozen of the brightest students in the world. How delightful to invite author Ron Suskind, a former Journal colleague, to class and spend two hours listening to him spill the secret to making a narrative gripping.

But even as Professor Abramson attempts to speak with authority about making the decision to publish the Snowden documents in the Times, the insecure girl with the tray is never that far from my consciousness.

I fell in love with journalism and the power of the press to change the world during that freshman year, 1972-73. I spent that spring reading period studying for exams next to a transistor radio playing the live Watergate hearings. I used to walk to Nini’s Corner, still the Harvard Square newsstand but now under newer management, to buy three-day-old copies of The Washington Post, so I could read the articles by Bob Woodward and Carl Bernstein that would lead to the resignation of President Richard Nixon the following year.

I saw my first Preston Sturges movie in the Quincy House dining room. I got dumped by my first boyfriend and thought I’d crumple from heartbreak. I changed majors, no longer certain I was destined to be a medievalist. I had a role in my first play, a Kirkland House production of Noel Coward’s “Hay Fever,” and got panned in the Harvard Crimson. (One of my students gleefully searched for and found the mean review on his laptop during class after I made the mistake of mentioning it.) I met my husband. He was the cute guy playing Cole Porter tunes in the K House Junior Common Room between the acts.

Busing had inflamed racial tensions in Boston. I did my first difficult digging while I was reporting on that story. I covered crowded rallies for George Wallace, the symbol of white power as the former segregationist governor of Alabama, at the Boston Garden and other locations. Although I was naturally shy, I found that I liked asking strangers what they thought about fraught matters and accurately reporting what they said.

Harvard could feel removed and isolated from the roiling news about Nixon or busing. But during my sophomore year, school and the news collided strangely and memorably. I was watching the nightly news (my roommate had a TV) with a friend. The anchor reported that the heiress Patricia Hearst had been kidnapped. My friend started screaming. It turned out she had gone to an all-girls boarding school with Hearst in San Francisco. They had come out as debutantes together. Now I was trekking to Nini’s Corner to grab copies of Rolling Stone, the publication that published the definitive investigations of Hearst’s life on the run as the fugitive known as Tania. (A couple of years after graduation, and soon after Hearst received a presidential pardon, she and I were both bridesmaids in my friend’s wedding to one of our Harvard classmates.)

Through a family friend who worked in Time magazine’s Boston bureau, I got a job as a campus stringer, covering snippets of Harvard news. I called Professor John Kenneth Galbraith periodically to ask him if the West was in decline. Time co-founder Henry Luce had an endless appetite for this subject, and Galbraith was always one of the Harvard names worth quoting. (He usually answered that Western values were pretty secure, though the economy was rocky.) I covered celebrities like John Wayne and Cybill Shepherd when they visited Harvard. The reporting stint for Time gave me my journalism launch, which turned into my career for life.

Just as I had been one of the first women to live in Harvard Yard in 1972, my career in journalism had a lot of firsts. I was the first woman to become Washington bureau chief, managing editor, and executive editor at The New York Times. I had a great run there, until I was abruptly fired last spring, an experience that was hard but only reinforced my love of reporting and writing.

So now I get to teach my love of journalism as I again produce long pieces myself. (I’m also involved in a digital journalism startup focused on long-form narrative.) I split my week between Cambridge and New York. When I’m at a Harvard, I stay with my daughter, a surgeon who graduated from Harvard in ’05.

Just as I tried to jump-start my career as a journalist while I was a student at Harvard, I’m helping some of my students get summer internships and their first jobs, since many of them are seniors. They seem to love the news as much as I do. I can’t wait to read the stories they break.