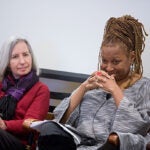 After Ferguson, the ripples across Harvard

It’s been just a year since Thomas Piketty’s “Capital in the Twenty-First Century” turned the respected French economist from the University of Paris into an academic and publishing rock star. Few could have imagined that a nearly 700-page text tracing wealth and income-distribution patterns in 20 countries as far back as the French Revolution would become a worldwide million-plus seller.

Harvard University Press (HUP) released the English translation — done by Arthur Goldhammer, co-chair of the Contemporary Europe Study Group and chair of the Visiting Scholars Seminar at the Minda de Gunzburg Center for European Studies (CES) — in March 2014. Already, it is the second-biggest seller in the publisher’s 102-year history.

Piketty’s status showed little sign of fading during his March 6 visit to Harvard to speak about the book before an overflow crowd inside Austin Hall at Harvard Law School (HLS). He focused on three key points from his groundbreaking research: the trends of income inequality dynamics in countries, including the United States, using tax records from the last 100 to 200 years; the return of very high wealth-income ratios in countries with low economic growth; and that as the net-of-tax rate of return, or r, continues to outpace the growth rate, or g, future wealth-inequality levels may reach or surpass those of the 19th century.

Piketty joined 40 faculty and students from the Political Economy of Modern Capitalism Workshop for a discussion at a private luncheon held earlier in the day at the Harvard Faculty Club, where he talked expansively, touching on the book’s widely critiqued equation for explaining growing income inequality.

“First, about r > g. To me, this was more like a marketing trick — and apparently it worked,” he joked. “Look, I don’t seriously believe that you can explain everything in three centuries of the history of income and wealth in 20 countries with one equation. If I really believed this, the book would be 10 pages long.”

The workshop, co-led by Beckert and Desan, is a long-running research seminar under Harvard’s Program on the Study of Capitalism. It draws students and faculty working in an array of fields — including history, economics, law, government, business, sociology, and anthropology — who take a multidisciplinary approach to the study of capitalism.

It’s a method Piketty supports. “I think the boundaries between economics and history and sociology are much less clear than economists have tried to pretend,” he said.

Despite near-universal acclaim from many left-leaning economists, some critics, including The Financial Times, Bill Gates, and others, have challenged the precision of Piketty’s data, and the effectiveness and practicality of his proposal to institute a global wealth tax. The tax would increase on a sliding scale from 0.1 to 0.5 percent on wealth less than €1 million to 10 percent on wealth of several hundred million and up.

Such a tax, Piketty writes, would “contain the unlimited growth of global inequality of wealth, which is currently increasing at a rate that cannot be sustained in the long run and that ought to worry even the most fervent champions of the self-regulated market.”

“Many of the critiques of the deficiencies that have been pointed out, I very much agree with them. I think there are strong limitations to this book,” he said during the luncheon. “But I try to take a global perspective of the distribution of income and wealth over the past three centuries, so of course there’s no way you can do that in just one book. This is at best an introduction to a history of capital and wealth and income since the Industrial Revolution, and there are many issues which are clearly not covered as much as they should [be].”

Piketty said the data show that the sustained power of inherited wealth through history undercuts widely held beliefs of meritocracy and productivity often used by the rich to explain why they have more.

“What’s important is not to take for granted the claims that meritocracy is working,” he said. “In every country, including the United States, including France, of course, as well, you have very strong theoretical claims about the merits about the national educational model as a way to promote” upward mobility.

“So should we tax the endowment of Harvard? I don’t know,” said Piketty. “I care about education more than taxation. I care about taxation as a way to finance education and other public good, but in the end, I think the issue of equal access to higher education is a bit more important.”

Beckert said that the book gets at the heart of the complexities bound up in capitalism.

“In some ways it’s a pessimistic reading both of the long history of capitalism and also of the contemporary state that we are entering, and it’s sometimes a frightening reading of how we might continue to evolve in the direction of ever-greater inequality and what that means for democracy and for politics more broadly,” Beckert said of “Capital.”

“But on the other hand, what I appreciate about him so much, and I think that’s also the case for students, is that he opens up a space to discuss these matters and also he insists on the importance of politics. That we can shape the world in which we live, we’re not just victims of a kind of large, historical process about which we cannot do anything.”

Piketty’s visit was sponsored by the Minda de Gunzburg Center for European Studies; the CES Seminar on Social Exclusion and Inclusion; the Cultural Services of the French Embassy in the U.S.; Program on the Study of Capitalism; the Charles Warren Center for Studies of American History; and the Institute for Global Law and Policy at HLS.