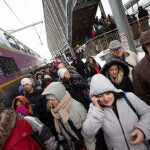 Dutch sociologist to lecture on the forces behind mass killings

What makes an armed man kill an unarmed civilian? What makes him join the killing of many hundreds — or hundreds of thousands — of civilians?

University of Amsterdam Professor of Social Science Emeritus Abram de Swaan takes a hard look at the subject in his new book, “The Killing Compartments: The Mentality of Mass Murder.” History is appallingly dense with examples, from medieval warfare to Nazi Germany to Stalin’s purges to Rwanda in the 1990s.

De Swaan talked with the Gazette ahead of a Tuesday lecture at the Minda de Gunzburg Center for European Studies.

GAZETTE: You point out that genocide did not arise in the 20th century. Has it been with us always?

DE SWAAN: I’m afraid so. I avoid the term “genocide” because it has a very precise but rather problematic legal definition. I use “mass violence” for very large-scale, asymmetric encounters between organized and armed men — it’s usually men — and organized and unarmed other people.

In many times and places, a victorious army would routinely kill off whoever it could get ahold of, rape the women, enslave people, burn. Until, say, the 15th or 16th century, the chroniclers exaggerate the amount of bloodshed with glee and pride in what their army has accomplished and how much carnage was [done] in honor of the king or the great leader.

What is modern about genocide or about mass violence is the embarrassment about it.

GAZETTE: So it is not the practice that has changed, but our interpretation of it?

DE SWAAN: You could say that the scale has increased, with the emergence of a state system in which states are an enormous accumulation of the means of violence, including huge nuclear stockpiles. Internally, there is a domestic pacification, relative peace within every state territory, and so the overall figures for homicide, etc., decline in the course of centuries. This has been known by people in the profession for quite some time, and [Steven] Pinker in “The Better Angels [of Our Nature]” has popularized that insight. On the other hand, violence between states becomes ever more lethal and destructive on an ever-larger scale, but it happens more rarely.

Once war starts, victorious soldiers often regress into a state of triumphant rage and go on a rampage. The My Lai massacre [of the Vietnam War] is a classic example of what happens all the time in guerilla warfare, almost always in the colonial conquests of the Western powers. In a way My Lai was routine; what was new about My Lai was that the domestic audience found out. If this [kind of thing had] happened at the end of 19th century and a reporter had known about it, he probably would have shut up.

GAZETTE: Are there mass killings — and I assume we’re leaving out war itself — going on now?

DE SWAAN: I’m afraid so. Two examples that come to mind right away are Darfur, which has not stopped — very tragic and awful ― and the other, of course is ISIS.

GAZETTE: You drill down into the motivations of the perpetrators and poke holes in the idea of the “banality of evil” and the thought that any one of us in a similar situation might behave that way. Can you talk a little about that?

DE SWAAN: There is a rather surprising consensus in the entire literature on mass violence that ordinary people in what they call extraordinary — genocidal — situations commit extraordinary evil.

One could, with many caveats, say that certain characteristics are more likely to occur more frequently with genocidal perpetrators. For example, they have a working conscience, [but] restricted to family, their superiors, and their comrades-in-arms. Everyone else doesn’t count. Now, this is not that unusual a pattern of conscience formation, but usually education tries to inculcate a broader sense of identification with other human beings.

They [also] show a remarkably low sense of agency. This just happened to them, they didn’t know, they didn’t particularly want to, but one thing led to another. That may be an artifact of the fact that most of what we know is from when they appear before judges, so they have an interest in not looking like someone who knowingly and willing committed these acts.

GAZETTE: Is it hard to get at the truth of that part of the picture?

DE SWAAN: Yes, because you must realize that we know very little about these people. First of all, if they’re victorious, they’ll be heroes. If their side is defeated, then maybe some of them will appear before the judges and we’ll find out about them. This was the case in Germany. It was the case in Serbia and Rwanda, but think of China, Indonesia, Pakistan, Russia. It boggles the mind that, of all of these hundreds of thousand of killers, no one ever appeared before a judge. I say it’s one of the safest professions on the planet: mass murder.

The most striking thing is they seem to lack sympathy, compassion, pity. Sometimes it seems as if they don’t know what it is. There is a classic exchange in which the judge said, “Don’t you feel pity for all those you killed?” And the man said, “Oh yes, your honor, it was awful, I got all this blood and brains on my uniform. And the shouting and the shrieking of those women was impossible to bear.” The one he had pity for was the guy with the soiled uniform, which is just eerie if you think of it.

GAZETTE: You also mention the personal preparation — the individual circumstances — that needs to happen. You talked a bit about what Germany and individual Germans went through.

DE SWAAN: The general cultural or specific professional upbringing is enormously important. All Germans were exposed to 12 years of what may be the vilest lies and propaganda and vilification campaign in history. It was relentless; you could not hear alternative truth. And SS training [in particular] was specifically aimed at numbing any kind of compassion in almost perverse ways, sometimes so perverse that you don’t even want to talk about it.

GAZETTE: What do we know about SS training?

DE SWAAN: For example, they were made to shoot their own dogs. Dogs were highly valued, but you had to learn — a true SS man had to learn — to overcome their feelings if it was necessary for the Volk.

GAZETTE: What do you think is most important for the public to understand about these issues?

DE SWAAN: First, how often it occurs, how hard it is to realize that, yes, it really happened, and how difficult it is for any nation face its own crimes.

The Dutch have genocide in their history — in Aceh [Indonesia] — and there’s only one book — by a nonprofessional historian — about it. That’s the Dutch past, more than a century ago, but it was pretty bloody, about 100,000 people. And the terrible history of the Belgians in the Congo is very difficult to face. And the same goes for America.

GAZETTE: Clearly the treatment of Native Americans could qualify, but what’s your point of view on where America’s crimes of this nature have occurred?

DE SWAAN: I’m afraid that the Vietnam War and the bombing of Cambodia were horrible. I do not mention air war [in the book] because of the distance between the perpetrators and victims, but also maybe out of a shared Western blind spot.

Once the German air force was overcome, the Allied forces, the Western forces used the air war very intensely and sometimes very effectively and at relatively little cost. This has served the Western powers very well. And I am among those who have an underdeveloped moral capacity to judge that. So maybe somebody else should stand up and explain what the West has done.

GAZETTE: Dresden and Hiroshima and Nagasaki?

DE SWAAN: I feel very uneasy about it. Even at this very moment, we use bombing from the air. Those who are the object of that, for example ISIS, could say, “Look, they don’t even come out into the open, they’re manipulating their drones and bombing us and our families. Let them come out into a fair fight.”

And then we take literally the moral high ground and criticize them for their barbarous methods. But there must be a discourse going on — on the other side — which is not entirely devoid of moral dimensions. It’s a pity we don’t talk to those guys and those guys don’t talk to us, except in the most horrible way. They have a point and it would be a conversation — and I’ve never had it, nor have you, nor almost any of us. It would be interesting to see how we would come out if it.

DE SWAAN: That sort of deal, yes. But probably they can muster as much moral indignation about our bombings as we can about their beheadings. I’m not saying that the truth lies in the middle. I’m not saying that both parties are equally evil. I’m just saying you might be in for a surprise if you were in an open conversation with one of those people.

GAZETTE: If you look at Nazi Germany, it almost sounds like an entire people were steeped in the propaganda. Is that situation, in a way, being recreated on the Internet, where people with a certain mindset can visit only areas where people who have the same point of view are, and create a similar echo-chamber effect?

DE SWAAN: I don’t know, I don’t much look into those sites. But the amazing thing is that, globally, you can find people exactly like you all over the world and then shield yourself off from any other opinion. So you can be secluded, provincial, parochial, on a global scale.