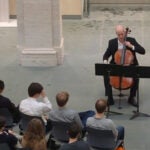 A fountain of music

Alsop reflects on road to helm of Baltimore Symphony Orchestra

She could have been Madonna.

The musical genius at the front of the room was a certified rock star to an excited Handong Park ’18, who worried he was underdressed for the occasion.

“I wouldn’t miss it for the world,” said Park, a flutist and member of the Harvard-Radcliffe Orchestra of the discussion with Marin Alsop, music director of the Baltimore Symphony Orchestra (BSO). Park called the experience of playing for the dynamic conductor when he was young, “One of those moments that you live for.”

Tuesday afternoon offered a Harvard crowd more memorable moments with Alsop, who in 2007, two years after winning a prestigious MacArthur Fellowship, became the first woman to take the helm of a major U.S. orchestra. On campus to receive the Luise Vosgerchian Teaching Award, which is administered by the Learning from Performers Program of the Office for the Arts (OFA), Alsop also engaged in a wide-ranging and entertaining conversation with Dean of Arts and Humanities Diana Sorensen.

Alsop was the perfect choice for the award honoring Vosgerchian (1923-2000), the professor whose “amazing musical expertise and intensity” and gift for spreading “the joy of music” was legendary, said Jack Megan, director of the Office for the Arts, during introductory remarks. The award was established by Professor and Mrs. Ray A. Goldberg and the Max Goldberg Foundation.

Alsop has made music education and community outreach a priority since she was appointed BSO director. In 2008 she used part of her MacArthur grant to create OrchKids, an after-school music program for students in Baltimore neighborhoods. “In a city that is 70 percent African-American, I have one African-American musician in the orchestra,” said Alsop. “I don’t think we can be relevant if we don’t reflect the communities that we live in.”

She added: “The best way to try to change that equation is to get kids connected with playing instruments. I do think that in 20, 25 years it will impact the makeup of the Baltimore Symphony.”

OrchKids is already making inroads. It began with 28 children, currently has 850 participants, and offers much more than just musical training. The skills students hone —concentration, motivation, and discipline — affect “who they are as human beings,” Alsop said.

The conductor’s outreach efforts have extended well beyond the pre-K-12 audience. Along with creating a fellowship for young female conductors, she has developed a program called “Rusty Musicians” that lets amateurs play on stage alongside the orchestra. She is also developing a choir for the parents of OrchKids participants, and is training retiring musicians to become mentors to young students.

But her changes have not always been welcome. When she first introduced the idea for Rusty Musicians, one BSO member responded bluntly: “Perhaps tomorrow I should perform brain surgery.” But the initiative was an instant hit with the public — 400 musicians signed up over 24 hours. Alsop encouraged her professional players to relax their standards and simply “have a human experience.” Today the program is run by the orchestra’s musicians and has blossomed to include a two weeklong fantasy camps, one for amateur musicians and another for educators.

“The musicians themselves own this now,” she said.

Alsop is no stranger to controversy. When she was tapped to lead the BSO some members of the orchestra openly objected to her appointment, saying the search to fill the position had been rushed. She hasn’t forgotten. “It was a very, very challenging moment for me. … It’s something that I try not to think about too often, but it’s one of those things I actually will never get over, to be honest.”

Nonetheless, Alsop “tried to look at the bright side” and counted as a positive the tension between her and some of the musicians. “I didn’t have to spend a lot of time trying to get liked … so we could just get right down to business.” Her goal was to make the orchestra a success, and she did, eliminating its debt, ramping up its recordings, and increasing attendance.

“I think it’s worked out OK in the end,” said Alsop, who also directs the São Paulo Symphony Orchestra. “I have a contract until 2021.”

Like many musicians, Alsop can have a hard time putting aside notions of perfection. Working in Brazil has helped. There, music-making “is a much more visceral, physical” experience, she said, one less concerned with the drive for perfection popular in the United States, and more with the emotions of the piece. “It’s much freer.”

Alsop cited a Harvard grad as a key inspiration behind her approach to conducting.

As a young girl she saw Leonard Bernstein at work and was instantly hooked, deciding almost on the spot that she wanted to be a conductor, and sticking with the dream despite being told by her violin teacher, “Girls don’t do that.” Eventually, in sessions at the Tanglewood Music Center, Alsop learned under Bernstein’s guidance. “The great gift he gave to me was the understanding that every piece has a story,” Alsop said, “and it’s your responsibility to tell that story.”

The daughter of two professional musicians, Alsop seemed destined for the same career. She enrolled at Yale but soon decamped to Juilliard. The decision has become her one real regret in life, she told the Harvard crowd. As a 16-year-old freshman she was “too young” to fully appreciate the importance of a liberal arts education.

“Having a broad education that really can inform [your] music-making, there’s nothing that can replace that.”

Asked by Sorensen about issues of gender, Alsop answered, “I wish I could say I’ve never thought about it.” She confessed that when she envisions a maestro the first image that comes to her mind is that of a distinguished-looking European man with an ascot. “If I have that image, I can imagine that society in general has a similar, if not more entrenched, image.”

To combat the sexism she’s encountered in her career, “a decent sense of humor has helped,” Alsop said. Also, she’s resisted viewing rejection through a gender-specific lens.

“I think never interpreting things in that way was very helpful. I always thought ‘I just have to be better,’ and ‘How can I learn from this experience?’ and ‘How can I try to become more skilled at what I’m doing?’”