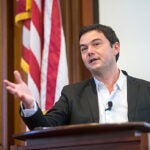 With the world’s largest army, a population four times that of the United States, and an economy that outpaces America’s, it often may seem that this is China’s world and we’re all just living in it.

In “Is the American Century Over?” Nye, a Harvard University Distinguished Service Professor and former dean of Harvard Kennedy School (HKS), answers that question with a qualified no, suggesting that while the United States will not enjoy the unfettered authority to shape world events that it did in the 20th century, few others nations, not even China, will assemble the economic and military hard power along with the soft power of influence — a term Nye famously coined — to assume the leadership role.

The essay summarizes Nye’s work since his 1990 book, “Bound to Lead,” in which he challenged the notion, popularly advanced by British historian Paul Kennedy’s “Lead: The Rise and Fall of the Great Powers,” that America is in decline and its era as a global superpower is over.

Nye sat down with the Gazette to talk about why he thinks the United States will hold onto its political perch, and what events or policies could threaten that status.

GAZETTE: Explain what you mean by “the American Century” and why has it been fashionable to declare that the U.S. as the superpower is over?

NYE: Henry R. Luce, the former editor of Time and Life, proclaimed the American Century in 1941. He proclaimed it because he wanted to get America involved in World War II, and he particularly wanted America to be central to the global balance of power. So I use the term “American Century” in terms of what Luce proclaimed, and ask the question whether in 2041 the Americans will be central to the global balance of power. My conclusion is “yes,” but it won’t be in the same way that Luce expected.

Americans have a long history of believing they’re in decline. And it tells you more about our psychology than about our reality. In the 1960s and ’70s, we thought the Russians or the Soviets were 10 feet tall. Then, in the 1980s, we thought the Japanese were 10 feet tall. And today, many people think the Chinese are 10 feet tall. What I try to do is to show that reflects trends and moods of psychology more than it reflects the realities of world politics. The latest trend of belief that the United States is in decline really starts with the Great Recession of 2008, where people see the declining economy as something that’s going to go on for a long time, or forever, rather than a cyclical change.

GAZETTE: You say America’s dominance is not necessarily a direct result of economic power or military might and that we still have significant soft-power advantages over other countries, including China. What are some of those advantages, and how might we lose our ability to influence world events in the coming years?

NYE: Soft power is the ability to get what you want through attraction rather than coercion or payment. It’s an important component of America’s role in the world. It doesn’t replace the hard power of military capability or economic capability, but it can be what’s sometimes called a “force multiplier,” something that, if used in a smart way with your hard power, can make you more powerful by having hard and soft power reinforce each other. If we were to turn inward, to be less accepting of the rest of the world, [or] if we were to, in contrast, overextend ourselves as I think we did in the Iraq War, we could damage that soft power and undercut our ability to help lead coalitions and networks and alliances that are necessary for being able to provide leadership in the world.

GAZETTE: What challenges does China’s largely internal political focus and the increasing upward mobility of many more of its citizens pose for it?

NYE: The good news for China is that they’ve raised hundreds of millions of people out of poverty and developed a large middle class. The bad news is they haven’t figured out how to bring that middle class into political participation. What we know is that when countries get to about $10,000-per-capita income, there are increased demands for participation. China hasn’t quite figured out how to accommodate that. So that’s one problem they face, what you might call the political transition. Another problem they face is a demographic transition. China’s population is getting older as a result of the one-child policy. And many Chinese say they “fear they’re going to grow old before they grow rich.” A third problem is: Can they adapt their growth model, which has been heavily reliant upon export industries based along the coast, and become more innovative and more oriented toward their domestic market? Their plans are to do that, but they haven’t yet fully accomplished that. They may be able to do this — that’s sometimes called the “middle-income trap,” that you reach a certain level on the growth model that’s worked so far, and then you don’t develop the institutions and the capacity for innovation that take you to the next level.

GAZETTE: You write: “The real problem for the United States is not that it will be overtaken by China or another contender, but that it will be faced with a rise in the power resources of many others — both state and non-state actors,” and that “the U.S. will be less able to control others.” Who are some of these actors, and how will this diffusion of power likely play out?

NYE: Some of the actors are other large states like India, which will be the largest country in the world by population by the middle of this century; Brazil; Indonesia, which is the largest Muslim country in the world; perhaps Nigeria or South Africa — we don’t know how their fates are going to turn out. But the point is there will be many more states that will have more power than they’ve had in the past. In addition to those state actors, there are a lot of non-state actors who are empowered by the information revolution. Perhaps the most dramatic of these would be cyber actors — “hacktivists” and even cybercriminals and other such groups — who are able to do things that often in the past were reserved to governments. So the combination of more state actors and more powerful non-state actors makes a world in which it’s harder to get things done. This is sometimes called entropy, the inability to get work done. ISIS is a very good example of such a non-state actor. But I worry more about entropy than I worry about China.

GAZETTE: Does it dilute America’s overall power, or will it force us to rely on other strategies?

NYE: If we rely on other strategies, we can overcome this. If we see that our role is to organize coalitions and networks to get things done, then we can repair the problems that this creates for American power. But if we think that we can either do it ourselves or opt out of anybody doing it, then we’ll suffer the consequences along with others. If you think of problems like global financial stability or dealing with climate change or dealing with pandemics or dealing with transnational terrorism, these are not problems that we can solve by ourselves. Our ability to manage those problems depends on our ability to organize coalitions with others.

GAZETTE: What are some of the “new transnational issues” that will require the U.S. to exert power with others rather than power over others, and what should the U.S. do to build and bolster our continued primacy?

NYE: One of the things we have to do is to make sure that we support international institutions. We have issues of trade agreements that are coming up before the Congress, some of which are controversial. We have issues like the international Law of the Sea Convention which is very much in our interests, but which has not been ratified by the U.S. Senate because of the opposition of some senators who say it gives away too much of our sovereignty. You have an agreement that was reached in 2010 to increase the emerging markets’ share of the voting quota in the International Monetary Fund, and Congress has not gone ahead and passed that. These are the sorts of things where taking a very narrow view of our self-interest interferes with our being able to accomplish our larger self-interest.

GAZETTE: In the last decade, the U.S. has taken two very different positions regarding foreign policy under Presidents George W. Bush and Barack Obama. How has that swing affected our ability to influence others, and how will the domestic and foreign policy views of our next president affect our standing globally in the coming decade?

NYE: It’s sometimes said that America swings between maximalist policies and retrenchment policies, which is a little different from isolationism in the sense that retrenchment doesn’t mean pulling back as thoroughly as we did in the 1930s. For example, [Dwight] Eisenhower was a president who followed policies of retrenchment. but nobody would call him an isolationist. The question is how far these cycles go, if the extent to which we pull back from the world and pay less attention to the development of international networks and coalitions undercuts our ability to get things done that are in our own interest. We’ll have to see in the 2016 presidential debate(s) how these issues are brought to the public for discussion. I don’t think we’re in danger of isolationism; what we are, though, is in danger of what’s sometimes been called “American exemptionalism,” of giving us a pass on things, like the Law of the Sea ratification or like this new quota for the International Monetary Fund, of opting out. It’s not exactly the same as isolationism, but it’s a failure of international leadership [that] plays well to populist, demagogic pressures.

GAZETTE: In the essay, you say you “guess” the U.S. will “still have primacy in power resources and play the central role in the global balance of power among states in 2041.” What events, actions, or policies could undermine that probability?

NYE: If you had a series of major terrorist attacks using weapons of mass destruction, it’s conceivable that Americans might turn inward [and] become very isolationist. I don’t think it would solve our problems, but that would obviously undercut our ability to lead. Or if we thought that, given the problems in the Middle East, somehow if we just went in there and tried to rule those countries that we would be able to do so, that could lead to the type of setback which we suffered in Iraq, but even more so. And that would also greatly hinder our capacity to lead. Nobody can predict the future, but the swings in mood that we have tell us more about psychology than reality. So what I’ve been trying to do in this work is to get people to look at some real factors and also some potential strategic choices that we face that can make the outcome one way rather than another.