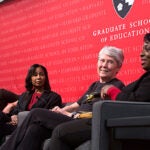 Before appearing onstage for the Askwith Forum at the Harvard Graduate School of Education on Feb. 17, Stephanie Wilson ’88, a NASA astronaut, spoke with the EdCast about the importance of education based in science, technology, engineering, and math (STEM) for women.

Wilson had the opportunity to speak directly to her target audience as 9-year-old Grace Laplante guest co-hosted with Matt Weber for the online broadcast. She discussed her aspirations as a student, her career as an astronaut, and the need for women of all ages to get more involved in STEM-related fields of work and study. Wilson also acknowledged the lack of media representation for female role models, stating that “it’s hard, I think, for young girls to see strong female roles in STEM in the media on a regular and consistent basis.”

Though she agrees that there is much work to be done, Wilson remained positive about the future prospect of women pursuing careers in STEM fields.

NASA astronaut Stephanie Wilson speaks with 9-year-old Grace Laplante about the importance of female role models in STEM careers and her adventures in space, and shares lesser-known facts about astronaut ice cream.