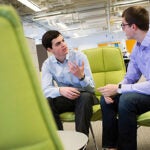 As Greater Boston was thumped by a historic series of storms that dumped 100-plus inches of snow this month, the area’s public transportation system, the Massachusetts Bay Transportation Authority (MBTA), labored mightily to keep trains and buses running on schedule.

But day after day of fresh snowfall that covered rail tracks and roadways, accompanied by frigid temperatures, proved too much for the nation’s oldest subway system. Mechanical failures forced widespread trip cancellations and lengthy service delays on commuter rail and subway lines, leaving frustrated riders running late, or even stranded, on a near-daily basis. Twice the entire system was shut down so the T could dig out buses, clear snow off tracks, and make sure train switches and other electrical components functioned.

The problems prompted the replacement of top officials at Keolis, the French company that runs the commuter rail, and at the MBTA. The MBTA’s general manager, Beverly Scott, abruptly resigned on Feb. 11 amid public furor and criticism from the governor over the T’s spotty service. Scott blamed the breakdowns on outdated equipment that had been patched into service repeatedly because of historically inadequate funding for the agency.

Critics agree and say the T’s problems date back decades, including: skyrocketing costs for fuel, electricity, health care, and federally mandated service for disabled riders, “The Ride”; insufficient funding to meet basic operational needs, despite several fare hikes, that left a $3 billion backlog of maintenance work undone; a $3.3 billion debt burden put on the T by the state during the Big Dig highway project; costly labor and other contracts; and a culture of inefficiency and sometimes mismanagement at the quasi-public agency.

Jose Gomez-Ibanez ’70, M.P.P. ’72, Ph.D. ’75, the Derek C. Bok Professor of Urban Planning and Public Policy jointly at Harvard Kennedy School and Harvard Graduate School of Design, studies transportation, infrastructure, and economic policy. Last week, Gov. Charlie Baker appointed Gomez-Ibanez, along with Harvard’s Executive Vice President Katie Lapp, to serve on an advisory panel that will evaluate the T’s operations and finances to determine how best to reform the agency. The panel is expected to deliver its recommendations by the end of March. Gomez-Ibanez spoke with the Gazette about the MBTA’s recent difficulties and the typical challenges transit systems face in providing an essential, but costly, public service.

GAZETTE: How unusual are the mechanical failures on the subway and commuter rail and the system-wide shutdowns that the MBTA has experienced this winter?

GOMEZ-IBANEZ: I think that it’s very common for big city transit systems to skimp on maintenance. The financial pressures are tremendous, and often there’s a general reluctance to raise taxes or tolls or fares. Moreover, often you can limp along for many years without replacing cars, signal and power distribution systems, etc., on time. And it really only becomes apparent when you have something like these storms, which remind us both how much we depend upon the MBTA for the smooth functioning of the metropolitan area and how much we’ve skimped on maintenance and modernization and renewals over the years.

GAZETTE: Does anyone have a handle on what needs to be done and how much it would cost to bring the entire bus, train, and commuter rail system up to the appropriate standards?

GOMEZ-IBANEZ: There are various estimates of what is known as “the state of good repair” that have been made over the years. I haven’t looked at them closely, so I’m not sure how accurate they are, but they’re all in the several billions of dollars, at least. And given the rates [at which] we have been spending on maintaining and renewing our assets, those calculations [show] the backlog is increasing rather than decreasing.

GAZETTE: What constitutes a “state of good repair”?

GOMEZ-IBANEZ: It means that you replace assets when they’ve worn out, when they’ve reached the end of their useful lives, so that the reliability of the system is maintained. One of the problems is that the procurement process for these public agencies is often very long and cumbersome.

GAZETTE: Why does it take five years to order and receive a new subway car?

GOMEZ-IBANEZ: I wonder that myself. One of the problems is that every rail transit system is a little different. They vary in how tight the curves are, the width of the tunnels, etc. And so it’s not as though you’re just going and picking up some fairly standard product like you could with, say, the typical 40-foot-long transit bus. Everything has to be customized. For example, you can’t operate Orange Line cars on Blue Line track. Even within our system historically, the geometry of the track and right of way varies enough from one line to another that the cars are not really interoperable.

GAZETTE: How far behind does the U.S. lag compared with cities in Europe and Asia, and why? Is it that they place a higher priority on public transportation and see it as an integral part of a city’s smooth functioning?

GOMEZ-IBANEZ: I think that’s part of it. European transit systems receive substantial financial support from their governments, and they operate in a more favorable environment because fuel prices are much higher and their cities are denser. In at least some cases, I think they also benefit from having stronger regional or metropolitan governments than we have. One of the things that’s very difficult is that, in a Philadelphia or a New York or a Boston, the central city is only part of the metropolitan area, and there are different perspectives and priorities in the suburban areas or in the areas of the state that aren’t served by the transit system. And that makes it difficult to figure out how to fund transit in a way that is politically acceptable.

GAZETTE: How well does the T gather and analyze data about ridership and things like traffic and road closures/diversions in order to assess efficiency and optimal delivery of service to meet daily surges in demand?

GOMEZ-IBANEZ: I think the MBTA has been pretty open about sharing data on real-time performance. Several years ago, it allowed private firms access to its real-time information on the locations of buses and subway lines, so that apps like “Next Bus” soon appeared — developed at no cost to the MBTA — which exploit their traffic information to help passengers know when to walk to a stop. So the MBTA has been innovative in that regard, at least.

Adjusting routes to address longer-term changes in travel patterns and needs is more difficult, in part because cutting services is politically controversial, and adding new services is expensive because almost all transit services cannot recover their operating or capital expenses from fares alone. There’s a lot of pressure for service. Most people would like to have a commuter rail line go to their community or to extend a bus line to this senior center or that hospital, but because those services are all money-losing, it’s difficult for the metropolitan transit authority to say yes. And getting the resources to operate a new route by cutting back on an existing route is difficult because cutting a bus route inevitably brings out lots of people who are dependent upon it. You don’t realize how dependent people are on a service until you try to cut it. And that constituency for an existing route is more easily mobilized than the constituency for a new bus route.

In the past 20 years, we’ve greatly expanded the MBTA service, both by extending commuter rail lines and by building the Silver Line and adding new stations on some of the other rail lines. But that has contributed to the financial problems of the T because you need money to operate the new systems as well as build them. For example, the new Greenbush commuter rail line cost $600 million [to build], and the operating cost per passenger is very high.

GAZETTE: What’s the feasibility of privatization or a public-private partnership for certain aspects of the business, and what are the benefits and risks?

GOMEZ-IBANEZ: I think in general you could think about contracting out more or some services or some activities. The Pioneer Institute, for example, argues that we ought to contract out bus maintenance because our costs for doing that are too high. I don’t know whether that’s true or not; I suspect it is. On the other hand, the poor performance of Keolis, the commuter rail operator, in the storms makes it clear that you have to manage these private involvements very carefully.

GAZETTE: Former state transportation secretary Richard Davey was quoted in The Boston Globe as saying, “You can only motivate people with crisis or opportunity when it comes to transportation …” Given how vital public transportation is to a city, why is it subject to such political procrastination?

GOMEZ-IBANEZ: I think it’s partly because these services don’t recover their costs out of the fare box, and so if you want an improvement in service, it often requires raising funds from other sources. And with maintenance and renewals, you have the added problem that the effects of neglect are not immediately obvious, but rather grow slowly and steadily over the years. My colleagues who ride the Red Line have been complaining for years that the reliability of the service was going down.

I think it makes sense for the taxpayer to contribute to the cost of the MBTA, as they do now, primarily in the form of one cent of the state’s sales tax. There are important public benefits to having lots of people use mass transit. It’s what allows the densities of downtown Boston, Harvard Square, Kendall/MIT, and the Longwood Medical Area to be as high as they are, and that density is very important to the productivity of the firms and to the people working there. The other reason for subsidizing it, of course, is that the automobiles don’t pay their way for the congestion and the pollution that they cause. But we want to make sure we are getting good value for money, and that includes maintaining the assets we have.

GAZETTE: Does the fact that the recent T troubles cost local businesses lost productivity and sales suggest we might be able to move forward with some substantive changes?

GOMEZ-IBANEZ: Oh, yes. I’m hopeful that three blizzards is an opportunity to address some long-standing problems because I think it made it clear how dependent the metropolitan area is on our transit system.