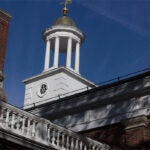 At a Meeting of the Faculty of Arts and Sciences on February 3, 2015, the following Minute was placed upon the records.

Rulan Chao Pian was a true cosmopolitan, a woman who crossed boundaries with quiet courage and grace. Born in Cambridge, Massachusetts, during a period when her father, the Chinese linguist and composer Yuen Ren Chao, taught at Harvard, she spent most of her childhood in various cities in China as well as in Paris, returning to the U.S. at age 16. Pian received her B.A. (1944) and M.A. (1946), both in Western music history, from Radcliffe College, and a Harvard Ph.D. (1960) in East Asian Languages and in Music.

Pian’s career at Harvard reflected professional constraints confronting women of her generation. In 1947, during her graduate studies, she began work at Harvard as a Chinese language teaching fellow. In 1961, the year after receiving her Ph.D., Pian was appointed as a lecturer in both the Departments of Music and East Asian Languages and Civilizations. Only in 1974 was she named a professor, one of the first women to attain this rank at Harvard.

Early on Rulan Pian carried out historical research that provided the basis for her 1967 monograph, Sonq Dynasty Musical Sources and Their Interpretation. Noteworthy for its dual impact on musical scholarship and Chinese studies, this book received the Otto Kinkeldey Award from the American Musicological Society as the best scholarly book of the year. Pian carried out research and published articles on numerous subjects related to Chinese traditional music. She analyzed the workings of rhythm as well as the formal structures of Peking opera arias; unraveled the meaning of little-known musical notations from the distant past and transcribed the music into modern notational systems; documented genres of dance in Northeast China; and explored diversity and interrelationships among East Asian musics from a comparative perspective. Among her widely read later work was a reflexive essay titled “Return of the Native Ethnomusicologist” (1992). Pian also made important contributions well beyond the boundaries of musical studies: her 1961 textbook, A Syllabus for the Mandarin Primer, inspired many who were to become accomplished Sinologists, and Pian’s writings in general clarified the timbrel and melodic relationships between Chinese speech and song.

In the 1960s Pian undertook ethnographic research on Peking Opera in Taiwan, later extending her purview to field sites in Mainland China. An unsung pioneer in the use of then new video technology, Pian recognized early on its potential for capturing ephemeral music and dance performances. She eventually compiled a collection of over five thousand original audio-visual recordings that she donated in 2009 to the library of the Chinese University of Hong Kong.

In addition to her scholarly work and activity as a devoted teacher and mentor, in 1969 Pian founded the Conference on Chinese Oral and Performing Literature (CHINOPERL) in collaboration with other Chinese scholars in North America. A charter member of the Association for Chinese Music Research founded in 1986, Pian served until the end of her life as an anchor for both organizations. Over the years she received many honors: she was named a Fellow of the Academia Sinica (Taiwan, 1990), awarded an Honorary Membership in the Society for Ethnomusicology (2004), and received honorary professorships and fellowships across China, Taiwan, and Hong Kong.

Pian is fondly remembered by all who knew her for having offered both scholarly guidance as well as exceptional hospitality. Her former students recall that her home was always open to them; several of their number lived in the Pian household for periods of time during their student years. Members of the Chinese academic community in Cambridge still transmit tales of the regular monthly meetings held over the years at the Pian home for discussion of Chinese music, literature, and culture, gatherings that came to be known as “New Dialogues in Cambridge” (Kangqiao Xinyu). Invariably, these events ended with the appearance of a large pot of red bean porridge (hongdou xifan) of which all partook. One can only surmise that this culinary tradition was inspired by Pian’s memories of her mother, food writer Buwei Yang Chao, whose book, How to Cook and Eat in Chinese, Rulan had edited and translated into English in collaboration with her father. It is said that this book introduced the terms “stir fry” and “pot sticker” into English.

From 1975-1978 Rulan Pian and her husband, Theodore H. H. Pian, Professor of Aeronautics and Astronautics at the Massachusetts Institute of Technology, served as Co-House Masters of South House (now Cabot House), the first minorities to serve in this capacity at Harvard. Their portraits hang today in the Cabot House Senior Common Room. Following her retirement in 1992, Pian helped compile and edit her father’s complete works, the twenty-volume Zhao Yuanren Quanji (2002-). She also continued to be an active presence in the Music Department and elsewhere on campus, dropping by colleagues’ offices to chat, consulting sources in the library, and attending classes and lectures. Rulan Pian faithfully attended departmental events and regularly brought one of her legendary home-cooked Peking ducks to the Music Department holiday party table.

Professor Rulan Chao Pian died on November 30, 2013, at the age of 91, predeceased by her beloved husband, Ted, in 2009. She is survived by her daughter, Canta Chao-po Pian, and her son- in-law, Michael Lent, of Washington, D.C.; her grand- daughter, Jessica Lent of New York City; and by her three sisters, Nova Huang of Changsha, China, Lensey Namioka of Seattle, and Bella Chiu of Arlington, Massachusetts.