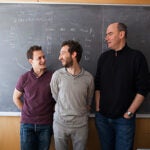 When the National Academy of Sciences (NAS) released a pair of reports this month on geoengineering, which involves deliberately intervening in the climate system to counter global warming, discussion of the controversial topic moved into the mainstream science community. The reports concluded that geoengineering is no silver bullet, and that further research is needed.

David Keith, Gordon McKay Professor of Applied Physics at Harvard School of Engineering and Applied Sciences and professor of public policy at Harvard Kennedy School, has been a leading voice for assessing the risks and implications of large-scale deployment of geoengineering to help cool the planet. Keith’s 2013 book, “A Case for Climate Engineering,” lays out how geoengineering might fit into a larger program for managing climate change (complementing steps to reduce carbon dioxide emissions and devise adaptation strategies).

He recently detailed a potential small-scale solar radiation management experiment in which chemicals would be dispersed in the high atmosphere to reflect sunlight away from the Earth’s surface. He also has suggested a scenario for analyzing the risks and benefits of geoengineering, and proposed frameworks for the governance of geoengineering testing by nation-states.

QUESTION: What is the significance of the National Academy taking up this topic?

KEITH: The academy has dealt with geoengineering as a part of broader energy and climate studies since the late 1970s, but this is the first report devoted to the topic. It serves as a marker of the extent to which solar geoengineering is becoming a more normal part of the science and policy of climate change.

QUESTION: Do the NAS studies bring us closer to deployment of small-scale geoengineering experiments?

KEITH: By endorsing research on solar geoengineering and explicitly including a discussion of small-scale experiments along with a discussion of their scientific merits and possible regulation, I believe the academy has made it easier for government agencies to fund such research. Many program managers in U.S. government science agencies have been favorably inclined to fund research on solar geoengineering but have been held back by a sense that they needed a high-level political OK. My hope is that this report will, de facto, give program managers the confidence to move ahead with science funding even in the absence of an explicit new program.

QUESTION: You’ve made the point that governance of geoengineering is paramount. Do you see a path for establishing international consensus on how to regulate efforts in this area?

KEITH: Consensus, no. But little or nothing is done in the international arena with full consensus. A more reasonable goal is alignment of a coalition of countries that represent a reasonable cross-section of the world, north and south, east and west. Such a coalition might support a broad research program through various mechanisms, from a simple memorandum of understanding to information exchange, which could be a useful first step on the road to multilateral control.

QUESTION: Geoengineering opponents cite the moral hazard argument — that pursuing these approaches will shift the focus away from efforts to reduce emissions of the greenhouse gases that cause warming. Do the NAS reports address this?

KEITH: Not in a deep way, but that is a hard ask. The fundamental job of the academy is to provide assessment about the state of science, including social science, and about the prospects for research.

KEITH: I think the fundamental obstacles are social and political. There is deep concern that any attention to geoengineering will inevitably weaken the political force needed to cut emissions. This is a sensible concern, but not an excuse for deliberate ignorance. If solar geoengineering can provide a meaningful reduction in climate risks for the most vulnerable people and ecosystems, we must take it seriously. It is plausible that the combination of emissions reductions and geoengineering will provide a substantially better environmental outcome than emission reductions alone, and that this fact will make it easier to develop a sustained commitment to reduce emissions.

QUESTION: Some climate engineering proponents argue that approaches like solar radiation management (SRM) have the potential to buy time to make real progress on reducing carbon emissions. Is that the strongest argument for pursuing SRM?

KEITH: Absolutely not. I think this is one of the weakest arguments. The strong argument is that solar geoengineering provides the only known way to substantially reduce climate risk over the next half century.