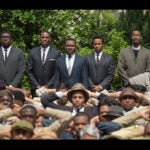 Standing up for ‘Selma’

About a year ago, Jacob Ming-Trent vowed never to play a slave again.

“We need more complex storytelling,” said the actor during an interview on Martin Luther King Jr. Day, recalling the reasons behind the decision. “We need positive images that aren’t all tracking back to me picking cotton.”

But then came an offer for a part in “Father Comes Home From the Wars (Parts 1, 2, & 3),” a new play by the Pulitzer Prize winner Suzan-Lori Parks that follows the life of a Texas slave — Hero — who joins the Confederate Army with his master in return for the promise of freedom.

It’s a complex drama, alternately fierce and funny. One read through the script and Ming-Trent was hooked. He signed on for two roles — as a member of a group of slaves, and as the talking “Odyssey Dog,” a conflicted companion to the protagonist of Parks’ three-hour epic.

It was the playwright’s “different perspective” that convinced Ming-Trent to join up.

“She was saying: ‘We have to reframe this. We can’t allow people who have told the story incorrectly or have left out important details [to] win the day. Sometimes, we have to go back in and say … ‘This is a little more complex.’”

“Father,” which opened Friday, is part of the American Repertory Theater’s Civil War Project marking the 150th anniversary of the nation’s bloodiest conflict. The play is a collaboration with the Public Theater of New York, where it debuted in the fall to strong reviews; it was recently named a finalist for the Edward M. Kennedy Prize for Drama Inspired by American History.

In the first hour, “A Measure of a Man,” Hero struggles with the decision to follow his master into battle. Part two, “A Battle in the Wilderness,” finds Hero and his master separated from their regiment with a captive Union soldier. “The Union of My Confederate Parts” has Hero return to those he left behind to face the choices he made.

Parks — a onetime MacArthur “Genius” and the first African-American woman to win the Pulitzer Prize in Drama, for 2002’s “Topdog/Underdog” — said that in contrast to some of her past work, “Father” developed at a slow burn. Indeed, even now, after six years of work, she’s not done tinkering. Recently she inserted a stage direction for Hero to “hold up his hands reminiscent of ‘Hands up, don’t shoot,’” in reference to the protests that followed the police shooting of Michael Brown in Ferguson, Mo.

Still, the playwright bristled at the notion that “Father” is about race.

“We should not be reduced to a four-letter word,” said Parks, taking a break from a recent rehearsal.

Instead, she said, the play explores a range of emotions and relationships, and asks difficult, sometimes impossible questions about love, honesty, truth, and freedom.

“It touches on things that we are going through, both we of 2015 who are of African descent, and those of us who are not.”

Much of the play, said Ming-Trent, “is about freedom and what is freedom, really. And how do you become free? And once you’ve made the decision to be free or not to be free, what that does.”

The play’s director, Jo Bonney, a white woman from Australia, engaged with the material without a second thought over her superficial distance from it.

“In the end as a director you’re telling a story and the greatest gift that you can be given is a script that is a powerful piece of storytelling. For me, whether I am male or female or what my color is or my background, it’s still a great piece of storytelling and my job is to tell that story.”

So far, so good, as least according to the judgment of a most trusted adviser — Eric Bogosian, the actor-director who also happens to be her husband.

“I always bring him into first previews,” said Bonney, who praised Bogosian as a “primal audience member,” keenly able to gauge if her work is hitting its marks.

“He was so excited to see these kinds of performances on stage,” said Bonney, “and storytelling that was this deep and this funny.”